What happens when an adopted child, or a parent, finds birth relatives on Facebook? 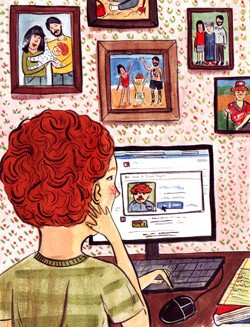 When Wanda Audette’s adopted daughter was 15, she received a MySpace message out of the blue from her birth mother. The message included the woman’s phone number and home address, suggested they meet up, and advised the girl not to tell her parents. “She wanted to have a secret relationship,” says Audette.

Luckily, Audette’s daughter was savvy — or simply skeptical — enough to tell her parents right away. Audette called the birth mother and told her that a secret relationship was unacceptable. The daughter blocked the woman on MySpace, and the family emerged from the situation relatively unscathed.

Not all online confrontations involving adoptive families go so smoothly. As the director of adoption services at the Lund Family Center in Burlington, over the last year Audette has dealt increasingly with the emotional fallout that follows such discoveries. Just last week, she took 10 frantic phone calls from people who were panicking over a relative found via a social-networking site.

Facebook has changed the landscape of adoption. Identifying information used to remain stored in vaults until adopted children came of age. Now most of it — addresses, phone numbers, family photos — is just a mouse click away. All you need is a name. And, because it’s so easy, people on all sides of adoptions are bypassing the support systems that agencies and caseworkers have traditionally provided.

When families choose to navigate a reintroduction, “You really need a third party that doesn’t have any kind of investment in the outcome, who’s there to support and guide, make sure that everyone has an equal voice,” says Audette. Now, adoption agencies are struggling to keep those supportive third parties in the loop. The Lund Family Center has started offering Internet-safety workshops. Other agencies have gone further.

Friends in Adoption in Middletown Springs recently implemented a stringent new policy: When birth and adoptive parents sign their postadoption contracts, they agree to completely swear off all social networking — unless it’s on a closed, password-protected site — until six years later, when the contract is revisited.

“I don’t want to micromanage anyone’s life,” says the agency’s founder and director of postadoption services, Dawn Smith-Pliner. But, after watching the families she works with become more and more distressed by unwanted online contact, she’s decided that putting a moratorium on Facebook and the like is the best option.

“Social networking has taken away the right of the child to be private,” says Smith-Pliner, who raised two adopted children herself. Every kid has a right to “own their own adoption,” she says, and that means deciding when, how and to whom they’d like to tell their story.

Every kid is different, adoption agency officials say. Some are so open, they’ll take their birth mothers to show-and-tell at school. Others prefer not to talk publicly about their adoptions. Throw Facebook into the mix, and suddenly the story is out of the kid’s hands. What if an adoptive family invites their child’s birth mother to his birthday party, and the next day Aunt Betty posts photos of it on Facebook? Whether the kid likes it or not, his relationship with his birth mother is now public.

Social networking can complicate even open adoptions — in which the birth and adoptive parents have an agreed-on relationship that may include anything from regular updates to occasional joint doctor’s-office visits. Smith-Pliner has watched adoptive and birth parents strike up relationships on Facebook before the baby is born. Before long, they’re writing on each other’s walls and messaging like crazy. “And now you have a relationship with a couple that, in your heart, you care about,” says Smith-Pliner. She worries about whether the parties will be able to sustain that relationship after the baby’s birth.

“Adoption isn’t extended family,” says Smith-Pliner. “Adoption is a legal arrangement whereby someone has a baby and signs off their rights to the baby and gives the baby to someone else.” In the old days, adoption agencies often solemnized that agreement by sealing records, keeping birth parents’ identities a mystery. Today, the pendulum has swung to the opposite extreme; open adoption has been the norm since the late 1990s. When you have constant access to each other through Facebook, it’s easy to lose sight of boundaries.

Still, social networking sites have also made the search process easier for agencies looking to make a connection for their client families. In the past, when Smith-Pliner began a search for a birth parent, she’d spend up to $500 on a private investigator for a process that could take months. “Now we go straight to Facebook, and bingo,” she says.

And not all the connections that adopted kids make on their own through social networking turn out badly. The adoptive mother of a 17-year-old in Peacham, who wished to remain anonymous, says her son is happy to have connected with his birth mother, several siblings and extended family through Facebook.

The Peacham teen was never one of those kids dying to dig up his past, but his adoptive mother had long been curious, she says. She knew the birth mother’s name and typed it into Google one night last year. Sure enough, the woman’s Facebook profile popped up — and her photo revealed a dead ringer for her son.

The adoptive mother impulsively showed the page to her son — a naive move, she admits. But luckily, it worked out well. Her son sent a message to one of his five siblings, easily identifiable in the birth mother’s list of friends. He heard back the next day that they wanted to meet him. “He was thrilled,” says his mother. “The look on his face when that message came through, I’ll never forget it.”

These days, the young man keeps in regular touch with his siblings on Facebook and has visited the whole family in Phoenix. His birth and adoptive mothers often talk on the phone, building a relationship that his mom in Peacham says has been both challenging and rewarding. She’s still amazed at her son’s ability to handle the recent addition of a whole new family, which she attributes to his maturity and his generation’s ease with social networking. “For us [adults], it’s a tool of discovery,” she says. “For him, it’s a tool of relationships. It’s how he stays connected.”

So, is it crazy to ask families to swear off social networking for the first few years of an adoption? So far, Smith-Pliner’s policy hasn’t been a deal breaker, though families have certainly been skeptical at the outset, she says, before they hear her reasoning.

The bottom line, Smith-Pliner says, is that reuniting adoptive children with their birth families is difficult, however it happens. “I think inherent in adoption is [the sense that] someone had you, and someone gave you away,” she says. “Those are crass words, but that’s the brutal reality. No matter how lovingly it’s done, no matter the circumstances, you’re with someone for nine months and then you’re not.” The stronger the support system a birth mother and child have, the less likely they are to get hurt when they’re reintroduced, she reasons.

Going forward, Smith-Pliner says, it’s going to be important to work collaboratively with other adoption agencies, to feel out what is and isn’t working. Agencies across the country are facing the issues posed by new technology. “I don’t think we can put our heads in the sand and pretend that we know all the answers,” she says. “All we can do is do our best to keep our kids safe.”

Pretty soon, Smith-Pliner hopes to unveil a password-protected social networking site just for people who have worked with her agency, “a safe space” where they can post photos and build relationships with other parents. Most of all, Smith-Pliner is looking forward to hearing feedback from kids who were adopted through her agency as they grow up — and she says her policies will evolve accordingly.

“It’s going to be our kids who set us straight,” she says. “Our kids are going to tell us, ‘Here’s how you should have done it.’”