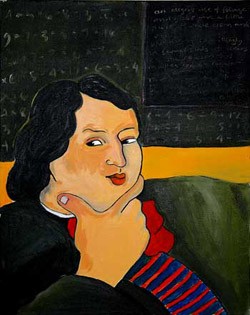 Clifford Irving's 1969 book Fake! is the biography of Elmyr de Hory, scion of an aristocratic Hungarian family, who liquidated a large collection of Picasso drawings in the chaos of post-World War II Europe. De Hory was a classically trained artist who had been a student of Ferdinand Leger's before the war, yet galleries were never interested in his work. Times were tough, and, like most fallen aristocrats, de Hory was penniless. So he was forced to sell his family's cherished folios. Fortunately for him, no one immediately noticed that his supply of "Picassos" was inexhaustible. The "collection" was so vast that he sold thousands of his own drawings signed Picasso, Toulouse-Lautrec, Dufy, Derain, Matisse, Degas, Bonnard, Modigliani and Chagall to gullible art collectors and dealers.

Burlington artist Liza Cowan is not so conniving, yet she has mounted a show in a similar spirit entitled "Fake!" In her artist's statement, Cowan distinguishes copycat paintings such as de Hory's from her own works on canvas or glass: "Forgeries (real fakes, that is, not fake fakes like mine) intend to deceive." Cowan's paintings are intentionally derivative, and the mimicry is masterful. Her 18 "fake fakes" comprise one-half of the inaugural exhibition of her recently established gallery, the spacious Pine Street Art Works.

Cowan never mentions de Hory, but, like the Hungarian artist, she has closely studied Leger. The painting "Color Field" by her doppleganger "Liza Leger," demonstrates a thorough familiarity with the French modernist. Her highly original creation is a reverse painting on the glass of a six-pane window. Peer into the window and the simple, line-drawn female figures, floating in primary-color rectangles, gaze back through the glass. The technique differentiates Liza Leger's chimerical works from her predecessor's real-world canvasses.

Henri Matisse's 1940 "The Romanian Blouse" serves as the departure for "Liza Matisse's" offshoot, "The Romanian Blouse, Red." It's a portrait of a woman in a puffy green blouse in front of a red wall with decorative, monochromatic line patterns. A black-and-white version of the same work is also on display. The window edges and negative space around the figure are painted black; in contrast, the subject glows in a range of grays. The painting is a Cowanesque nod to old black-and-white art history books.

Glass may be Cowan's favorite painting surface, but "Liza Gauguin's" "Mme. Gauguin with Text" is confidently painted on canvas. The simplified drawing style of the portrait is neatly juxtaposed with scrawled, nonsensical mathematical equations in the background. An enigmatic passage from Gertrude Stein's 1914 book Tender Buttons: Objects, Food, Rooms is handwritten behind the sitter. The text and equations are unique to Liza Gauguin; they don't appear in Paul's original.

Cowan isn't the only one paying homage to art history in this show. So does Marshfield artist David Klein in his "Beanie the Singing Dog" series. His 22 whimsical shadow-box sculptures present the cartoonish clay dog Beanie in a variety of masterpiece-inspired mini retables, all roughly 12 by 14 inches.

Considering Marcel Duchamp's penchant for lampooning icons of art history, Klein's "Dog Descending a Staircase" is especially apropos. As in the former's 1912 "Nude Descending a Staircase," images of Beanie's descent are indicated by undergoing changes of value, from a pale-blue Beanie at the top to a heavy, dark-blue Beanie at the foot of the stair.

"The Beanièta," based on Michelangelo's "Pièta," seems to be sliding out of its shadow box. The tangled mass of a powder-blue Beanie mother and son half dangles below the red-framed box. The interior is painted gold, like a medieval icon.

Klein's spoofs and Cowan's fakes are definitely not intended to deceive. It's a fair bet that neither will spend their next 30 years on the lam, as did de Hory, feeling "broke, tired, depressed, sick of hiding and always doing something that had to be hidden." Klein's and Cowan's ruses are too original to hide.