French Horn Players Congregate — and Geek Out — in Plattsburgh 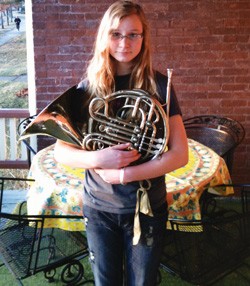 For one year during high school, I played the French horn. Or tried to. The instrument, I learned, is nearly impossible to play. The lip tension, the palate shape, the placement of the hand in the bell and a slew of other factors must be just right before one produces a single note. And the notes that do come out are so often flubbed that the classical world has a name for them: “clams.”

But in the hands of a master horn player the instrument can produce one of the most beautiful sounds in the orchestra: mellow, warm, arrestingly pure. And few pieces of classical music give more pleasure than Mozart’s four horn concertos, the core of the horn repertoire.

So the news that the regional Northeast Horn Workshop was coming to the State University of New York at Plattsburgh this year piqued my interest.

“There’s a certain personality that’s drawn to the horn in the first place,” Ann Ellsworth, co-host of the conference with Donna Yoo, admitted with a laugh before the event, which took place last weekend. “We’re not like trumpet players, who tend to be ultracompetitive. Horn players have always been very collegial because we all struggle with this instrument. It’s basically designed to humiliate us.”

Nearly 90 mostly amateur adult horn players attended what Ellsworth, who teaches at the Plattsburgh and Stony Brook SUNYs and New York University, forewarned was “a total horn geek-out.” The schedule included a mass “horn choir” open to all registrants. There were lectures on the natural horn — a progenitor of the modern instrument direct from the English hunt — cadenza improv classes and master classes.

A Saturday afternoon concert featuring works by 20th-century horn composer Verne Reynolds concluded with the premiere of a work by a Vermonter he inspired: Montpelier composer and horn player Lydia Busler-Blais. The 41-year-old became known as an improvisational horn player, she said, after giving birth 12 years ago: Motherhood left her little time to write down the compositions in her head. Mysterium, a work for two horns she performed with John Little, her partner in the Starlight Horn Duo, is a heady, adventurous piece whose third movement calls for multiphonics — that is, producing horn and vocal sounds at once. As if horn players needed an additional challenge.

There were also plenty of opportunities to brush shoulders with the four horn players of Genghis Barbie. The 2-year-old, Spandex-and-heels-clad quartet from New York bills itself as “the leading post post-feminist feminist all-female horn experience.” Though not because it needs to stand out in a crowded horn-quartet scene.

“In fact, I know hardly any,” admitted the oldest Barbie, 30-year-old Rachel Drehmann, aka Attila the Horn. The Barbies are mainly out for “tongue-in-cheek fun,” she explains, though they play seriously well. The group just auditioned for “America’s Got Talent” and specializes in pop music; the Barbies write most of their own arrangements. Vendors of recondite horn gear on Saturday were selling Genghis Barbie signature colored-enamel bell flares ($950).

While I couldn’t stay for the Barbies’ Saturday night concert — an all-pop affair that included a new Beyoncé song and a piece involving a snare drum — I did catch another performance. The highlight of the conference, from Ellsworth’s point of view, was Vermont’s own Burlington Chamber Orchestra. She arranged for the BCO to be available for hire by Mozart horn concerto players who wanted to experience performing with a professional orchestra.

“You spend so much time and money on gear and lessons,” explained Ellsworth, that players deserve a chance to shine. “I remember the first time I tried it; I was flying,” she said. “I’d never sounded so good before.”

Five individuals spent $350 each for a 10-minute session with the BCO — enough to play one movement of one concerto. Ten-minute stints were also awarded to the two concerto competition winners from that morning — both Ellsworth’s students, though she was not a judge. “At other horn conferences I’ve been to, winners get sheet music,” Ellsworth noted.

The high-school-level winner was New York resident Lee Cyphers, 13, who is one of several horn players in the Vermont Youth Orchestra. Swinging her long blond curls out of the way, Cyphers produced a promisingly mature sound despite numerous, and expected, clams.

BCO members Katie Oprea, an oboist, and Mary Gibson, a violinist, were pleased with the experience — a first for the chamber group. On the ferry ride back to Vermont, they sighed with relief that their sole hour of rehearsal with a brand-new conductor — Yale professor and hornist William Purvis — hadn’t spelled disaster. Clearly demanding of themselves, they were willing to cut horn players a lot more slack.

“I’ve heard [clams] coming out of the best horn players,” commented Gibson, who also plays with the Vermont Symphony Orchestra. “You forgive the foibles more often.”

CORRECTION: The article has been amended to correct Lee Cyphers's state of residence. Also, she is one of several horn players in the VYO, not the "principal."