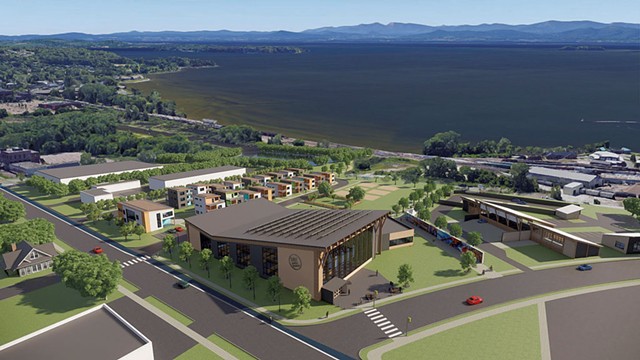 When Burlingtonians pass the no-man's-land on Pine Street — site of the Chittenden Solid Waste District drop-off center and the current farmers market — chances are that they regret its unsightliness, if they notice it at all.

No one asked Catherine Lange, Jamie Gravel and Jane Pickell to imagine a better alternative for that site — certainly not the City of Burlington, which owns the land. Nonetheless, the three architects, all of the Burlington firm Freeman French Freeman, have designed what they believe the site calls for and the city needs: a net-zero residential development with community gardens, a large butterfly-roof pavilion for the farmers market and a redesigned Chittenden Solid Waste District drop-off center, screened from the rest by an "art walk" along a mural-covered wall.

Pie in the sky, for sure — but that was the whole point. As Lange, an associate principal who led the Pine Street team, described the effort, "It was really just an exercise in What does the community want to look like going forward? It was just about dreaming."

The Pine Street Development proposal is part of Freeman's pandemic-era project "Imagine This: Designing a Better Vermont." Led by president Jesse Beck, the project turned the pandemic downturn into an opportunity to develop pro bono proposals for five such underutilized or neglected sites.

"It was just about dreaming." Catherine Lange tweet this

The others are Burlington's shuttered Memorial Auditorium, the bike-unfriendly interstate overpass in South Burlington, the financially troubled Vermont Technical College in Randolph Center, and a fifth project — the only one on private land — which will be unveiled after the site's owner views the plans.

"We decided to give something back to the community," Beck explained during a visit at Freeman's offices. When the virus hit, he recalled, billable work "just dropped right off" for two months. Around the same time, for unrelated reasons, the firm's large CityPlace Burlington project was put on hold.

Then Freeman received a Paycheck Protection Program loan that restored everyone's full salaries and benefits. Reasoning that the firm was benefitting from public money, the president put it to work imagining ways to improve public spaces.

Beck chose the sites. "I see an empty lot or a parking lot, and I say, 'Wow, it would be fun to do something there,'" he said. Among Freeman's more recent projects that have transformed forlorn spaces in Burlington into familiar destinations are the South End's City Market, Onion River Co-op and the new YMCA.

Working in groups of three or four, Freeman's 16 architects developed drawings, SketchUp renderings, charrette boards and PowerPoint presentations of their imagined structures. They did so with a freedom most of them hadn't experienced since architecture school — that is, with zero constraints related to budget, zoning, schedules or client demands. The firm then provided its work to the unsuspecting clients for free. It is also gradually posting the projects on its website for the public to view.

While one or two architects in the firm typically handle big projects such as these, "Imagine This" allowed for wider and multiple collaborations. The team on "A Thriving Vermont Tech," led by principal Shawn Brennan, included Beck, architect Tom Bursey and architectural designer Nathalia Ellis. Focused on making the campus financially viable, their plan calls for divesting or demolishing some buildings and creating, upgrading or repurposing others.

Beck led his team of Ellis, architect Jamie Wagner and associate principal Josh Crandall on reimagining Memorial Auditorium — a building for which he's developed plans for several actual clients in the past decade. All proved financially unviable.

"The building has a lot of foundational problems: the brick, the roof, the mechanical-electrical systems — everything needs to be replaced," he said.

"Memorial Gateway Center" retains only the historic south and east façades and replaces the rest of the building. A swoosh-shaped, two-story glass Burlington Ballroom protrudes from the middle floors of the south façade. It's meant to host public functions and draw the eye of visitors encountering the city's dismal "gateway block" on their way downtown.

The interior plan calls for market-rate senior housing — something that's "badly needed in the city of Burlington," Beck said — on descending floors of independent living, assisted living and memory care. Those living spaces are organized around a central void that ends in an enclosed garden at ground level for safe use by the memory-care patients. A basement pool and a rooftop deck with sun canopies complete the vision.

"The whole idea is to bring in a private developer who can infuse capital," Beck said. "It's a great opportunity to use a historical building everyone has memories of."

Crandall, a former Appalachian Gap cyclist who lives in his native Bristol, has plenty of memories of the reimagined sites. He led the Interstate 89 overpass project with architect Jesse Robbins and Ellis, hand-drawing the designs — a skill that dates back to his days at Pratt Institute, where he studied fine art before switching to a professional undergraduate degree in architecture. 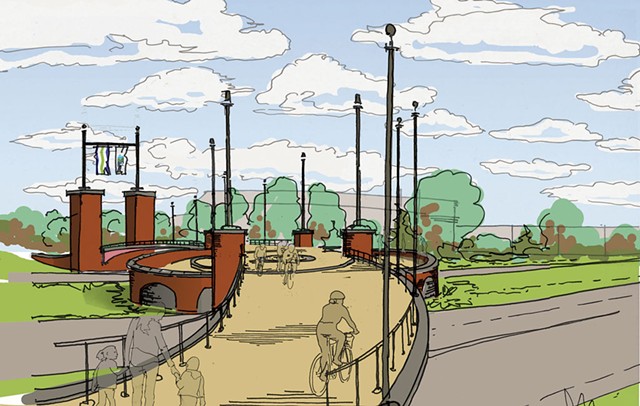 Mainly conceptual, the team's four overpass designs riff on the High Line elevated park in New York City with a wide path that begins at the Staples parking lot, skirts the Exit 14 cloverleaf and bridges the highway. Rather than make it strictly a bike path, Crandall's team enhanced it with rest spots, such as gardens, benches and bike repair stations.

"It's a multidimensional city-planning approach where you slow things down and allow businesses to spring up around the project," Crandall said.

When the team presented the plans to Paul Conner, South Burlington's director of planning and zoning, "He was totally happy and amazed," Beck said. Conner passed the plans to the city council, which presented them to the public in late September. South Burlington has begun construction on a town center behind Trader Joe's, which could make a pedestrian connector between SoBu and Burlington especially useful.

As director of planning for Burlington, David White was the client to whom Freeman presented its Memorial, overpass and Pine Street projects.

"I thought they could all be great additions to our community," said White, who has worked for the city for 25 years.

He was particularly impressed with the detailed plans for Pine Street, which incorporate the city's Railyard Enterprise Project proposal for a new road from Pine Street to Battery Street. Potential problems with the project would be noise from the nearby railroad and recent controversies over adding housing to Pine Street, White said, but overall, the plan "works really well to activate that section of town."

Asked whether such a vision-based approach to development was unusual, White said no.

"The work we do in planning is to try to reimagine places and spaces and stimulate ideas that might not come to fruition," he said. "A tangible example is [the] Moran [Plant]. We've been around that mulberry bush a bunch of times, and finally one of those ideas had legs." He referred to Moran FRAME, designed by Freeman, which is the city's final choice for reusing the industrial waterfront building after considering proposals for 30 years.

"It's super valuable to have folks who take the time to put their heads together and really think through some of these things," White continued. "I hope someone walks through the door and says, 'Hey, I love these ideas. I have a bunch of money, and I want to make it happen.'"