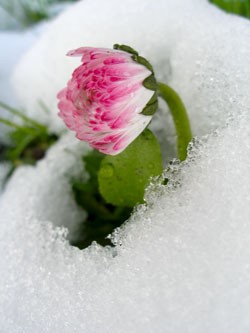 Preparing this year’s Passover Haggadah, I’ve been reading a lot about spring. Passover is a feast of liberation. But, like Easter, it’s also a paschal rite — a celebration of rebirth and regeneration. Jews have our version of Easter eggs (we eat them hard boiled, with salt water) and of the sacrificial Lamb of God: a charred shank on the ritual plate. At our secular, half-vegetarian seder, we roast a PETA-approved beet.

Still, there’s the spring portion of the ritual here and the main story there: Moses in the rushes, blood on the doorpost, the Red Sea and the rest. I’ve always considered the parts to be related, but not that much.

This Passover, however — as skiers eke out their last runs after filing their tax returns, and many sugar makers wake up after down-parka nights hoping in vain for shirtsleeves days — I’ve been struck by how like a New England spring the quest for liberation is.

“You know how it is with an April day,” wrote Robert Frost, whom Donald Hall called the laureate of climatic mutability. It may feel as warm as May, but “if you so much as dare to speak,” you invite a sort of arctic backlash and find yourself “back in the middle of March.”

Yes, we Vermonters know how it is with an April day. And so do others who endure eternal winters and split-second summers. The Japanese, for instance: “Tomorrow I was / Going to the Spring meadows / To pick the young greens. / It snowed all day yesterday / And snowed all day today.” Those lines, from the eighth-century poet Akahito, are among millions penned about the fickleness of spring.

So it is with liberation: tentative, tantalizing, thrilling and unreliable.

The Middle East’s climate is warm-hot-hotter, not a warm-hot-cool-cold one like ours, but the Arab Spring is well named. It started, in fact, in Tunisia’s springtime — the rainy, tepid month of December — when a fruit vendor named Mohamed Bouazizi set himself afire after a municipal inspector humiliated him and confiscated his wares. Bouazizi, Tunisia’s Rosa Parks, had had enough of oppression.

And so had millions of others. Almost overnight, liberation began to bloom like a peach tree in Georgia. Tyrants dropped in Tunisia and Egypt. Algiers was forced to raise wages for public workers. Syrian soldiers refused to fire on protesters. At the Guardian’s interactive time line, you can reel forward and back, as with a video cam, through this amazingly eventful period.

But you don’t just advance in time toward freedom or reverse toward repression. Instead, democracy buds and blossoms in one place and blossoms and perishes in another; elsewhere buds are ripped from the tree. In Egypt’s elections, the Muslim Brotherhood outpolls the young secularists of Tahrir Square by a long shot, raising fears that theocrats will throw a burqa over the seedling of their revolution. Syria’s soldiers defy authority, and then security forces fire on the soldiers. Qaddafi shoots mortars into civilian neighborhoods. Iran arms children to put down demonstrations. Snow falls on the meadows.

Liberation does not follow revolt as summer follows spring — as George W. Bush seemed to believe when he invaded Iraq and Saddam’s statue toppled, and as Barack Obama seemed to believe when he joined NATO’s incursion into Libya. Democracy does not arrive at a port in the same container as start-up capital and blue jeans, as neoliberals insist. In fact, prodemocratic military interventions can exacerbate civil conflicts in which no side favors democracy; and neoliberalism has nourished a doubly poisonous hybrid, free-market totalitarianism.

Freedom takes more than persistence; it takes luck. As any Vermont gardener knows, no combination of soil and compost, sun and rain, cultivation and patience prevents a killing frost from whacking a tomato on the edge of perfect ripeness. But gardening also exploits difficulty. When you grow seedlings, you set them outside in the cold overnight, to toughen them up. Ecce democracy.

In the Passover story, God hardens the Pharaoh’s heart over and over; plague after plague fails to move him to let the Jews go. When I wondered about this strategy — why keep raising the slaves’ hopes, only to dash them? — a friend reminded me that many Jews had become comfortable, or at least resigned, in Egypt. They needed some extra pharaonic wickedness to get them off their butts.

Once roused, the Jews had a long time and a long way to go. And though they finally arrived at the Promised Land, it has turned out, unfortunately, to be some other people’s promised lands, as well. The journey is not over; the world is not healed: The Messiah has not yet come.

Passover celebrates the liberation from slavery, but it’s also about organizing the movement for liberation. Seder gatherers sing songs of victorious battles, like Joshua’s at Jericho, but also commemorate futile ones, like the Warsaw Ghetto uprising. Is this to say that the struggle for freedom is as important as freedom itself? Or is the Messiah’s disinclination to arrive and gather all the Jews into the Promised Land God’s way of hinting that lolling around drinking milk and honey is not the definition of liberation, anyway?

I am sure that the myriad volumes of Torah commentary have much to say on this question (I’ve heard there are more books about Jews than there are Jews). But this recalcitrant spring I turn instead to Vermont’s own Akahito, David Budbill, a Taoist-Buddhist-Methodist who suspects he descends from North African Jews:

gurus of the happy.

Is what it means

To be alive and free.