Freedom of Screech: Our Favorite Reader Comments of 2017 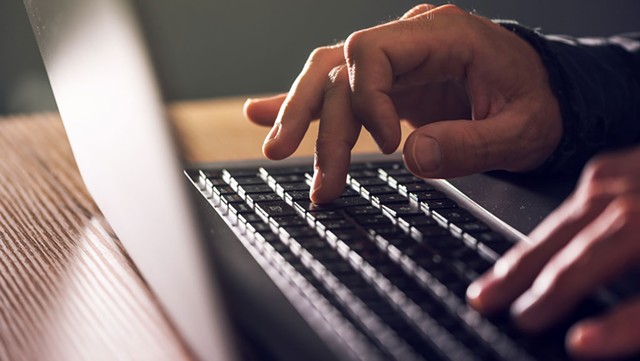 Do I have something witty or useful to say? Will this get me lots of likes? Has State Auditor Doug Hoffer weighed in yet?

Believe it or not, we wade through every comment — the good, the bad and the incomprehensible — to make sure it complies with our commenting policy. Most contributors keep it classy. Inevitably, though, this year's national nastiness trickled down.

Our writers were occasionally the subject of commenters' scorn. But, hey, we've got thick skins. And it was duly — and gratefully — noted when we received compliments of the highest order.

From the nearly 6,200 comments posted on our site in 2017, here are a select few that really stood out to us: the clever, the vitriolic and the random. None of the original spelling, punctuation or grammar has been corrected, and the authors are identified by user names — often pseudonyms. We've spared you the ongoing online debate about that.

Keep 'em coming! Just like you, we'll be reading.

Ed. note: If only it were so simple.

Re: "Stuck in Vermont: Helping HANDS on Christmas," January 5

Eva Sollberger and her Stuck in Vermont series are wonderful treasures.

Re: "The Parmelee Post: Chittenden County to Become Sanctuary for F-35s," January 14

He's paid for this sophomoric drivel?

Ed. note: He actually gets a bonus.

Re: "Got Sleep Apnea? Try Playing a Didgeridoo," January 18

Posted by The Oracle, January 18

Ed. note: We're all just living in a sketch-comedy show.

Re: "Rebels No More: SBHS Student Isaiah Hines on the End of the Rebels Nickname," February 2

Re: "Richmond Passes Resolution Welcoming All People to Town," March 7

Except gingers. Those pastey-faced bastards can hide from the sun somewhere else.

Re: "The Parmelee Post: Generous Barista Adds Beard Dandruff to Drinks at No Extra Cost," March 10

Dying is easy. Comedy is hard.

Congratulations to all of the commenters who through hard work and perseverance had the good fortune to be born in the United States - you really earned your smug sense of superiority!

Ed. note: Gonna need some ice for that burn.

Re: "Watchdog Whistle: This Vermont News Website Tilts to the Right," March 29

good god Seven Days, please tell me you're paying hack Walters with circus peanuts or fake MBTA tokens or something else that's straight-up worthless. Otherwise, you're getting ripped off.

Charles Murray is what dumb people think a smart person sounds like.

Ed. note: If he were allowed to speak, that is..

Re: "Scott Vetoes Marijuana Legalization in Vermont," May 24

Certainly are a lot of tweaked potheads out there, chill out! VT has a history of doing things the right way, we'll get there.

Posted by Bob Frazier, May 24

Hannah, a crawfish is not a mollusk. It is a crustacean.

Posted by John Yackovetsky, May 24

Ed. note: Whoops! What the shell.

Why do all of John Walter's stories' titles start with his name? Is this to warn the reader or something? This doesn't happen with Seven Day's other writers.

Posted by Muffy on May 4

Ed note: It's to signal he's an opinion writer. You've been warned.

Wrap in Tyvek and call it a day.

Posted by Christopher W. on July 1

How long is the hot dog eating contest, what time is it? Most importantly, what do you win? If cash or gift cards,in. What denominagion(s)?

Re: "What's Up With Burlington's Phallic Mushroom Sculpture?" September 27

Posted by The Oracle, September 27

Ed. note: Come for the story, stay for the medical advice.

Ed. note: Sounds like someone needs some ice cream!

I've never heard of Mr. Kisonak, but judging by his review, I'm guessing he's an old curmudgeon who in his spare time sits on his porch yelling at any young children passing by to keep moving and stay off his lawn!

Ed. note: To the spoiler goes the blame.

Hopefully this isn't some sordid combination of too much Breaking Bad and lingering tensions from last weeks game of Bridge.

Re: "I'll Be Droned for Christmas: A Seasonal Tale From Church Street," November 29

Re: "FBI: Wake Robin Resident Said She Made Toxic Ricin, Fed It to Others," December 1

Why can two people in a row not spell castor beans correctly when it's literally in the article you're commenting on?

I think we need to form a committee and study this more. Maybe I'll buy something next Xmas. Or the one after.

Vermont really needs to step up it's game, New Hampshire has Vermin Supreme and all we get is this batch of sad sacks.

Thank you SevenDays for not needlessly playing into the hysteria and lazy media narrative that these are Russian generated comments.