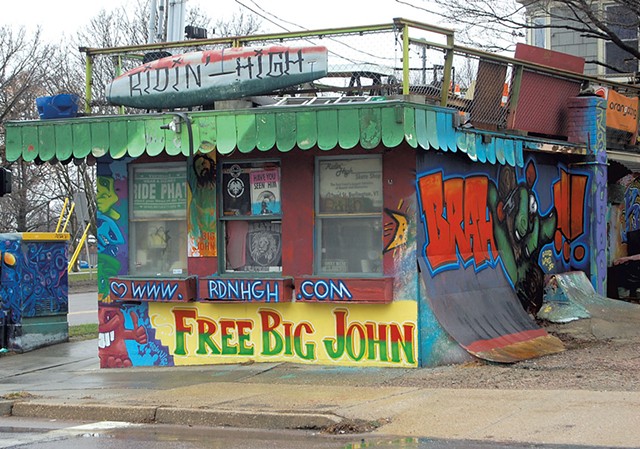 Supporters of Ridin' High founder John Van Hazinga have been demanding his release ever since he was jailed last summer for dealing pot at his Burlington skate shop. They have repainted the shop's exterior with the message "FREE BIG JOHN," and more than 1,000 have signed an online petition protesting his incarceration for selling a plant "that countless businesses in other states are actively commercializing."

The cannabis cause célèbre mellowed last month after Van Hazinga agreed to plead guilty to a single federal charge of marijuana distribution. His sentencing is scheduled for June and, under normal circumstances, he might be out of prison by fall.

Those months could make all the difference, however, as the coronavirus pandemic sweeps through the state prison where Van Hazinga is awaiting his sentence. The first employee at Northwest State Correctional Facility in St. Albans tested positive on April 1. The next day, Van Hazinga's attorney, Paul Volk, filed an emergency motion asking a federal judge to free his client in light of the risk to inmates. A lung condition makes Van Hazinga especially vulnerable, Volk argued at a later hearing.

It took just a week for U.S. District Judge Christina Reiss to hear Van Hazinga's case — light speed, by federal standards — and side with him over the objection of the U.S. Attorney's Office. Reiss granted his release from federal custody on April 9, just hours before test results revealed that 50 inmates and staff at Northwest were already infected with COVID-19.

Yet "Big John" remains locked up on a state charge without a date for release. And as he waits his turn to plead to the next legal gatekeeper, he may be running out of time.

"This is a real emergency," his attorney said.

Virtually everyone with a stake in criminal justice in Vermont agrees that holding fewer inmates will reduce the risk and severity of coronavirus outbreaks in prisons. The fraught questions have been who to release, and how. That debate has underscored the ways in which the state's criminal justice system is struggling to keep pace with COVID-19's spread.

"We know that hours and days can make a huge difference," said James Lyall, executive director of the American Civil Liberties Union of Vermont. "We need to move faster."

In the month since Gov. Phil Scott declared a state of emergency, Vermont's prison population — which includes federal and state inmates across six facilities, plus those housed at a private prison in Mississippi — has declined from 1,649 to 1,413. The unprecedented 14 percent drop appears to be the result of a collective effort by law enforcement, the courts and the Vermont Department of Corrections, which has relaxed some early release requirements.

Defense attorneys and civil liberties advocates insist it's not enough. They say many elderly and medically compromised inmates are still trapped in close quarters without adequate supplies or medical support.

But state officials have signaled that they aren't interested in further aggressive action. At an April 10 press conference, Secretary of Human Services Mike Smith described the state's elderly inmates as "hard-core criminals" who will not be released.

Nevertheless, much of the authority over who enters and leaves Vermont prisons rests with the courts, not bureaucrats. Accordingly, prosecutors and judges have been scrambling to respond to a stream of inmates' emergency requests for release. With the recent outbreak at Northwest, they may soon be overwhelmed.

"We are getting this more and more every day, like constantly," U.S. Attorney Christina Nolan said.

Whether the onslaught of requests will result in a smaller prison population that could ease any virus outbreak hinges on judges' appetites for early release, said Emily Tredeau, supervising attorney for the state Prisoners' Rights Office.

"It could make a huge difference, depending on how far they go," she said.

Before the outbreak at Northwest, defense attorneys had filed about 50 motions for release around the state, according to Chief Superior Judge Brian Grearson. In late March, Grearson assigned all pending and anticipated hearings to a single judge, John Pacht, in Chittenden County. In an email, Grearson said he issued the order for logistical reasons and to achieve "consistency of rulings on a common issue." Since the outbreak at Northwest, he has added two more judges to handle the spike in motions.

Essex County State's Attorney Vincent Illuzzi said he's been inundated with motions for bail review from every detainee in the county. The motions tend to be drawn up using the same template and often include an affidavit from the same Yale University physician who notes shortcomings in the state correctional system's coronavirus readiness.

Illuzzi said he has formally opposed the motions because the few detainees in his rural Northeast Kingdom county are held for good reason: They are charged with violent offenses or have a history of missing court dates, he said. In one of the motions, a defendant proposed to live with a woman he'd been convicted of assaulting — a request Illuzzi said might "be laughed out of court" in more normal times.

"In some cases, it's an opportunity to take advantage of the situation," he said of petitioners.

A judge sided with Illuzzi on several early requests, but last week, he said he lost to a defendant who had multiple failures to appear in court, had breached a confidential informant agreement with police and had been extradited from New Hampshire. "I think the judges are being sympathetic," Illuzzi reasoned.

But even sympathetic judges still adhere to rules that can seem byzantine during a fast-moving pandemic. Judge Reiss delayed ruling by a week on a contested motion for compassionate release filed by Brian Hoskins, an asthmatic inmate, because he couldn't prove that he had first emailed a request to the Federal Bureau of Prisons. Hoskins is incarcerated at FCI Danbury, a Connecticut facility where at least 83 inmates and staff have been infected.

Late last month, Vermont lawmakers sidelined a proposal to expand the circumstances in which judges may reconsider an inmate's sentence, fearing that a contentious debate would jeopardize other emergency legislation. Some lawmakers expressed specific concern about public backlash if the courts released inmates who had been convicted of particularly heinous crimes.

In addition to calling upon the governor to hasten prison releases using an executive order, the ACLU of Vermont also sent letters to each state's attorney last week pressing them to explain their position on a slate of incarceration-reducing steps.

The prosecutors responded collectively on Tuesday, urging the ACLU to focus instead on improving housing and community services for returning prisoners.

In an interview, the ACLU's Lyall accused Smith, the human services secretary, of cherry-picking the numbers to portray inmates as the "worst of the worst," and he called for the department to provide complete data. The Department of Corrections has acknowledged that more than 40 percent of the inmates still behind bars have medical issues that could put them at high risk for complications from the virus.

Using publicly available data, Seven Days compiled a list of the 28 inmates who were moved last week from Northwest to the Northeast Correctional Complex in St. Johnsbury, which the state has repurposed as a quarantine facility for prisoners who have the coronavirus.

They ranged in age from 21 to 59. Some were listed as detained pending trial, and at least eight had pending federal charges, a Seven Days analysis found. One of the men, Michael Hayes, had filed a motion for release just days before the move, citing the risk of infection. Hayes, whose attorney did not respond to a request for comment, faces federal weapons charges in connection with a homicide investigation.

Federal prosecutors are not taking a blanket position on such motions and will consider an inmate's medical history and prison conditions in deciding whether to contest their release, Nolan said. Her office has opposed many of the motions filed in recent weeks.

In Van Hazinga's case, the government cited his history of parole and probation violations to suggest that he would pose a public health risk if released. His noncompliant behavior suggested that he might disregard social distancing orders, federal prosecutors wrote.

During the emergency hearing conducted before Reiss by telephone, Van Hazinga's attorney surprised prosecutors by revealing that his 42-year-old client has reduced lung capacity, which could put him at risk if he contracts COVID-19.

Volk claimed that Van Hazinga's condition stemmed from a well-documented skateboarding crash in 2007 that left "Big John" in a coma. His lung problems are also described in a series of public blog posts that family members published while he was hospitalized after the crash, Seven Days found.

When Reiss told Van Hazinga she would be wary of releasing him because of lung problems only to have him continue to be a "daily marijuana user," the longtime voice for legalization eagerly renounced his affection for the drug.

"I am proud to not have used cannabis since last year," he told the judge.

Reiss granted his release, but it was only the first step toward freedom. Van Hazinga was on state parole at the time of his federal arrest, so he is also being held on a warrant for violating the terms of his parole, Volk said.

His real fate, then, rests with the Vermont Parole Board — but the next scheduled parole hearing for Northwest inmates isn't until May 5. Volk said he plans to ask the board to release Van Hazinga before then, noting that "there's no way John is the only one" detained on suspicion of violating parole.

In an email, Parole Board director Mary Jane Ainsworth said the board has yet to receive any requests to rearrange its schedule in light of the coronavirus but that it would "review" one should it arrive.

In the meantime, all inmates at the Northwest prison were tested for COVID-19 last week. Volk said Van Hazinga had not been told the result of his test.

"He's hopeful that is an indication that he and the other folks who are in his pod are not positive," Volk said.