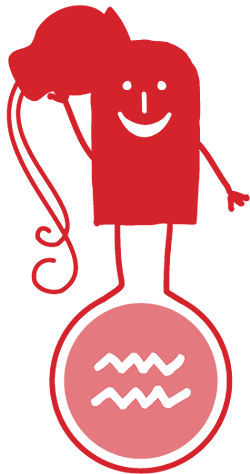 AQUARIUS (Jan. 20-Feb. 18): A London-based think tank does an annual study to determine which of the world's countries offers the most freedom. The Legatum Institute measures indicators like civil liberties, social tolerance and the power to choose one's destiny. The current champion is Luxembourg. Canada is in second place. France is 22nd, the U.S. is 26th and Italy 27th. Since I'm hoping you will markedly enhance your own personal freedom in the coming months, you might want to consider moving to Luxembourg. If that's not an option, what else could you do? The time is ripe to hatch your liberation plans.

PISCES (Feb. 19-March 20): I love to see dumpsters that have been decorated by graffiti artists. Right now there's one by the side of a busy road that I often drive down. Its drab gray exterior has been transformed into a splash of cartoon images and scripts. Amidst signatures that look like "Riot Goof" and "Breakfast Toys" and "Sky Blooms," I can discern a ninja rhinoceros, a gold-crowned jaguar and an army of flying monkeys using squirt guns to douse a forest fire. I suspect it's a perfect time to for you to be inspired by this spectacle, Pisces. What dumpster-like situation could you beautify?

ARIES (March 21-April 19): Westward Ho! is the name of a village in southwestern England. Its name is impressive because of the exclamation point. But it's not as dramatic as that of the only town on Earth with two exclamation points: Saint-Louis-du-Ha! Ha!, which is in Québec. I invite you Aries folks to be equally daring. According to my reading of the astrological omens, you have a cosmic mandate and poetic license to cram extra !!!!s into all your writing and speaking, and even add them to the spelling of your name! Why? Because this should be one of the most exciting and ebullient phases of your astrological cycle — a time to risk showing just how enthusiastic and energetic you are!!!!!

TAURUS (April 20-May 20): The New York Film Critics Circle named Casey Affleck the best actor of the year for his role in the film Manchester by the Sea. In his acceptance speech at the award ceremony, Affleck gave a dramatic reading of quotes by David Edelstein, a prominent critic who has criticized his work. "Mumbly and mulish," was one of Edelstein's jabs about Affleck. "Doesn't have a lot of variety," was another. A third: "Whenever I see Affleck's name in a movie's credits, you can expect a standard, genre B picture — slowed down and tarted up." I suspect that in the coming weeks, Taurus, you may get a vindication comparable to Affleck's. I suggest you have wicked fun with it, as he did.

GEMINI (May 21-June 20): The roulette wheels at casinos in Monaco have 37 pockets. Eighteen are black, 18 are red and one is green. On any particular spin, the ball has just less than half a chance of landing in a red or black pocket. But there was one night back in August of 1913, at the Casino de Monte-Carlo, when probability seemed inoperative. The little white ball kept landing on the black over and over again. Gamblers responded by increasingly placing heavy bets on red numbers. They assumed the weird luck would soon change. But it didn't until the 27th spin. (The odds of that happening were 136,823,184 to 1.) What does this have to do with you? I suspect you're in a comparable situation — the equivalent of about 20 spins into an improbable streak. My advice: Don't bet on the red yet.

CANCER (June 21-July 22): Born to a religious mother on July 8, 1839, John D. Rockefeller amassed a fortune in the oil industry. Even in comparison to modern billionaires like Bill Gates and Warren Buffet, he's the richest American who ever lived. "God gave me the money," he said on numerous occasions. Now I'm going to borrow the spirit of Rockefeller's motto for your use, Cancerian. Why? Because it's likely you will be the recipient of blessings that prompt you to wonder if the Divine Wow is involved. One of these may indeed be financial in nature. (PS: Such boons are even more likely to transpire if you're anchored in your sweet, dark wisdom and your holy, playful creativity.)

LEO (July 23-Aug. 22): What influence do you need most in your life right now? Are you suffering because you lack a particular kind of help or teaching? Would you benefit from having a certain connection that you have not yet figured out how to make? Is there a person or event that could heal you if you had a better understanding about how you need to be healed? The coming weeks will be a favorable time to get useful answers to these questions — and then take action based on what you discover.

VIRGO (Aug. 23-Sept. 22): The next two weeks will be a favorable time to kiss the feet of helpful allies, but not to kiss the butts of clever manipulators. I also advise you to perform acts of generosity for those who will use your gifts intelligently, but not for those who will waste your blessings or treat you like a doormat. Here's my third point: Consider returning to an old fork in the road where you made a wrong turn, and then making the correct turn this time. But if you do, be motivated by bright hope for a different future rather than by sludgy remorse for your error.

LIBRA (Sept. 23-Oct. 22): In the beginning was the wild cabbage. Our ancestors found that it had great potential as food and proceeded to domesticate it. Over the centuries, they used selective breeding to develop many further variations on the original. Kale and kohlrabi were the first to appear. By the 15th century, cauliflower had been created. Broccoli came along a hundred years later, followed by Brussels sprouts. Today there are at least 20 cultivars whose lineage can be traced back to the wild cabbage. In my astrological opinion, you Libras are in a wild cabbage phase of your long-term cycle. In the coming months you can and should do seminal work that will ultimately generate an abundance of useful derivatives.

SCORPIO (Oct. 23-Nov. 21): In 1733, workers finished building the New Cathedral in Salamanca, Spain. But if you go there today, you will see two seemingly modern elements on one facade: carvings of a helmeted astronaut and of a gargoyle licking an ice cream cone. These two characters were added by craftsmen who did renovations on the cathedral in 1992. I offer this vignette as a metaphor for your life, Scorpio. It's a favorable time to upgrade and refine an old structure in your life. And if you do take advantage of this opening, I suggest you add modern touches.

SAGITTARIUS (Nov. 22-Dec. 21): I suspect that in the coming weeks, you will be afforded opportunities to bend the rules in ways that could make life simpler, more pleasurable and more successful — or all of the above. To help you deal with the issue of whether these deviations would have integrity, I offer you these questions: Would bending the rules serve a higher good, not just your selfish desires? Is there an approach to bending the rules that may ultimately produce more compassionate results than not bending the rules? Could you actually get away with bending the rules, both in the sense of escaping punishment and also in the sense of being loyal to your own conscience?

CAPRICORN (Dec. 22-Jan. 19): I don't necessarily guarantee that you will acquire paranormal powers in the coming weeks. I'm not saying that you will be able to foretell the future or eavesdrop on conversations from a half-mile away or transform water into whiskey-flavored coffee. But I do suspect that you will at least tap further into a unique personal ability that has been mostly just potential up until now. Or you may finally start using a resource that has been available for a long time. For best results, open your imagination to the possibility that you possess dormant magic.