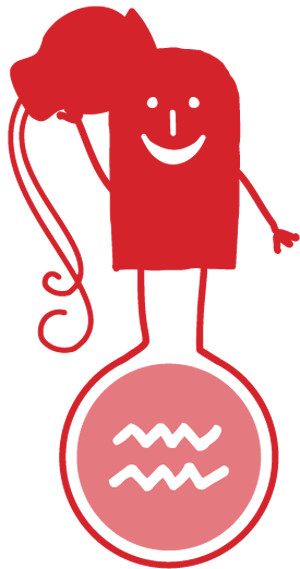 ARIES (March 21-April 19): Do you have an entourage or posse that helps you work magic you can't conjure up alone? Is there a group of coconspirators that prods you to be brave and farseeing? If not, try to whip one up. And if you do have an inspirational crew, brainstorm about some new adventures for all of you to embark on. Scheme and dream about the smart risks and educational thrills you could attempt together. According to my reading of the astrological omens, you especially need the sparkle and rumble that a feisty band of allies can incite.

TAURUS (April 20-May 20): The cosmos seems to be granting you a license to be brazenly ambitious. I'm not sure how long this boost will last, so I suggest you capitalize on it while it's surging. What achievement have you always felt insufficiently prepared or powerful to accomplish? What person or club or game have you considered to be out of your league? What issue have you feared was beyond your understanding? Rethink your assumptions. At least one of those "impossibilities" may be more possible than usual.

GEMINI (May 21-June 20): When I attended the University of California at Santa Cruz, my smartest friend was Gemini writer Clare Cavanagh. She headed off to Harvard for her graduate studies, and later became a preeminent translator of Polish poetry. Her work has been so skillful that Nobel Prize-winning Polish poet Czselaw Milosz selected her as his authorized biographer. Interviewing Milosz was a tough job, Clare told blogger Cynthia Haven. He was demanding. He insisted that she come up with "questions no one's asked me yet." And she did just that, of course. Formulating evocative questions is a Gemini specialty. I invite you to exercise that talent to the hilt in the coming week. It's prime time for you to celebrate a Curiosity Festival.

CANCER (June 21-July 22): "Somewhere someone is traveling furiously toward you," writes poet John Ashbery, "at incredible speed, traveling day and night, through blizzards and desert heat, across torrents, through narrow passes. But will he know where to find you, recognize you when he sees you, give you the thing he has for you?" This passage might not be literally true, Cancerian. There may be no special person who is headed your way from a great distance, driven by a rapt intention to offer you a blessing. But I think Ashbery's scenario is accurate in a metaphorical way. Life is in fact working overtime to bring you gifts and help. Make sure you cooperate! Heighten your receptivity. Have a nice long talk with yourself, explaining why you deserve such beneficence.

LEO (July 23-Aug. 22): In 1768, Britain's Royal Society commissioned navigator James Cook to lead a long naval voyage west to Tahiti, where he and his team were supposed to study the planet Venus as it made a rare transit across the face of the sun. But it turned out that task was a prelude. Once the transit was done, Cook opened the sealed orders he had been given before leaving England. They revealed a second, bigger assignment, kept secret until then: to reconnoiter the rumored continent that lay west of Tahiti. In the coming months, he became the first European to visit the east coast of Australia. I foresee a comparable progression for you, Leo. The task you've been working on lately has been a prelude. Soon you'll receive your "sealed orders" for the next leg of your journey.

VIRGO (Aug. 23-Sept. 22): According to computer security company Symantec, you're not in major danger of contracting an online virus from a porn website. The risk is much greater when you visit religious websites. Why? They're often built by inexperienced programmers, and as a result are more susceptible to hackers' attacks. In the coming weeks, Virgo, there may be a similar principle at work in your life. I suspect you're more likely to be undermined by nice, polite people than raw, rowdy folks. I'm not advising you to avoid the do-gooders and sweet faces. Just be careful that their naïveté doesn't cause problems. And in the meantime, check out what the raw, rowdy folks are up to.

LIBRA (Sept. 23-Oct. 22): Life has a big, tough assignment for you. Let's hope you're up for the challenge. There's not much wiggle room, I'm afraid. Here it is: You must agree to experience more joy and pleasure. The quest for delight and enchantment has to rise to the top of your priority list. To be mildly entertained isn't enough. To be satisfied with lukewarm arousal is forbidden. It's your sacred duty to overflow with sweet fulfillment and interesting bliss. Find ways to make it happen!

SCORPIO (Oct. 23-Nov. 21): You may have never sampled the southeast Asian fruit called durian. It's controversial. Some people regard it as the "king of fruits," and describe its taste as sweet and delicious. Naturalist Alfred Russel Wallace said it was like "a rich custard highly flavored with almonds." But other people find the durian unlikable, comparing its aroma to turpentine or decaying onions. TV chef Anthony Bourdain asserts that its "indescribable" taste is "something you will either love or despise." I foresee the possibility that your imminent future will have metaphorical resemblances to the durian, Scorpio. My advice? Don't take things personally.

SAGITTARIUS (Nov. 22-Dec. 21): Talking will be your art form in the coming week. It'll be healing and catalytic. You could set personal records for most engaging phone conversations, emails, text messages, and face-to-face dialogs. The sheer intensity of your self-expression could intimidate some people, excite others, and generate shifts in your social life. Here are a few tips to ensure the best results. First, listen as passionately as you speak. Second, make it your intention to communicate, not just unload your thoughts. Tailor your messages for your specific audience. Third, reflect on the sometimes surprising revelations that emerge from you. They'll give you new insights into yourself.

CAPRICORN (Dec. 22-Jan. 19): Let's say you want to buy an 18-karat gold ring. To get that much gold, miners had to excavate and move six tons of rock. Then they doused the rock with poisonous cyanide, a chemical that's necessary to extract the good stuff. In the process, they created toxic waste. Is the gold ring worth that much trouble? While you ponder that, let me ask you a different question. What if I told you that over the course of the next five months, you could do what's necessary to obtain a metaphorical version of a gold ring? And although you would have to process the equivalent of six tons of raw material to get it, you wouldn't have to use poison or make a mess. Would you do it?

AQUARIUS (Jan. 20-Feb. 18): In 1899, the King of the African nation of Swaziland died while dancing. His only son, Sobhuza, was soon crowned as his successor, despite being just 4 months old. It took a while for the new King to carry out his duties with aplomb, and he needed major guidance from his grandmother and uncle. Eventually he showed great aptitude for the job, though, and ruled until his death at age 83. I'm getting a Sobhuza-type vibe as I meditate on you, Aquarius. New power may come to you before you're fully ready to wield it. But I have confidence you will grow into it, especially if you're not shy about seeking help.

PISCES (Feb. 19-March 20): In the 1951 animated movie version of Alice in Wonderland, Alice says to herself, "I give myself very good advice, but I very seldom follow it." I hope you won't be like her, Pisces. It's an excellent time for you to heed your own good advice. In fact, I suspect that doing so will be crucial to your ability to make smart decisions and solve a knotty problem. This is one of those turning points when you really have to practice what you preach. You've got to walk your talk.