Free to Be Furry? Group Fights to Wear Animal Costumes in Burlington 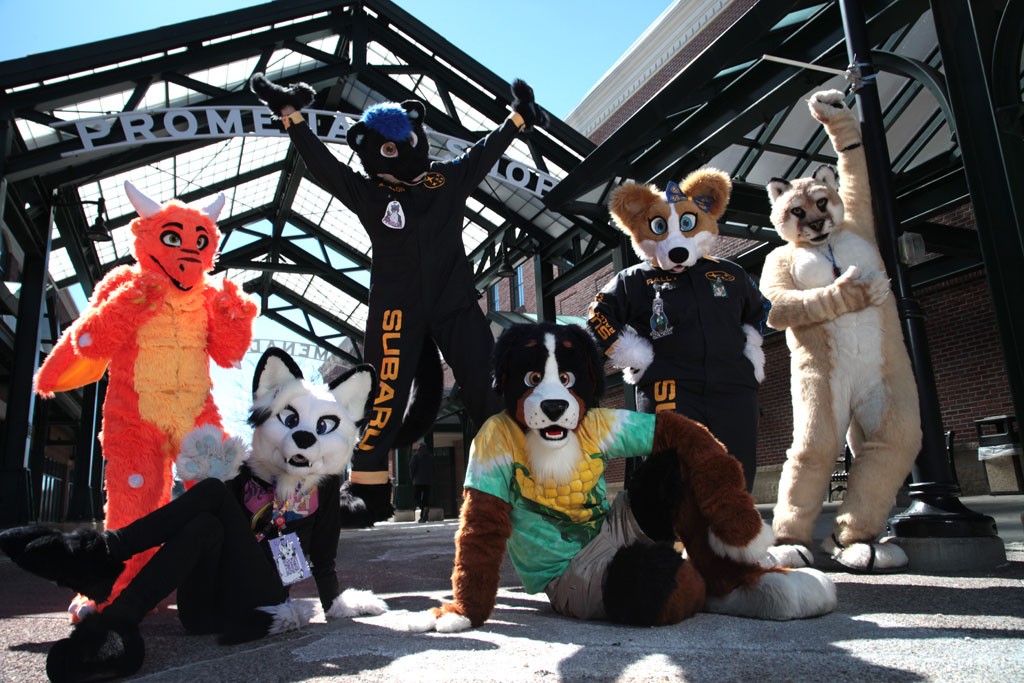 Jessica Owens is 32 years old, lives in Milton and works as a secretary. On a rainy night last week, she agreed to meet at Wicked Wings in Essex Junction. She showed up in a black sweatshirt, but on a different day, might have been dressed in her custom-made corgi suit.

Owens is part of a subculture of people called "furries" who are passionate about anthropomorphized cartoon animals. Conventions across the country attract thousands; many come wearing bespoke hirsute costumes.

Joined at the restaurant by two fellow furries — her husband, Jonathan, and a friend, Rob — Owens explained the particulars of furry culture with the rehearsed manner of someone used to dispelling misconceptions. 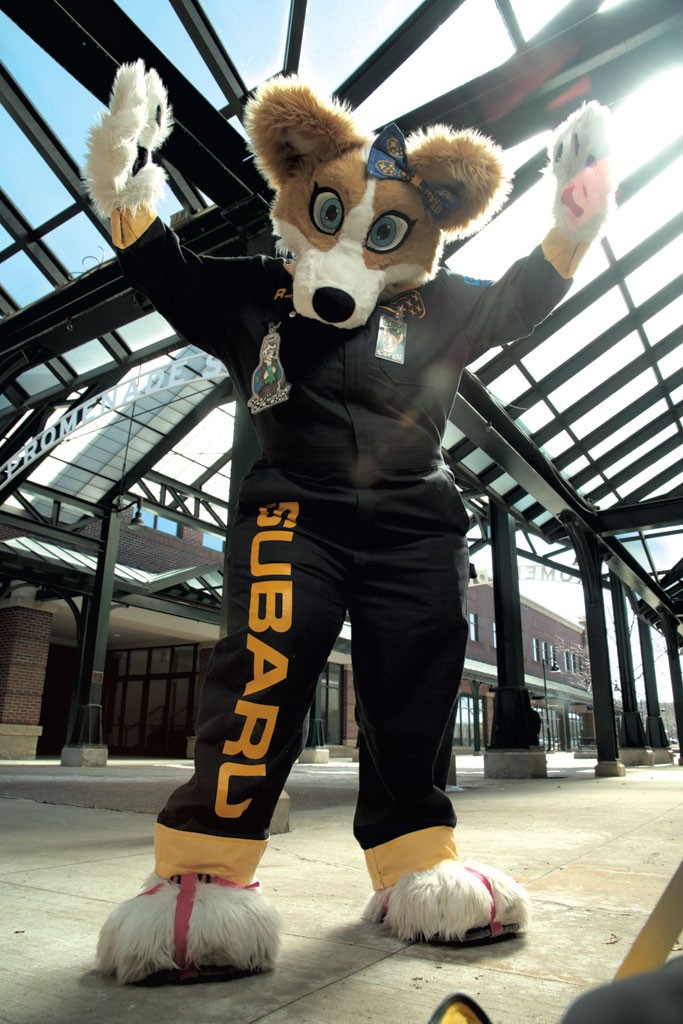 No, they don't actually believe they are animals. Yes, they do cultivate "fursonas." Owens explained that she chose a race-car-driving corgi named Rally as hers partly because she shares the breed's outgoing and assertive personality.

"I'm her codriver," her husband chimed in. The 36-year-old, who delivers appliances for a living, identifies as Ahzlon, a black panther with blue hair.

The trio belongs to the Vermont Furs club, which has been around since the early 2000s and has a membership that fluctuates between 20 and 40 people. The local furries get together at bowling alleys and pool halls — sometimes in suits, other times not — and look for opportunities to entertain at events such as charity walks and Christmas-tree lightings.

Not everyone has been so charmed. In fact, some city authorities seem a little freaked out.

Two months ago, Owens and 11 other furries joined the crowds at Burlington's annual Mardi Gras celebration. Decked out in green, gold and purple beads like the rest of the partygoers, the seven of them in costume high-fived little kids and posed with people in a photo booth on Church Street.

After about an hour and a half, a Church Street Marketplace rep confronted the group outside the mall and requested that they remove their animal heads, because they didn't have permission to perform on Church Street.

Why were they being singled out, the furries wanted to know, when the streets were teeming with other strangely dressed revelers?

"It's just different," was the response, Owens said. 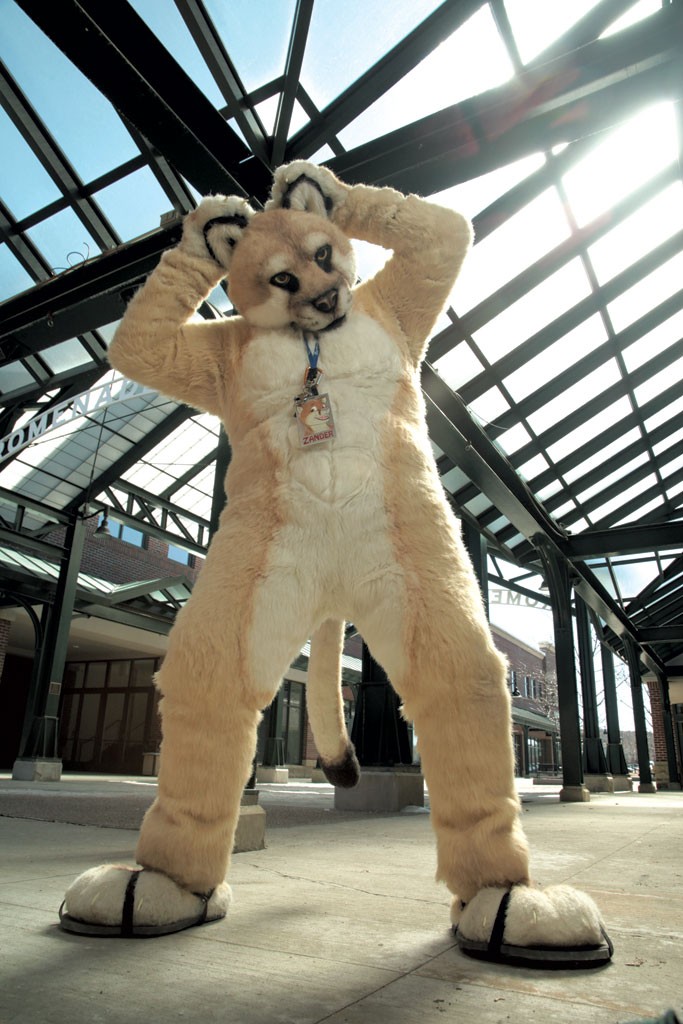 Offended, the group walked into an alley, where they removed their masks, or "broke the magic" as they describe it. Later, the Vermont Furs filed a formal complaint with the city, calling the incident an act of "blatant discrimination."

The Church Street Marketplace, which regulates the street, issues permits to people who want to busk on the brick promenade. To make the cut, street performers must audition in front of marketplace staff and pass a background check. Vermont Furs had a permit, but it expired at the end of last year. When Owens tried to renew it in January, she was told she couldn't yet because the permit system was getting revamped.

As bidden, the Vermont Furs had stayed off Church Street. They showed up at Mardi Gras because they didn't think they'd be breaking any rules.

Ron Redmond is the executive director of the marketplace. Asked about the incident, his response was simple: Google "Elmo" and "Times Square."

The first result was a New York Post story headlined "Elmo in Handcuffs After Times Square Bust." A woman wearing an Elmo suit had been arrested for aggressive panhandling. Elmo wasn't the only character to act out. In June, two different Spider-Man look-alikes were taken into custody on charges of groping and assaulting women. A Cookie Monster allegedly shoved a child and ... you get the idea.

Redmond's point: Fear of the big, fluffy creatures isn't totally irrational. He stressed that marketplace staff have a responsibility to the public to keep the pedestrian mall safe, which requires vetting all performers. "It's become a national issue where, in some cities, people dress up in these outfits and aren't necessarily doing it to connect with children," he explained. 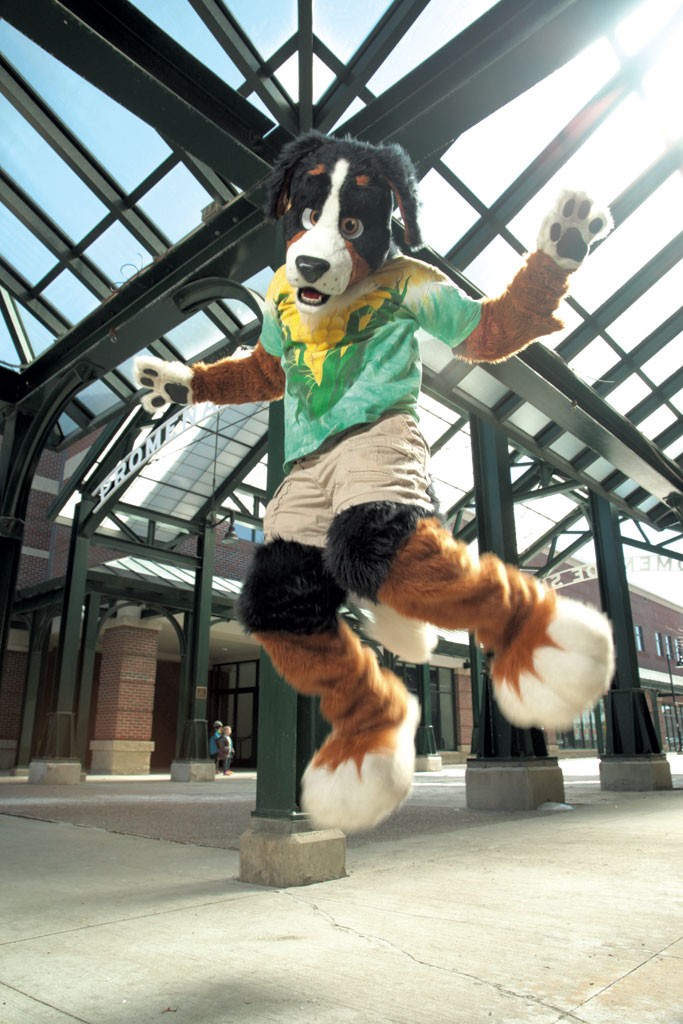 The Vermont Furs club is a different breed than the panhandling denizens of Times Square. The former belong to a tradition that dates back at least to the 1980s and grew out of science-fiction and anime fandoms. When out in public, they abide by certain rules. They're always accompanied by a non-costumed "handler," and they bend down rather than tower over small children so as not to intimidate them. Owens emphatically pointed out that they never accept cash.

"We're just like other fandoms except we're cuter, furrier and we do it for free," she said.

It hasn't helped the cause that several stories have linked furries to plushophilia — an attraction to stuffed animals — and other sexual fetishes. "It's a stigma we've dealt with for a very, very long time," Owens said. "As with any fandom, regardless if you're 'Star Trek' fans, My Little Pony fans, those romantic themes are out there." For Vermont Furs, and for the majority of furries, Owens continued, sex has nothing to do with it.

"We know they are really, genuinely good people," Redmond said of the Vermont Furs. Pointing out that the marketplace sometimes hires high school students to dress up as Frosty the Snowman or other characters, he stressed that they've got nothing against costumed creatures per se. Regarding the Mardi Gras situation, he admitted, "I'm not sure if that was the right move."

In Redmond's opinion, furries don't really fit the street-performer category, which puts them in a regulatory gray area. "It's an interesting and complex issue," he noted.

Even before the furry quandary, the marketplace had decided to revisit its street-performer system in response to complaints from "our more successful street performers," Redmond said. Under the current arrangement, he estimates that roughly 95 percent of people pass their auditions. As a result, an abundance of performers crowd the street, sometimes creating sonic overload. The likely solution: more rigorous auditions. 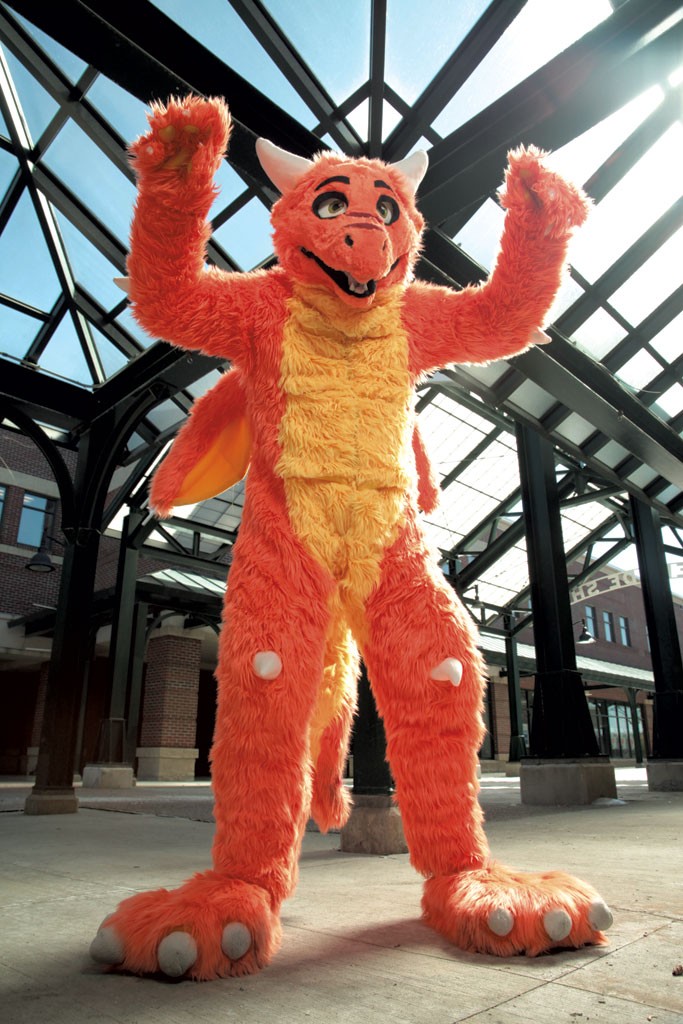 Church Street is the commercial lifeblood of Burlington, and its custodians are understandably concerned about preserving its charm. But some residents have criticized several recent policies — a smoking ban and a no-trespass ordinance allowing police officers to ban unruly people from the promenade — as overzealous attempts to sanitize the place. For some, raising the bar for street performers could carry the same whiff of elitism. How will those in charge address the concern? "It's a great question. I don't know the answer, but we've got to find the answer," Redmond said.

If there's a stricter audition process, will the furries — whose repertoire consists of high-fives rather than fancy tricks — make the cut?

Redmond said the marketplace is committed to carving out space for them; they just need some time to figure it out. One solution, he suggested, would be to give registered furries a badge or a pin with Church Street insignia showing that they've cleared the same background checks street performers undergo.

In the meantime, the Vermont Furs members are frustrated. Places like Essex Junction have welcomed them with open arms, but "at this point, the entire city of Burlington is off-limits to us." 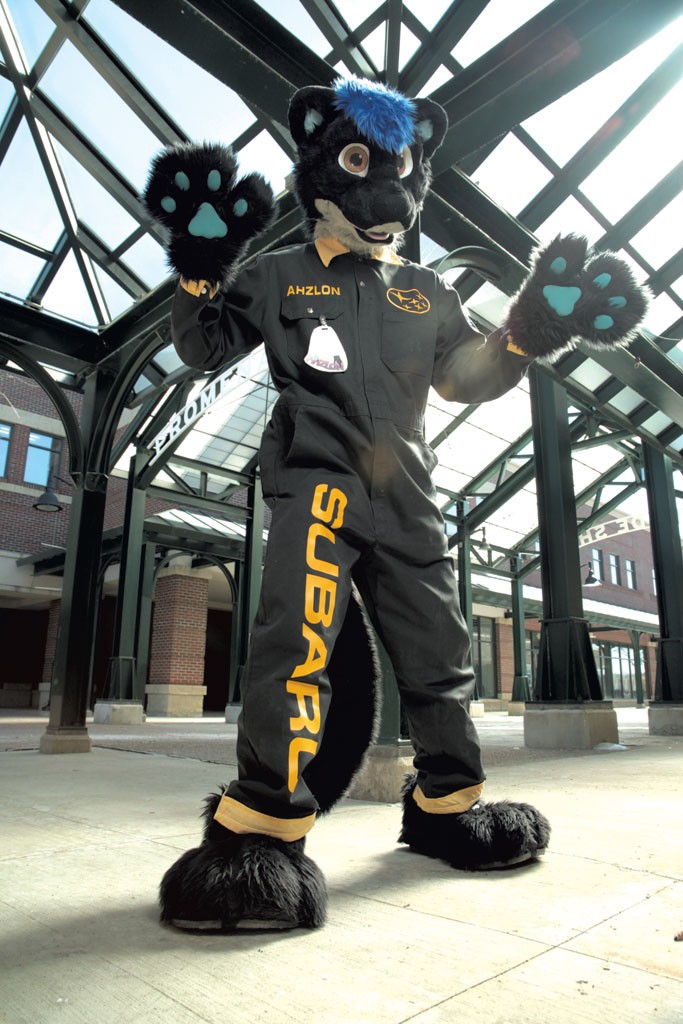 The problem is not just on Church Street. For years, furries did their thing in Burlington, undisturbed, amusing people at events such as the weekly farmers market in City Hall Park. But last summer, a police officer notified one of them that the city of Burlington's mask ordinance forbade that kind of attire. Perplexed, Owens went in person to the police department.

She found out Queen City regulations favor the underdressed over the overdressed. It's perfectly legal to parade around in the buff, but Burlington prohibits anyone over 21 from wearing a mask in public. The ban dates back to the days of the Ku Klux Klan, according to the Vermont Historical Society. In 1924, the hate group burned crosses on Lake Champlain's breakwater, and city officials passed the ordinance to prevent anything similar. The police department continues to enforce the ban, largely because people often wear masks when committing crimes.

"I'm, like, OK, well how does the didgeridoo guy with the cat mask get away with it?" Owens remembers asking a police officer, referring to a man she'd seen on Church Street.

The officer explained the street-performer permit system, and Owens later got one for the group.

Deputy police chief Bruce Bovat said he wasn't familiar with the incident — or the furries. He noted that officers only apply the ordinance within reason. But Bovat declined to weigh in on whether the ordinance should apply to furries — "I'm wary to put something out there that's so black-and-white." 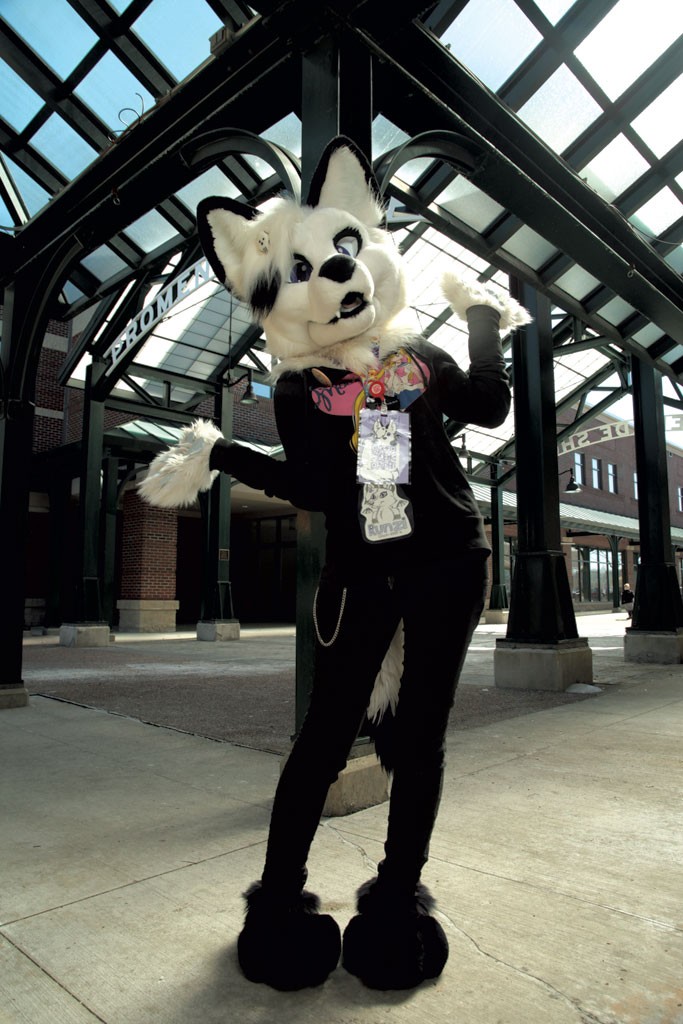 For the Owenses, being furry is a social thing. The couple has traveled to conventions, and they love being a part of the community.

Their friend, Rob, has never been to one. The 35-year-old auto parts salesman and backyard mechanic was quieter than his two companions. He's been a furry since age 15, but he didn't want to be identified because he's never told his family and doubts it would go over well.

Rob doesn't have a suit, but he's refurbished an old Ford Escort to resemble his fursona — a zebra with white stripes on black named Zytx. "I am terribly shy. Just coming down here tonight I got the shakes," he admitted, raising his hands to demonstrate. His fursona and his friends in Vermont Furs force him out of his shell.

The Owens talked about hosting a convention that even Rob would attend — one right here in Burlington. They already have a name: Green Mountain Fur Con.

But given the current situation, they know that for now, it's just a fantasy.