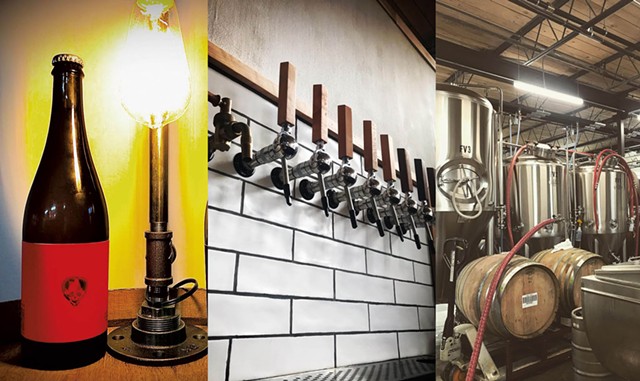 The couple started Freak Folk in 2018 in an extra room at Burlington's Queen City Brewery, where MacNamara was head brewer until September. She and Miller each have a decade of brewing experience.

They released Freak Folk's first mixed-culture, barrel-aged beers in August 2019 and quickly gained a following; the second release sold out in a single night.

"We've always wanted to have a brewpub-type of thing," Miller said. "But starting off with the mixed-culture stuff was a little more approachable for us. We're just very patient people."

That patience came in handy as MacNamara and Miller looked for Freak Folk's permanent home. Their initial application for the space in the Stowe Street building was denied by Waterbury's zoning administrator and Development Review Board. "We tried to appeal it," Miller explained. "Ultimately, we had to connect with the selectboard and the planning commission."

After months of meetings, Waterbury adopted interim bylaws that allow brewpubs in the downtown district, among other changes. The bylaws limit Freak Folk's production to 2,000 barrels per year, "which is plenty," Miller said. It's a significant increase from the 200 barrels the brewery averaged annually at Queen City.

Miller estimates that they'll produce 700 barrels this year with their seven-barrel brew system.

"We're big beer fans, and we love all kinds of styles," Miller said.