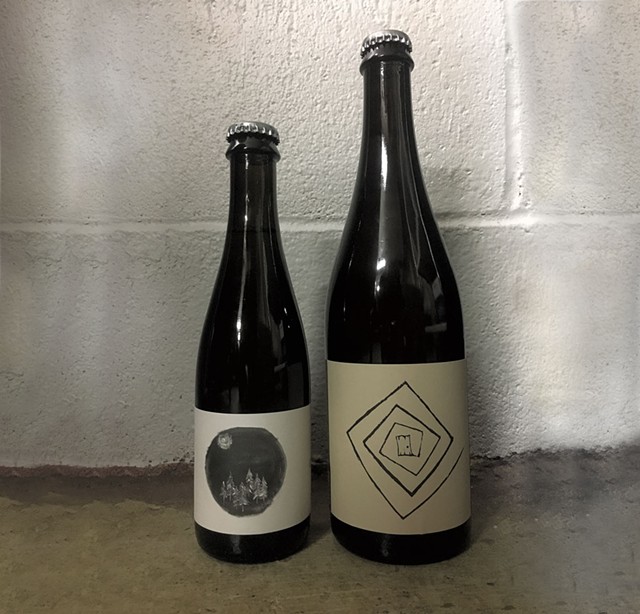 Two local brewers are teaming up to make beer that's brewed with wild yeasts and bacteria not found in more standard brews. The project, called Freak Folk Bier, will launch on August 9 with a bottle-release party at 703 Pine Street in Burlington, site of Queen City Brewery.

Lillian MacNamara, Queen City's head brewer, and Ryan Miller, head brewer at Aqua ViTea Kombucha in Middlebury, are the creative team behind Freak Folk. The brewing partners are also domestic partners who live together in Bristol.

Freak Folk Bier specializes in mixed-culture fermentation, a process that can produce different and unexpected flavors with each batch. "We have about five different mixes of yeast and bacteria that we're playing with now," MacNamara said. "They all kind of produce different flavors. We want to see the way they can play out differently."

Using Queen City equipment for brewing and wooden vessels for aging, Freak Folk has produced two beers that will be available at the launch: Lodestar and Cabin Bier.

Both are mixed-culture beers aged for eight or nine months. Lodestar, fermented in oak and aged in a red wine barrel, has notes of tangerine and lemon with a "funky mustiness," Miller said. Cabin Bier is named for the cabin in Ripton where Miller and MacNamara met. Aged in a Chardonnay barrel, it has bright flavors, Miller said, and is "citrus forward."

"We only release [beer] when it's tasting right," MacNamara said. "It's a waiting game, and it requires a lot of patience, but the end result is beautiful."

Freak Folk Bier will host periodic release parties when new beers are ready. The August 9 event, which starts at 6 p.m., will feature live music, Freak Folk bottles and Queen City on tap. Future release parties could include pairing beer with the screening of a "weird film."

"It will be different every time," MacNamara said. "We don't really strive for consistency. We want to keep it lively."

She added that Freak Folk has been a longtime dream. "We're super-excited. I'm so thankful to Paul for allowing us to use this space to make it happen," MacNamara said, referring to Queen City co-owner Paul Hale.

The original print version of this article was headlined "Freak Flag"