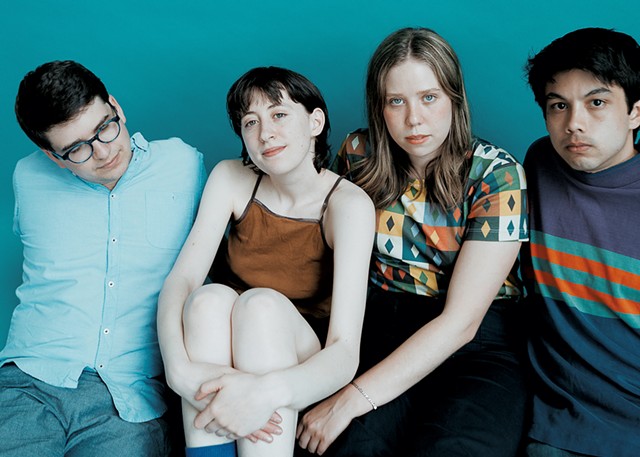 Frankie Cosmos is both the moniker of singer-songwriter Greta Kline and the name of her band. The New York City artist came of age in the metropolis' all-ages DIY music scene, one that's been largely erased from the Five Boroughs in recent years.

Before settling on the name Frankie Cosmos and starting the full band project, Kline, 25, was known for her extensive Bandcamp account. Starting in the late 2000s, she began uploading hundreds of songs under various aliases, such as Ingrid Superstar, Zebu Fur and the Ingrates. Often clocking in under 30 seconds, Kline's early tunes encapsulate the specificity of precise moments in time with an unfiltered, childlike quality.

Brevity is Kline's calling card. Her band's breezy tunes, like the ones on the recently released LP Close It Quietly, recall the carefree abandon of her early work. But they also exhibit sharpness and depth, honed by years of extensive output and nearly nonstop touring.

Seven Days caught up with Kline by phone.

SEVEN DAYS: You've played Burlington a bunch of times in the last few years. Have you had a chance to explore?

GRETA KLINE: I have, actually. Mostly years ago when I first toured up there. I remember going out and walking on the frozen lake.

SD: I read that you're pretty involved in planning your tour. What is it about Burlington that keeps bringing you back?

GK: It's a nice way to start off our East Coast tours, because it's pretty close [to New York City]. We always have a really nice time. We have really nice friends there and artists that we love — Paddy Reagan, who helps with all of our shows and has played a handful of them. And I always associate Burlington with James Kochalka, who's a huge inspiration.

SD: Your songs all hover around the two-minute mark. How do you consistently express your thoughts, ideas and emotions in such small packages?

GK: I ... don't know. I think sometimes when I'm going through something hard, it feels like I can't be concise at all. And I have a really hard time describing my feelings. Sometimes I end up with really huge chunks of writing, and they're usually all over the place. I think that the more you write, it doesn't really point to anything, because it's too much. It's definitely a process to get it there. Personally, I have a short attention span, and I think a lot of my peers do, too. It works to have short songs and be easier to digest in that way. And easier for me to make it and move on.

SD: Given how prolific you are, do you ever find yourself accidentally plagiarizing your own work?

GK: Never accidentally. If a melody comes to my mind and I feel like I know it, I can usually dig up whatever song I wrote that I didn't finish — or that I did finish but still [wants] to be worked on. Maybe I have without knowing, but I usually know when I'm going back to an old idea and reworking it or putting it in a new context. I think it's really fun to do that.

Sometimes I get a song stuck in my head that I wrote, and I realize that it's good because it's stuck in my head and it's been years. I only know that it wants to be worked on if it gets stuck in my head of its own accord. I'm sort of collaborating with my memories. There's a song called "Even Though I Knew" on [Close It Quietly]. It's a relatively new song, but it has lyrics in it [I wrote] when I was 17 that were in a really old notebook.

SD: When you first started releasing music, you did so under various aliases. What can Frankie Cosmos do that, say, Ingrid Superstar couldn't do?

GK: Frankie Cosmos is the only one that has been used for the name of a band. All of the other ones were just me. The Ingrid Superstar recordings have a special quality to them, and they feel, like, very personal. But at that time, I never made music that sounded as full or collaborative or as much of a rock band. Frankie Cosmos is what I wanted to have.

SD: What's something that a thriving DIY scene needs?

GK: The main thing it needs is people who care. That will just make everything come together. If there are people who care about making a scene happen — even if you're in a town that has no venue for you to play, there's always somebody who'll say, "Let's just do it at my house."

SD: What's something that typically exists in a DIY scene that we could do without?

GK: I don't know how to put this. I wanna say creepiness.

GK: For me, when I was a teenager, it felt really great to be a part of a really age-diverse scene. I had friends that were 10 years older than me. It didn't make me feel like I was a little kid. That can be really cool. But there's definitely a fine line of how to have appropriate friendships with people that you're not peers with, or that you're peers with but aren't the same age. That's something that's pretty pervasive in DIY.

I don't know how to say this without sounding really obnoxious. To some extent, there's a thing about DIY that's frozen in time. There's no such thing as succeeding and failing. Everyone's on the same level, so there's a stuntedness about it. Especially the adults in DIY, who can be weird and creepy. I know that sounds really mean, and I'm not trying to call anyone out.

SD: Don't worry. This is not my first time hearing this.

GK: Now I have to check myself in these situations. I'm 25, and when I'm befriending some 18-year-old at my shows, I'm always like, How do I do this in a way that's not inappropriate and not be freaky? It's hard for me to see myself as an adult, so I'm sure it was hard for adults around me to see themselves as adults when I was a kid. This is all said with as much empathy as I can muster.

SD: What piece of art has been blowing your mind recently? It could be a book, painting, film, etc.

GK: That really blew my mind. I like to have TV on in the background while I'm doing other stuff. It was the first time that I thought, Oh, this is a piece of art, and I have to give it my full attention. It really does feel like an art piece in terms of the storytelling and the images. I'm also really inspired by the makeup. I don't wear makeup, and I was like, "Should I start wearing makeup? This looks really fun."