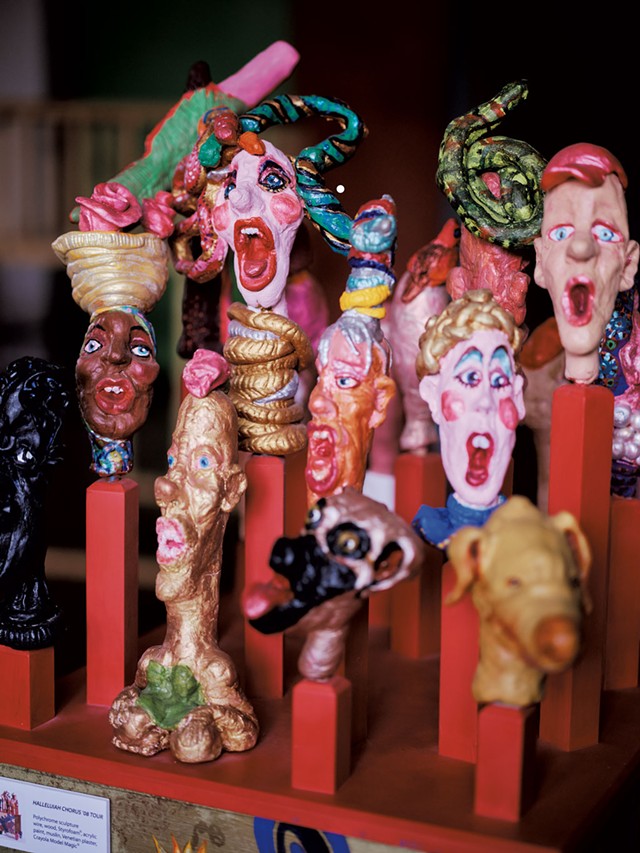 Exaggerated and full of life, the twisted faces in Fran Bull's sculpture "The Halleluiah Chorus" silently shriek, exalt and exclaim. Adorned with baubles, hats, ruffled collars and animals such as macaws and banded snakes, the motley crew of clay heads is awash in every conceivable color. They look like they're having fun.

"It's the idea that we're all here with the animals, the reptiles — we're here with everybody," the artist said.

Under the joint name FROBERTAN, Bull and her architect partner, Robert Black, present "The Halleluiah Chorus" and many other sculptures as part of a new exhibition called "We're All at a Party Called Life on Earth!" Showing at Compass Music and Arts Center in Brandon, it's a kaleidoscopic spectacle of humanoid beings and other brightly appointed objects gathered in celebratory splendor. The work aims to spark conversation about togetherness, unity and humanity finding its way back to jubilation after pandemic isolation.

"We're all united by being here on the planet." Fran Bull tweet this

Bull has exhibited internationally for decades, as well as in Vermont. Black, her longtime collaborator, similarly has decades of experience in architectural design and education.

Bull said she couldn't quite remember how she initially conceived of the show. But it began to materialize while she was working on "some very dark stuff" in the 2010s.

"I said to myself, 'I'm really down. I'm gonna cheer myself up,'" she recalled.

Bull imbues her figures with the bustling energy and panache of carnivals and the theater. That's something she and Black say humanity desperately needs in 2022. Referring to COVID-19, Black said, "This thing that spread throughout the world that caused everybody to stay apart from each other is actually ... the very thing that is uniting us" through a shared experience.

Black's contributions to the exhibit, if less flashy than Bull's Technicolor wonderland, are essential to its structure and presentation. The first of Black's creations is a wooden archway emblazoned with the show's title. Constructed with Black's furniture-maker son, Aaron, it welcomes visitors as they enter the gallery. The archway's blocks of colors match a series of large background panels that encircle the show in a tentlike fashion.

Black's structures are lightweight and easily disassembled, which aided in transport from the show's February debut at the Sandy Hill Arts Center in Hudson Falls, N.Y. "The Halleluiah Chorus" is affixed to a rolling cart that sits atop a slatted platform. The base is meant to simulate boardwalks of the Jersey Shore, where Bull grew up marveling at its colorful characters.

Other wooden structures include large tables and chairs, pedestals and a huge crib for the grotesque baby clown in "A Fool Is Born." Clowning appears repeatedly throughout the show, such as several oversize jester's scepters that Bull created.

Another of Black's foundations sits under "For David Bowie," an homage to the legendary rock star who, in his 1980 music video for the song "Ashes to Ashes" and others, dresses as Pierrot.

Though not meant to be a literal representation of Bowie, Bull's "For David Bowie" recalls the alien energy and opulent attire the Starman wore. It's chromatically on point in a vibrant greenish blue, just like his costume in the music video.

Beyond that, Bull explained a deeper meaning in the eye-catching, 7-foot-tall sculpture.

"He thought of himself, in that guise, as [the] everyman," she said of Bowie. "So, in a way, it can encapsulate the idea of the show, which is that we're all [the] everyman in that sense. We're all united by being here on the planet."

After the show opens, Bull and Black will hold a series of associated talks and workshops. Bull's talk on Friday, May 13, centers on decoding works of art by unpacking their various elements. On Friday, June 3, Black discusses whether human beings can find common ground while creatively expressing difference. A hands-on workshop follows each talk the next day.

Compass board member and secretary Edna Sutton, who conceived of the show's tentlike enclosure, acknowledged that FROBERTAN's exhibition might surprise local audiences.

"We're a bit monochromatic," she said, noting that a lot of Vermont art, while pleasant to look at, can be a bit safe. "And ['We're All at a Party Called Life on Earth!'] isn't. This is bold. It's kind of in-your-face — and I love it."

No piece in the show better represents unity than "Inspired Conversation." In it, two Seussian figures beam at each other across a table scattered with random objects, including a Model Magic hot dog and coffee cups and dinosaur figurines. Adorned with flowers, the characters sit with open palms, a universal signal for truth and openness.

Welcome to the party, they seem to say.

The original print version of this article was headlined "Party People"