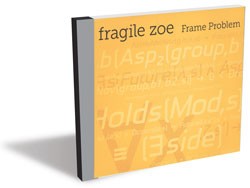 Fragile Zoe is a local jazz-funk supergroup. The quintet features a handful of the area’s most highly regarded players, including Alec and Patricia Julien, Tom Cleary, Joe Englert and Caleb Bronz. While the band’s star power is impressive, their debut album, Frame Problem, doesn’t quite equal the sum of its high-wattage parts.

“Big Sig” is first and reveals the album’s primary flaw: painful overproduction. Alec Julien’s funkdafied composition is certainly engaging and inventive. And the band members’ individual performances are universally top notch — Cleary’s keyboard work is exemplary. But the song, as much of the album, boasts a high-gloss finish that robs it of any grit or gravitas.

Sadly, this issue plagues most of the recording. Even more muscular moments, such as the rumbling opening riff of “100 Marbles,” feel comparatively neutered. As such, when Alec Julien steps forward with what desperately wants to be a monster guitar solo following a nice back and forth with Patricia Julien’s airy flute, the result is borderline schmaltz. A player of his elite caliber deserves better.

The loping “Interference Rules” continues down a similar path, but does feature more fine interplay between the Juliens, a hallmark of the project, generally.

The title track is a standout and hints at what the band is really capable of. That pesky slickness remains, but is almost overcome by the group’s collective intensity. In particular, bassist Joe Englert unleashes raw fury beneath the undulating groove set forth by Cleary and Alec Julien.

Depending on your point of view, “The News Breaks” is either a soothing down-tempo number or something perilously close to elevator music. Which stance you take likely depends on your feelings about the flute as a jazz instrument. Patricia Julien’s performance is technically immaculate. But those seeking Herbie Mann might want to look elsewhere. Like the following track, “Pirate Fish,” perhaps. The tune quickly rescues the listener from the preceding Muzak malaise.

“Ice Weasels” is similarly rollicking and, much like the title track, suggests that Fragile Zoe might not be so delicate after all. Alec Julien’s spasmodic composition is a perfect template for Cleary’s wandering keystrokes and Patricia Julien’s fiery flights of flute fancy.

The moody “Waiting for Pie” closes the record on a high note. While it is still a touch too clean for this reviewer’s tastes, the song’s subversive groove is chilling. What’s more, Alec Julien’s guitar finally delivers a robust, organic tone to match his ace chops.

Despite a somewhat frustrating first attempt, Fragile Zoe is simply too talented, collectively, for Frame Problem to be the truest representation of their abilities. For that, you likely need to see them in person, where excess studio sheen is not an issue. Conveniently enough, you can catch the band’s CD release party at Club Metronome this Thursday, with Mandarax.