Fracas in Arizona Prison Leads to Lockdown for Vermont Inmates 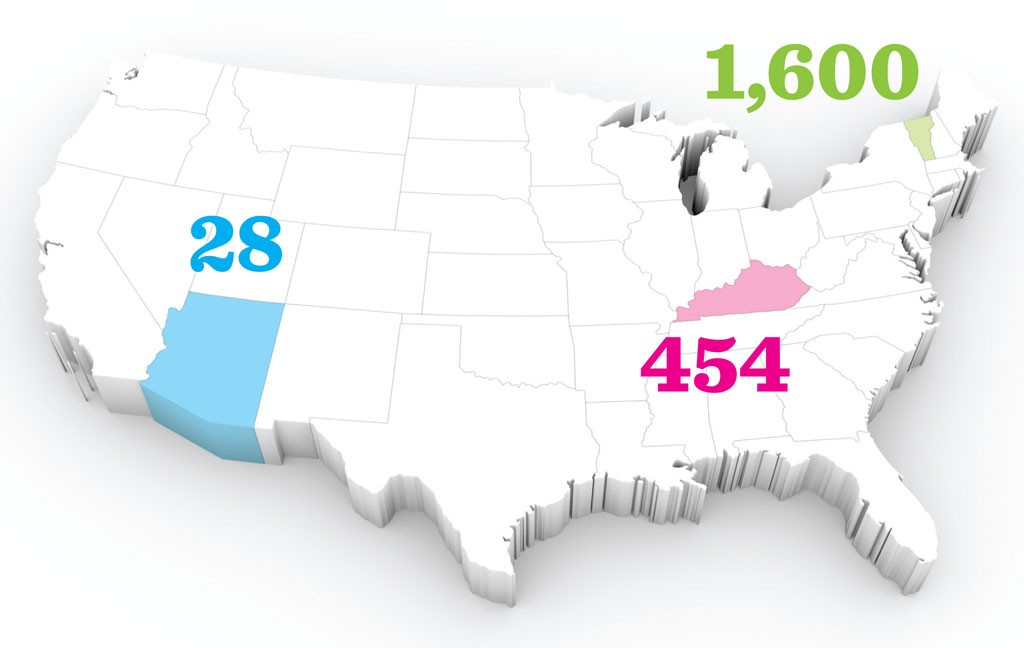 Thirteen Vermont inmates have been in solitary confinement for a month in an Arizona prison after guards used a "chemical agent" to quell their 30-minute rampage, Vermont Department of Corrections officials confirmed to Seven Days last week.

The group refused to enter their cells when ordered and began smashing televisions, microwaves and other equipment, according to officials. They were frustrated by restrictive rules on their movements inside Arizona's Florence Correctional Center, the DOC said. They were also reportedly upset about being sent out of Vermont, beyond the reach of family and friends. Vermont currently outsources 482 inmates to the Corrections Corporation of America because there aren't enough prison beds to house them in state.

Though no one was seriously injured in the August 22 incident, it could renew long-standing concerns about Vermont relying on CCA — a company that has been subject to lawsuits alleging poor supervision and inmate care — and sending inmates thousands of miles from the people who would conceivably support them when they are released back into the general population.

Seth Lipschutz, supervising attorney from the Vermont Prisoners' Rights Office, said he had gotten little information about what DOC is calling a "disturbance" — not a "riot." His agency is considering sending investigators to Arizona in response.

Coincidentally, a group of advocates who have long been critical of Vermont's reliance on distant private prisons has been preparing to roll out a public-relations campaign in the coming weeks. They're urging lawmakers to reduce the state's prison population, which would eliminate the need to send inmates out of Vermont.

Suzi Wizowaty, who runs Vermonters for Criminal Justice Reform, said the previously unreported Arizona incident heightens her group's concern that the DOC is unable to supervise its inmates when it turns them over to CCA. Wizowaty is a retiring Democratic state representative from Burlington.

"If this had happened in Vermont, we would have heard about it," Wizowaty said. "We have concerns about private prisons and people being sent away. It makes it harder for the state to provide the oversight you would want and expect. This is something the state imposes on people, and therefore the state has an obligation to supervise it. That's hard to do when it's a private prison, especially if it's so far away."

In a written statement, CCA confirmed the incident and the inmates' subsequent punishment, but did not provide additional details. "CCA correctional officers receive hundreds of hours of initial training, and undergo intensive annual instruction, which includes best practices in diffusing conflict among inmates and the rapid, safe and humane resolution of inmate disturbances," wrote Jonathan Burns, senior manager of public affairs.

It has been nearly two decades since the Vermont DOC had room for all inmates that judges send into its custody.

Currently, the state has 2,100 inmates who are either awaiting trial or are serving their sentences, but only 1,600 prison beds in the DOC's seven facilities.

Vermont is in the final year of a two-year, $34 million contract with CCA to handle the overflow. Roughly 454 Vermonters are housed in CCA's Lee Adjustment Center in Beattyville, Ky. Inmates who have committed serious disciplinary infractions at Lee or any of the Vermont facilities are sent to Florence, which has a higher level of security and restricts inmates more than the other prisons.

The 28 Vermont inmates in Florence live together in a small wing of the prison, which also houses inmates for the state of California and the U.S. Marshals Service.

Both California and the Marshals Service require that CCA keep their inmates separate from others, isolating the Vermonters, according to Richard Byrne, the DOC's out-of-state unit supervisor. That means few inmates have kitchen or outdoor jobs that allow the kind of movement prisoners in Vermont or Kentucky enjoy, Byrne said.

He went on: Shortly before noon on August 22, the inmates staged a coordinated resistance and refused to reenter their cells when ordered as part of their routine. Byrne declined to give further details of the incident or describe what "chemical agent" guards used to end the fracas.

A CCA investigation revealed that just under half of the Vermonters there participated in the incident. As punishment, 13 were placed in what prison officials call "segregation," confined to individual cells for 23 hours a day.

Byrne said it is unclear how long the punishment will last — CCA, not Vermont DOC, is in charge. The latter uses segregation as a disciplinary technique only if inmates are considered a danger to their fellow prisoners, Byrne said.

In response to the incident, the DOC flew a team of investigators to Arizona on September 10, inspected the prison and talked to some of the inmates over a two-day period. They found no problems with the facility and took no action, Byrne said.

"We knew that population would have limited movement, given the reasons they are out there. We went to make sure it's running effectively and the population is being treated fairly," Byrne said. "[Investigators] reported back that there is limited movement, but [no] glaring issue. It's very well-run."

Still, both DOC officials and the agency's critics say that shipping inmates far from Vermont causes hardship on both the inmates and their families.

When Bernard Carter was sentenced for an aggravated sexual assault 20 years ago, the Newport resident went to prison in Virginia, where Vermont formerly had a prison contract, and then to Lee Adjustment Center. He spent most of the last 16 years there.

His 81-year-old mother, Ruth Carter, says she and her husband could only afford to see him once a year, spending an annual $1,000 to fly to Kentucky for three days. They stayed from 8 a.m. to 3 p.m. inside a supervised prison recreation room talking to their son and occasionally buying him a soda or snack from a vending machine.

Carter says she would have visited her son every weekend if he had been incarcerated in Vermont.

"They need to bring them back because a lot of them have no one," Ruth Carter said. "The families of most prisoners are poor. Most of them can't afford to travel way out there. So who is suffering? The parents, the wives, the children — it's just not right."

A few weeks ago, just after the disturbance, Bernard Carter was transferred from Kentucky to Arizona. His mother says she and her husband cannot afford to travel to Arizona and will have to wait until his release, scheduled for 2016, to see their son again.

"They need their families," she said of the inmates. "Families need them. It's the only way."

DOC says it would prefer to not have to rely on CCA, but that it is a relationship of necessity.

While Vermont's crime rate has fallen in the past decade, the inmate population hasn't declined because of a dramatic spike in the late 1990s. Vermont currently has double the number of inmates it had in 1995, owing mostly to tough-on-crime sentencing laws.

Based in Nashville, Tenn., CCA has 90,000 prison beds in 53 prisons, representing 95 percent of the country's private prison market. That capacity allows it to offer customers — states such as Vermont — the best prisoner price, and it has enough room to keep all the Vermont inmates together, a key point for the DOC.

Two years ago the DOC did not approve a bid from Maine, which would have placed Vermont inmates throughout that state's sprawling prison network. It also was more expensive than CCA's offer of roughly $67 per inmate per day.

"They are not without their blemishes, but they've proven to be consistent, in terms of our relationship, and because they're so big, they're always cost competitive," Andrew Pallito, commissioner of the Vermont Department of Corrections, said of CCA.

In 2004, inmates rioted inside Lee Adjustment Center after allegations of guard abuse, and lawsuits have been filed across the country concerning lax supervision, including a notable one in 2011: Idaho inmates claimed correctional officers encouraged brawls among inmates and denied them medical care in a game they dubbed "Gladiator School."

In January, the warden at Lee Adjustment Center resigned after incidents of violence put 200 Vermont inmates on a three-week lockdown. The state of Kentucky has stopped sending inmates to Lee altogether — in part because correctional reforms have reduced its overall inmate population.

Pallito acknowledged that his agency can do little to supervise the Kentucky and Arizona prisons, and that the follow-up inspections may not give DOC investigators an accurate picture of the daily lives of inmates.

"Anybody we deal with is going to know we're coming," Pallito said. "It's hard to just show up. I want to get to a point where out-of-state isn't an issue."

While awaiting specific proposals, Pallito said, he tentatively supports the goals of Wizowaty's group, which will urge lawmakers to expand options such as pretrial home detention, community service in lieu of jail for minor offenses and treatment programs for nonviolent drug addicts.

Pallito also said he hopes to expand transitional housing programs for inmates in the coming years. At any time, the DOC has a handful of inmates who have passed their minimum sentence date but are kept behind bars because there is no supervised home in which they can start serving probation.

Just last week, the DOC received a $1 million federal grant to try to reduce recidivism. Pallito said the money will fund increased counseling and other services for higher-risk inmates who have served their time but are deemed likely to reoffend.

Ultimately, Wizowaty said, her group wants to see Vermont cut its inmate population by 500 prisoners, eliminating the need for CCA within three years.

It may be too ambitious.

"There isn't anything on the table right now that would put us there that quickly," Pallito said. "We're talking about reducing incarceration — that's going to come with significant pushback."

Later this month, DOC is scheduled to review proposals for a new contract to house Vermont's excess inmates. CCA is expected to be among the bidders.