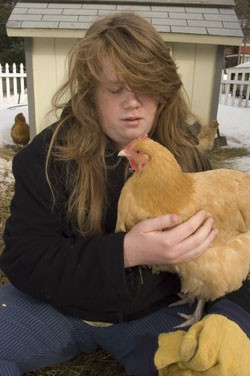 Burlington high schooler Zev Chasan used to know two ladies who lived down the hill. Then he took them home and got lucky.

The females in question were chickens from Lucky Ladies Organic Egg Farm, a home for "happy hens" at the Burlington Intervale. At the time, the sophomore was just getting into poultry. Two years later, he's the proud foreman of a side-yard coop on North Prospect Street. And his chicken population has expanded to eight.

"It's grown to be, like, a fad all of a sudden," says his mother Kathy on a recent afternoon. "I think it's growing, because I keep hearing of other people who have chickens."

Indeed, despite its status as Vermont's largest metropolis, Burlington appears to have hens aplenty. Zev Chasan is just one of several Queen City chicken owners; anecdotal testimony suggests the number of local cluckers may be increasing.

At 4 p.m. on a recent Wednesday, a reporter watches Kathy and Zev feed their chickens an afternoon snack. Across the street, crows squawk from atop a cluster of telephone poles while cars cruise northward toward Riverside Avenue. As the teenager feeds his flock grain from a plastic bag, Kathy collects eggs from a grey-roofed coop. She'll use some for baking; others may be given to appreciative neighbors.

With his purple sandals and bird-patterned pajamas, shaggy-haired Zev could just as easily be gearing up for a Nintendo session. But, as his mom explains, he's a chicken connoisseur. In the summer before ninth grade, Zev got into fowl while working at the Intervale Center's Healthy City program. The following year, a chicken-raising friend from Latin class egged him on. Once Zev started working part-time at Lucky Ladies, it was only a matter of time before he petitioned for layers of his own.

"I told him he had to write a persuasive letter to convince me," recalls Kathy, standing on a clump of hay.

"And I didn't," Zev reveals, crouching down to greet a Rhode Island Red.

"Instead, he nagged, so I gave up," his mother continues.

The first two birds in this flock were a "present" for working at Lucky Ladies, Zev recalls. As for a pair of golden Buff Orpingtons, "Mom saw an ad for them on Front Porch Forum," he explains. "So we just drove down and picked them up."

"They're from the South End," Kathy adds with a smile.

If the Chasan situation sounds too good to be lawful, it just might be. Article 13 of the newly enacted Burlington Zoning Ordinance allows residents to keep four or fewer "domestic animals" — that is, "mammals, reptiles, birds, livestock and domestic pets" — for "personal enjoyment." So, in theory, households that keep more than four do so in violation of city law.

But not so fast. Unlike "domestic animals," "domestic pets" — a catch-all term encompassing "canine," "feline" and other animals "bred or raised to live in or about the habitation of humans" and to be "dependent on people for food or shelter" — are regulated by the Secretary of the Agency of Agriculture, Food & Markets, not the City of Burlington. According to Kathy Chasan, such legalese is gloriously unclear. "You can have as many pets as you want," she contends. "And these are our pets . . . so we're legal! Some people even have roosters, which aren't allowed. But if they're pet roosters, you're OK."

"Which is weird," Zev declares.

Kathy, who just got elected to the school board, says she found out about the pet loophole "through the man running my opponent's campaign."

Ken Lerner has been working at Burlington's Department of Planning and Zoning since the late 1980s. He remembers hearing "three or four" chicken-related zoning complaints over his two-decade tenure — a figure, he insists, that falls on the "conservative high side" of the spectrum. Faced with Kathy Chasan's "loophole" claim, he declares, "A chicken is not considered a pet."

After skimming through a few reams of legal code, however, Lerner wavers. "I don't think a chicken is a pet, but there could be a loophole," he admits, adding that he would need to check with Jodi Harvey, the Burlington Police Department's animal-control officer, before giving a definitive answer on the fowl-zoning question. For now, he notes of Chasan's assertion, "She might be right."

Whatever the zoning ordinance stipulates, chickens are here to stay. Just ask Pitkin Street resident Rachel Siegel. Her children Ira and Gertrude, ages 1 and 4, respectively, help care for their family's five hens. Siegel had to seek approval for exceeding the alleged "domestic animal" limit — which was just three until December 17, 2007 — after getting busted for an improperly placed coop. She reports knowledge of about 10 other hen-raising households. Five years ago, she only knew of one.

But despite her enthusiasm for urban husbandry, Siegel has a bone to pick with city officials. A neighbor's Husky recently killed one of her chickens — a repeat offense. BPD's Harvey offered to serve her neighbor a ticket for the infraction, Siegel recalls. But this Old Northender declined, claiming it wasn't a "neighborly" solution. "I feel frustrated that there's no option other than a financial obligation for the dog owner," she asserts. The city isn't holding the other party responsible, she claims, for "making sure it doesn't happen again."

Last week, Seven Days left a message for Harvey, who is also president of the Vermont Animal Control Association, regarding the city's response-to-chicken-murder modus operandi. She did not respond as of press time.

If Burlington's regulatory climate seems fairly flexible, Montpelier law is a municipal Gumby. Chapter 8 of the capital city's Code of Ordinances prohibits "domestic fowl, goat, sheep, swine, horse or cattle" from roaming "at large, loose or unrestricted" within city limits, but that's about it. Translation? You can keep as many barnyard animals as you like, provided they're properly fenced in. "There's nothing I can see as far as numbers," says Montpelier Planning and Zoning Assistant Audra Brown. "The entire chapter on animals and fowl, not including dogs, is two pages."

Brown, who lives three miles from downtown, speaks from both administrative and personal experience. Beginning last Easter, her boys Daniel, 7, and William, 9, began nursing baby chicks in her living room. Once the birds matured, Brown started selling their eggs for $3 per dozen at her office. "It was a pretty old-fashioned experience, if you will," she recalls. "The kids would come home and gather eggs, I would sell them, and we collected the money in a Mason jar."

But rustic authenticity comes at a price. Burlington's urban environs presumably deter most traditional predators, such as foxes and weasels. Montpelier, however, is situated beside woodland and riparian habitats, so its chickens live more elemental existences. Just this winter, in fact, Brown's entire 10-hen flock was "devastated."

The birds weren't totally innocent. "They did fly over the fence, and they kept getting more and more bold, digging up our neighbors' flower garden," Brown concedes. "We had to clip some feathers to deter their flight."

By contrast, the Chasan chickens in Burlington choose not to escape from their insubstantial enclosure. Why? Maybe it's their impressive diet. After collecting today's eggs in a wicker basket, Kathy explains that her hens don't just contribute to highbrow items such as Passover macaroons and quiche — they eat them. In addition to organic feed, they chow down on bread from Panadero, a bakery on North Winooski Avenue, as well as seasonal fruit and vegetables.

"Wanda likes tomatoes most," Zev reports, referring to a Delaware chicken he purchased at the Vermont State Fair.

"Yeah," Kathy agrees. "If I give her cranberries, she's disappointed."

The Chasan chickens may be picky, but at least they know how to play nice. Kathy observes that they share spare seeds with little birds and entertain children who live on the block. Just a few weeks ago they greeted a delegation of students from Lawrence Barnes Elementary School, whose after-school Ecology Club was taking a citywide coop tour.

Perhaps more importantly, the fowl can shine up in a pinch. Some time ago, Zev's flock was featured in a commercial for an answering service filmed by Colchester-based Mt. Mansfield Media. "I don't know how these guys heard of us," his mother says. "They made the coop look like an office. On a bale was a sign saying, 'Stop: Don't put all your eggs in one basket!'" And 'Don't count your eggs before they hatch!'"

"It's very short and very funny," Kathy says. "The only troubling thing is, a man wearing a chicken suit — with a business suit over it — gets run over by a truck. A sign says, 'Why did the chicken cross the road? Because he didn't get his messages.'"

"Then it shows him in the hospital," says Zev.