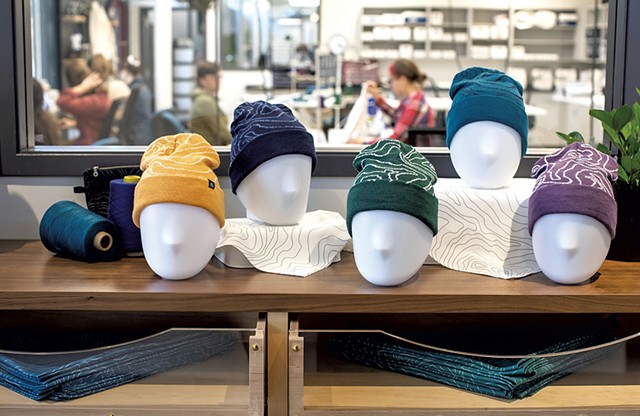 At first glance, the squiggles printed on bolts of blue, green, yellow and black fabric look like abstract patterns. But if you're a frequent hiker of Vermont's tallest peaks, you might recognize that the wavy white lines mimic the topographic maps of Camel's Hump, Mount Mansfield and Mount Ellen.

These newly printed cotton-twill fabrics are being turned into bandanas and hair scrunchies at Fourbital Factory, a new, state-of-the-art apparel manufacturing plant in Burlington's South End. The 12,000-square-foot facility, which shares a building with Lake Champlain Chocolates, opened in May and has already hired about 30 employees, with more positions to fill.

"There is a desire to bring [the industry] back. But you can't bring it back if you don't know how to do it." Carey Strobeck tweet this

These items in the 4T2D Fundamentals line, which are relatively simple to produce, serve as training tools for new employees, many of whom had no prior experience in commercial sewing. As staff become more experienced, they'll move on to making more complex garments, such as T-shirts, vests, coats and sweatshirts.

"It takes about 2,000 hours for someone to go from knowing nothing about sewing to being an accomplished sewist," Strobeck explained. "There's still a lot of learning to happen."

To get there, Strobeck and her management team have created an in-house education program — essentially, classrooms within the factory itself — to build a workforce of skilled garment workers, for Fourbital and other local companies. In addition to manufacturing its own products, Fourbital is producing items contracted by other local apparel brands. And they're doing it sustainably, using fabrics that, whenever possible, are sourced domestically and made from natural and repurposed fibers. Ultimately, Strobeck hopes consumers will be willing to pay slightly more for higher-quality, longer-lasting garments manufactured locally and responsibly.

In a sense, Fourbital is trying to resurrect a piece of Vermont's past. As recently as the 1940s, Vermont was a textile hub, manufacturing fabrics for the U.S. garment industry. For years, the woolen mills in Winooski were the state's largest employers. At the height of production during World War II, they employed more than 3,000 workers who ran looms around the clock, producing military uniforms and other fabrics for the Allied war effort.

But after the mills shut down in the 1950s, Vermont's textile industry all but vanished. A handful of Vermont companies, such as Northfield's Darn Tough Vermont, which makes and sells socks, still produce apparel in the state. But more than 97 percent of all garments and shoes sold in the U.S. are made overseas, predominantly in Asia, according to the American Apparel & Footwear Association. In offshore factories, especially those in developing countries, production costs are significantly lower, and environmental and labor protections substantially weaker. 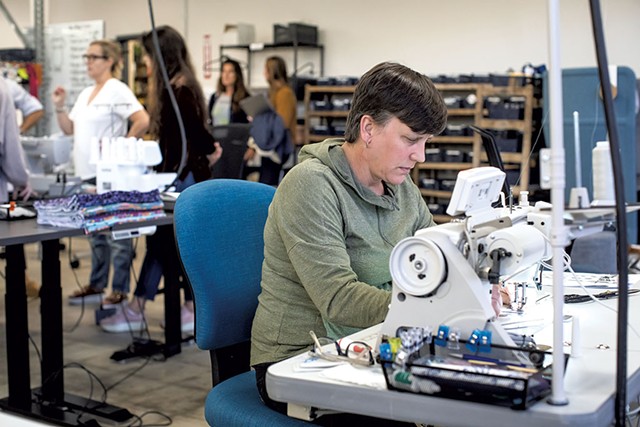 Fourbital is part of a nationwide effort to reverse that decades-long trend and bring apparel manufacturing back to the U.S. With a management team that includes five people with backgrounds in teaching — Strobeck has a master's degree in education — the company teaches a program called Fundamentals of Industrial Sewing & Production. Developed by the Industrial Sewing and Innovation Center in Detroit and taught at other companies in such cities as Seattle, Baltimore, Nashville and Indianapolis, FISP will benefit not just Fourbital but other Vermont apparel brands and technical schools.

"I have grandmothers that worked in the fashion industry," Strobeck said. "There is a desire to bring [the industry] back. But you can't bring it back if you don't know how to do it."

One of the first things a visitor notices upon entering Fourbital is that it's not what people might envision as a typical clothing factory. Unlike the industrial sweatshops found overseas, Fourbital is modern, bright and airy. The production floor hums with activity, but it's not noisy. The room is clean, with ample windows that provide natural light.

Some of those windows offer a view from the factory floor into the company's soon-to-open retail shop at the front of the building. Strobeck said those windows will also allow consumers to see the people they're supporting when they purchase products made at Fourbital.

As Strobeck explained, Fourbital is competing against "fast fashion," an industry term that refers to apparel that's inexpensive, rapidly produced, low quality and meant to be discarded quickly. Fast-fashion clothes are often made from fossil-fuel derived synthetic materials and manufactured in facilities that exploit workers and lack strong environmental safeguards.

Fourbital is doing things differently. The company uses mostly natural fibers, such as wool from Maine, and postconsumer materials, such as beanie pompoms made from recycled plastic bottles. It's also using semisynthetic fabrics, such as Modal and Tencel, which are derived from wood, bamboo and cactus leather. Semisynthetics are especially useful in making athletic wear, Strobeck explained, because they're durable and provide good wicking and thermal regulation.

Eventually, Fourbital will produce some of its own recycled fabrics in-house. In the back of the building near the company's loading dock is a storage room that will soon house a machine that converts fabric waste into felt and yarn.

"There's a lot of waste in apparel manufacturing," Strobeck said. "There are other small [apparel] brands in Vermont, and we'd love to take their waste, too."

When this reporter visited, almost everyone on the factory floor was engaged in skills development; Fourbital is cross-training its entire staff to perform different jobs, both to break up the monotony and to prevent repetitive-motion injuries.

In fact, almost everyone at the company is learning something new. Neither Strobeck nor Jordan Leach, Fourbital's brand and operations manager, had previous experience in apparel manufacturing before they launched the business last year.

"I'm not an accomplished sewist. I'm more of a big-picture creator," Strobeck said. "I've always had an interest in apparel for adventurers and joy seekers, the kind of clothes that you can hike [Mount] Philo, then go out to lunch in."

A 48-year-old New Jersey native who moved to Vermont a decade ago, Strobeck and her husband, Matt, own Delta Properties, a Burlington real estate investment firm whose properties include the South End building that houses Zero Gravity Craft Brewery. When they heard that Champlain Chocolates was moving some of its Burlington operations to Williston and had space available in its Pine Street facility, Strobeck jumped at the opportunity.

A former college athlete who played hockey and lacrosse at St. Lawrence University, Strobeck said she has dreamed for years of starting her own line of activewear for people who want clothes that are functional and fashionable.

"I've always loved to look great while I'm doing things," she said with a laugh. Strobeck grew up with three older brothers and often wore their hand-me-downs. She and her husband have four kids of their own — hence the name Fourbital.

Strobeck's management team includes some people with professional sewing experience. Production manager Kat Whitledge, who joined the company in July, is a tailor by trade and previously made custom women's clothing under her own brand, Kat Whitledge Basics & Bespoke. 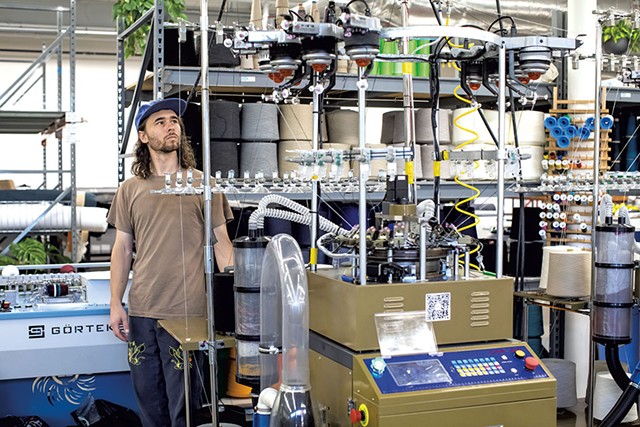 In the training classroom, Whitledge, who also has a master's degree in education, had laid out swatches on a table, which she uses to teach employees how to create different widths of fabric. Despite her tailoring experience, Whitledge has a learning curve of her own; making even a basic T-shirt can involve four different pieces of machinery.

"Each industrial machine does one thing and does it well, but it does it a lot of different ways," she explained. "So we're just figuring out what we have in our arsenal."

Skida founder and CEO Corinne Prevot said that, while her company hires other Vermont vendors to manufacture its products, she's excited to be working with Fourbital, which is less than a mile from her office.

"It's so awesome to have a capable and state-of-the-art facility just down the street," Prevot said. "Carey's vision and her focus on education is super inspiring, and that's what's going to set Fourbital apart."

In the future, Strobeck said, she envisions other local companies using her facility to prototype new products before making them there or sending them on to larger manufacturers.

The company has already begun creating a pipeline of future apparel manufacturers with help from the state. According to Susan Nostrand, Fourbital's strategic development coordinator, the company was awarded a $92,000 Vermont Training Program grant, as well as a $25,000 grant, the latter of which paid for summer internships for one college student and four high school students. Nostrand is also discussing future partnership opportunities with the Center for Technology, Essex; Vermont Technical College; and Vermont State University.

"We need to get more people into the sewing trades. There's a lot of demand in this area," Nostrand said.

The final piece, Strobeck said, will be getting the public on board when Fourbital's retail store opens in November.

"We're educating the consumer, too," she added. "Be conscious of the dollar T-shirt you buy, because there's a reason it's only a dollar."