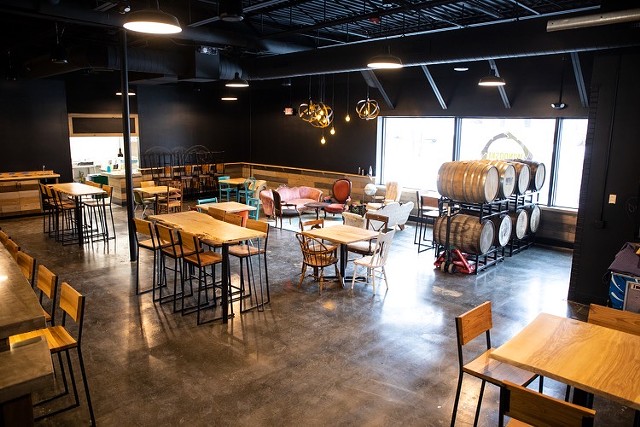 Winooski's only brewery, Four Quarters Brewing, opened its long-awaited new taproom and outdoor patio at 70 Main Street on Saturday February 27, founder and co-owner Brian Eckert said. It will be another month or two before production  moves from the brewery's original West Canal Street home to the new site.

Due largely to pandemic-related delays, the opening of the 8,000-square-foot building comes about eight months after the originally planned July date, but just in time for Four Quarters' seventh anniversary celebration in mid-March.

Renovation of the former bank building at the top of the Winooski traffic circle cost around $1.5 million, Eckert detailed. In early February, the state announced that Four Quarters received $125,000 in state tax credits, one of nine downtown and village center rehabilitation projects to earn various amounts.

Eckert said the new space will give his team of 15 ample room to grow in many ways.

Production will increase from the current 1,000 barrels annually to about 5,000 barrels in the first full year. The 4,000 square feet of indoor and outdoor public space can accommodate almost 200 guests, although COVID-19 restrictions currently limit seating to 50 percent of capacity. 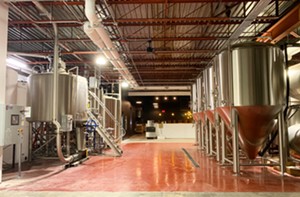 Ambitious plans for a rooftop garden are already in progress, with 160 garlic cloves planted in a crate system. The garden will produce herbs, tomatoes and vegetables for the taproom kitchen as well as for donation to the Winooski Food Shelf.

"I'm an avid gardener," said Eckert, who was inspired by a hospital rooftop garden in Boston. "I loved that idea, we had the space, and Four Quarters is supposed to be about the cycle of life."

Starting at noon on Saturday, February 27, guests with advance reservations for the taproom's seats — 45 indoors, 40 outdoors on heated patios — will be able to order draft beers to go with grilled cheese and other sandwiches, soft pretzels, and cheese boards served with crackers made with the brewery's own spent grains. Non-alcoholic options include local kombucha, housemade sodas and cold brew.

Kitchen manager Seth Anderson, formerly of C'est Ça  in Burlington, will gradually expand the menu to include pizzas and kids' fare with the help of Kayli O'Donnell, who is also the rooftop garden manager.

Future drink offerings  will include wine, hard cider and cocktails made with Vermont spirits. The taproom will initially be open on weekends only, with takeout available during the week. By May, Eckert said, he expects to be open daily, noon to 9 p.m.