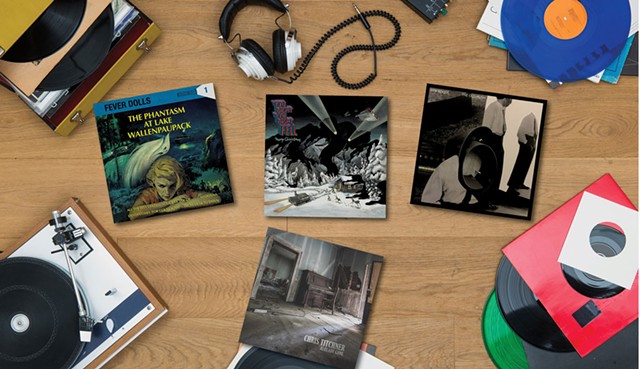 Vermont's music community is exceptionally vast in relation to the state's small population. It's also incredibly eclectic. That means Seven Days never runs out of interesting albums to review. In fact, we get more submissions than we know what to do with — including records from formerly local bands and artists.

Though we usually keep the focus hyper-local, once in a while we like to check up on some of our expatriate musicians. That's especially true if they've just put out new music. Included below are quick hits on four recently released albums from folks who used to call the Green Mountains home.

Once based in Burlington, Fever Dolls relocated to Brooklyn in the last year or so. Such is the path of many young, creative college grads who cut their teeth at one of Vermont's institutions of higher learning. The indie-rock group originally formed in the mid-2010s at Middlebury College under the hastily chosen moniker Iron Eyes Cody. But by 2017 they had dropped the name, partially because of a problematic history associated with the once-famous Italian American actor of the same name.

But the name change primarily signaled a shift in the group's overall tone from earnest Americana-rock into something else. Cofounder Evan Allis told Seven Days in 2017 that the new name signified "a level of fantasy and theater previously reserved for the extraordinary." The title of the band's latest album, The Phantasm at Lake Wallenpaupack, certainly ramps up the drama, as does its old-school Hardy Boys-style album art.

Of the record's five tracks, "Out of Vogue" particularly fulfills this long-awaited prophecy, even more than Fever Dolls' unhinged, Clinton-scandal-referencing first single, "Gennifer Flowers." The disco-rock hybrid presents its dual vocalists, Allis and Renn Mulloy, in glorious lockstep, carving through choral outbursts, sensational swells and snarling riffs. It's as catchy and danceable as anything the group has produced.

Though the rest of the EP never quite reaches the ecstatic intensity of "Out of Vogue," its other offerings are among the strongest the group has produced in its two lifetimes. "Death Comes (for Good Sons)" is power-pop Americana at its finest, and "From Dusk to Dawn" is a gratifying, pop-folk anthem for uncertain times.

Stream The Phantasm at Lake Wallenpaupack on Spotify.

It's been about 10 years since we heard from St. Albans native Matthew John Thoren. Last time, the Japan-based musician had just released an album called American Audiences with a duo named West Tokyo Sound. The scrappy, off-kilter sounds of that LP reemerge on The Night the Night Fell, a grand assemblage of off-center quirk-pop from his band Merry Christmas.

As Thoren points out in an email, the band is composed of five players from four different countries: Japan, Ireland, the United Kingdom and the United States. This cultural convergence likely informs the album's fresh and unpredictable approach to songcraft. At times, the album recalls the glory days of early 2000s indie rock, when bands such as Deerhoof, Architecture in Helsinki and Animal Collective were just hitting their strides.

Merry Christmas' songs seem to defy all convention, an almost meticulous shunning of all things normal. Songs dart and gallop all herky-jerky through mismatched time signatures, fractal structures and free-associative melodies. They have an almost childlike vibe, not in terms of maturity but rather of unhindered creativity.

"Darkness Will Find Us All" perfectly encapsulates this style. It deescalates from a frenzied choral blast to a stuttering, almost jig-like landing point. "Forest of Bones" winds two opposing melodies over a jangle of guitar. And the epic "For the Lulls" slowly reveals its strangeness through several movements that unfurl across its six minutes.

The Night the Night Fell will be available on August 1 on all streaming platforms. A physical release is scheduled for October.

Is it really fair to call Ben Roque an expat? The singer-songwriter did leave Vermont in 2019 to embark on a cross-country journey of playing music and working odd jobs, intending to return at some point in the future. But the coronavirus pandemic left him more or less stranded in SoCal — which, admittedly, is not the worst place to ride out the current crisis. In an email, he says he plans to return to Vermont whenever he can.

As in his 2019 effort, Amuser, Roque's music is dark and stormy.His salty concoctions, which range from bluesy piano ballads to stripped-down glam-punk stingers, bring to life sorry bastards, booze-soaked gamblers — a whole cavalcade of back-alley scum. Roque writes and performs with such flair and pomp, he makes even the dregs of humanity sound captivating.

"Get Behind the Eight Ball" is a jagged, guitar-driven scorcher that evokes the Kinks and T. Rex. Roque returns to this energy later on "Widow Susan Road," a rambunctious blast of near-hard rock.

But Roque's signature style is evident in tracks such as "Off Your Tiltawhirl" and "Name on the Moon." On these tunes, the singer-songwriter revels in melodically haunting twists and turns.

The Old Hush is available at benroque.bandcamp.com.

Chris Titchner was well known in Chittenden County's singer-songwriter scene back in the '90s, both as a solo artist and with rock band Three Mile Limit. The Shelburne native hasn't been local for some time, having relocated to North Carolina about 20 years ago. But longtime Vermont artists and fans are likely to remember his name.

It's also been a hell of a long time since Titchner released any new music — 15 years, to be precise. As he points out in a message to Seven Days, he dropped his long-gestating record in February, just before the pandemic radically changed everything, especially for musicians on the precipice of putting out new music. Or, in Titchner's case, those who were planning a comeback.

For me personally, listening to Already Gone is like stepping back in time 25 years to the former Champlain Valley Union High School coffeehouse, a staple of the school's '90s arts scene. The singer's brand of plaintive acoustic rock thrived at the time, and it still does in many circles. Think Counting Crows and Matchbox Twenty. It may not be the edgiest kind of music, but plenty of people still delight in that particular sound.

Titchner apparently takes exceptional care of his voice. Not only has his songwriting style remained the same, but so has his voice. He sings with an unhindered, crystal-clear wail, gliding with ease through rollicking tunes such as "No Easy Way Out" and "Waiting."

"Kerosene" is the biggest surprise, a jazzy strummer front-loaded with a full horn section. It's a nice change, given that the album is largely guitar-centric.

Already Gone is available at christitchner.bandcamp.com. Titchner performs as part of the Burlington City Arts Summer Concert Series on the Church Street Marketplace on Wednesday, July 29.