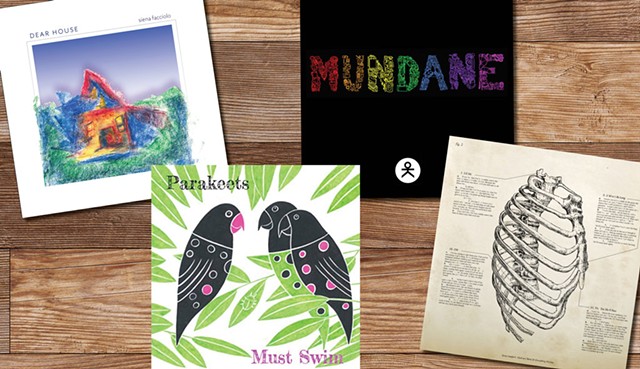 In 2018, Seven Days reviewed more than 100 albums from local bands and musicians. Given our mission of hyper-local coverage, we frequently have to pass on reviewing albums that come to us from nonlocal creators. Besides, we have more music coming our way from within Vermont than we can keep up with.

However, we do like to keep tabs on formerly local artists who are eager to share their latest works with fans in their home (or adopted) state. Take a look at these four recently released albums from Vermont expats. Also, is there a word like "homesick" for when you're the one still at home missing the person who's gone away? Because you might feel that way after listening.

Educational opportunity is among the many reasons Vermonters leave the Green Mountains. Montpelier native Siena Facciolo relocated to Rochester, N.Y., where she studies music theory and musicology at the University of Rochester. Her debut album, Dear House, was eight years in the making, according to a profile recently published in her school's Campus Times. Specifically, the song "Morning" dates back to when the singer-songwriter was a 14-year-old piano camp student.

Facciolo's vocals and piano skills are the main event on the 10-track album, though a few Rochester-based collaborators flesh out some of the tracks with cello, drums and guitar. The guests' contributions serve mainly as accents to the artist's commanding presence.

Genre-wise, Dear House is somewhat unclassifiable. Folk, R&B and soul are included as genre tags on the album's Bandcamp page. But subtle nods to Latin jazz ("We Cry"), Broadway torch songs ("Love Me Right") and adult contemporary pop ("Meteor") suggest that Facciolo is up to the task of carving out unique space.

"Bittersweet," a ballad of sheer yearning, recalls piano-pop masters like Sara Bareilles and Vanessa Carlton, or perhaps even early Tori Amos, at least in terms of the latter's classically leaning piano structures.

Though she's based in New York, Facciolo reps Vermont hard on "Phish Food," a song of romantic devotion — as opposed to product placement from Ben & Jerry's. "I want to be your first bite of Phish Food ... I want to be there when the Red Sox lose," she sings over the track's first few softly struck chords. You can take the woman out of Vermont...

Dear House is available at sienafacciolo.bandcamp.com.

Ben Roy is a cofounder of Montpelier's State & Main Records and a former member of notable Montpeculiar bands Concrete Rivals and Pistol Fist, among others. He is now a recording engineer in Seattle, where he lives with his fiancée and bandmate Katie Weller. Before they left, the two joined forces with capital city bassist Colin Gunn to form the "doo-wop psych-rock" outfit Parakeets. The band's debut, Must Swim, shows the world exactly what that bonkers genre descriptor means.

OK, "doo-wop psych-rock" might be a bit misleading. You won't hear anything that sounds exactly like the Five Satins crossed with Jefferson Airplane. But you can decipher the trio's intent on songs such as "Hill or Orange?" The low-stress, Weller-led tune pairs heaping mounds of cutesy, harmonized background vocals with freak-folk guitar strumming à la the Lovin' Spoonful.

Nonsense syllables are a hallmark of doo-wop music, and "Pamplemousse" has "ba-ba-bas" to spare. Cascading support vocals rain down on the mid-tempo rock tune, reminiscent of early Super Furry Animals.

Silly ditty "Super Durable Clothes Song" could also be a flagship tune. "Supe-y du-ra, supe-y du-ra," sings Weller atop a groovy indie-rock riff. It's both whimsical and low-key cool, like a hipster ironically wearing a vintage "Sesame Street" T-shirt. In fact, that descriptor could be applied to the album as a whole.

Must Swim is available at CD Baby.

Xenia Dunford, Flesh and Bone (& Everything Within) Side B

Singer-songwriter Xenia Dunford dropped a two-part EP in 2018, Flesh and Bone (& Everything Within) Side A and Side B. And before Seven Days could get around to reviewing Side B, the artist skipped town for Colorado's Rocky Mountains.

Though she staggered the releases by only a matter of weeks, Dunford explained on her website that the two sides were very different projects, at least in terms of how they got made. She recorded Side A at Future Fields in Burlington and dipped down to Q Division Studios in Somerville, Mass., to work with Somerville Symphony Orkestar's Joel Edinberg for the follow-up.

Lyrically, Dunford's outlook is aligned across the project's two parts. That is to say, her ruminations on the self, relationships and the world around her are still plenty dark and wonderfully nuanced. Stylistically, Side B touches less on gloomy Americana than its counterpart, though a touch of that genre still remains — thank you, pedal steel. Instead, Dunford unveils a sleeker, more contemporary sound that subtly draws on jazz and soul.

Of the EP's four tracks, "It Won't Be Long" and "This Too Shall Pass" stand out as the most diverse. On the former, naked upright bass tones support Dunford's opening phrases, with hot snares and hi-hats subsequently rolling in. The track's spaciousness emphasizes the emptiness and longing felt in the lyrics: "I don't question the past / I just run to the wind / But I just have to ask / Are you happier for it?"

"This Too Shall Pass" is similarly stripped. Essentially just Dunford and piano — with a brief inclusion of pedal steel and cello — the delicate track smolders like a candlewick that's just been extinguished, its thin wisp of smoke pluming outward into a vast nothing.

Flesh and Bone (& Everything Within) Side B is available at xeniadunford.bandcamp.com.

Liam Corcoran — aka LoKi — seems to love concept albums. In 2017, the rapper and beatsmith pulled off the remarkable feat of writing and recording a record in 24 hours. Each track on 0-25 (The 24HR Challenge) represented a year in the then-25-year-old's life. Though perhaps an arbitrary feat of endurance, the result was more than pleasing.

So what's the gimmick with MUNDANE? In contrast to the rambling scope of 0-25 (The 24HR Challenge), this time LoKi produced an eight-track collection of slow-burning bangers that appears to chronicle just one day of his life — or, perhaps, the life of any typical young person.

"Morning Shit" opens the album with wonky sub-bass tones and a parade of various voices all bidding LoKi an annoying "Good morning." The rapper rambles like a drive-time radio DJ on Quaaludes, darkly pontificating on what the day might hold.

Stark trap beats usher in "Breakfast," while a gurgling organ sweeps in to undo a bit of the iced-out track's prickliness. The sickly feeling continues on "Internet," a nauseating recap of internet culture in LoKi's lifetime.

In "Evening Shit," a sequel to "Morning Shit" both in terms of production and sentiment, LoKi beseeches his listeners to hang on to each other in the face of a cold, indifferent world, if only to feel some semblance of togetherness.

MUNDANE is available at milkhaus.bandcamp.com.


Correction, January 17, 2019: An earlier version of this story misspelled the name of LoKi x Rainbow's album.