Four for Mayor: Queen City Candidates Vie for the Helm 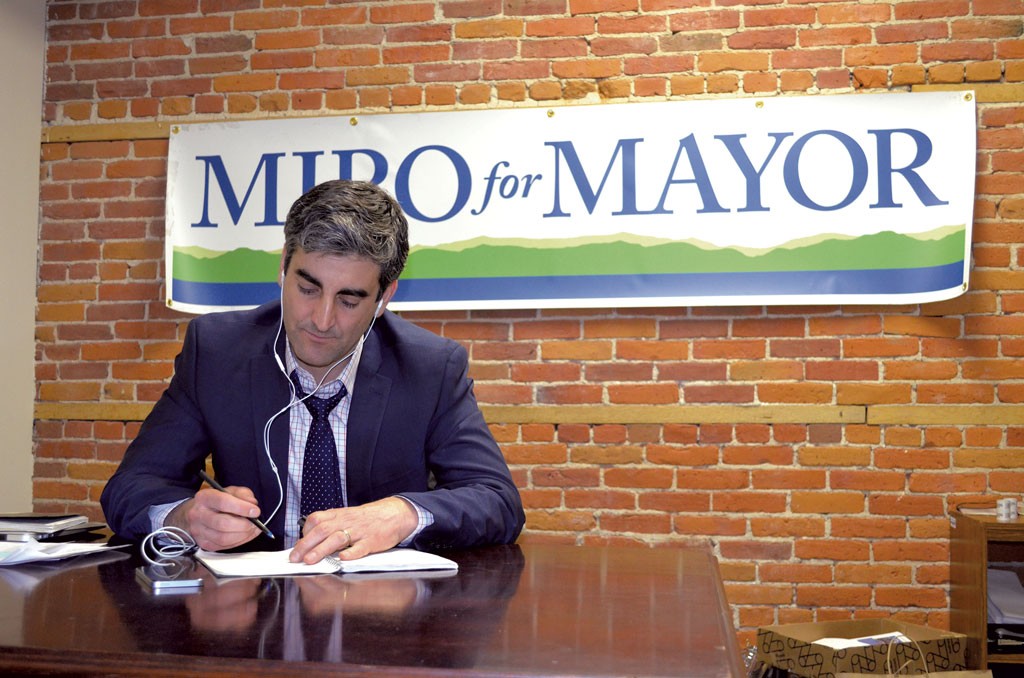 One of the four candidates for Burlington mayor has a well-oiled campaign organization, complete with phone banks and deep-pocketed donors. Another keeps a lonely vigil at Dunkin' Donuts each morning, hoping to encounter voters. A third has been working the crowds at diners and farmers markets, while a fourth recently turned to standup comedy to get his story out.

Incumbent Miro Weinberger, a developer in his past life, has the best-funded campaign. Challenging him are three men who've never spent time in elected office — dog walker Loyal Ploof, engineer Steve Goodkind and writer Greg Guma. Though they lack political experience, each makes the case that he is more in touch with the Queen City.

Seven Days tagged along with each candidate last week as he worked to connect with voters during the countdown to the March 3 election day. Here's what we saw.

When Mayor Miro Weinberger walked into his campaign office around 7 p.m. Thursday, the place was abuzz. The maze of rooms teemed with college-age kids, giving it the feel of a dorm party. (He's using space in the Vermont Democratic Party's campaign headquarters on College Street.)

Every Thursday, a group of Young Democrats makes calls for the Queen City's Democratic candidates. That night, they dialed 2,700 voters.

Weinberger, who wore a navy suit, greeted several of them with handshakes before heading into his office, where, tie loosened and earbuds in, he began to make calls, too.

First on the list: an ambivalent voter. Weinberger introduced himself to her on the phone. "[City councilor] Tom Ayres said ... you had concerns about my approach to development," Weinberger said. He spent the next 20 minutes engaged in a conversation that touched on preserving the land behind Burlington College, code violations and his commitment to affordable housing. From time to time, he jotted something down in a black spiral-bound notebook he carries.

This is the mayor's modus operandi: He's attentive and thorough, often at the expense of speed.

On the campaign trail, Weinberger's sterling fiscal record — which opponent Goodkind dismissed as "no special wizardry" — has often played second fiddle to fears that he'll orchestrate a building boom.

"It's disconcerting when people who were excited about me in the past have concerns," he acknowledged before making that call. "I've had some of that." But Weinberger, who appears most comfortable in the policy weeds, said, "It's a discussion I'm glad we're having. I think we're getting beyond the abstractions and starting to have a more productive conversation."

Twiddling his pen, the mayor looked harried. His day had included coffee at 8 a.m. with Old North End artists and business owners, a 75-minute televised debate, and an appearance in front of the police union, on top of his normal duties. Now it was 8 p.m.

Does he enjoy the job he's fighting to keep?

"I love this job," Weinberger said, forcefully. To explain why, he referenced a lengthy Oliver Wendell Holmes Jr. quote on the "chief worth of civilization." An excerpt: "More complex and intense intellectual efforts mean a fuller and richer life."

"This is probably a crazy way to answer this question," he said quietly before moving on to a more conventional response about having assembled a great city hall team.

When he went into the hallway for pizza, a peppy college student greeted him enthusiastically. He told the mayor he'd been making calls for him all evening and had gotten only positive responses. 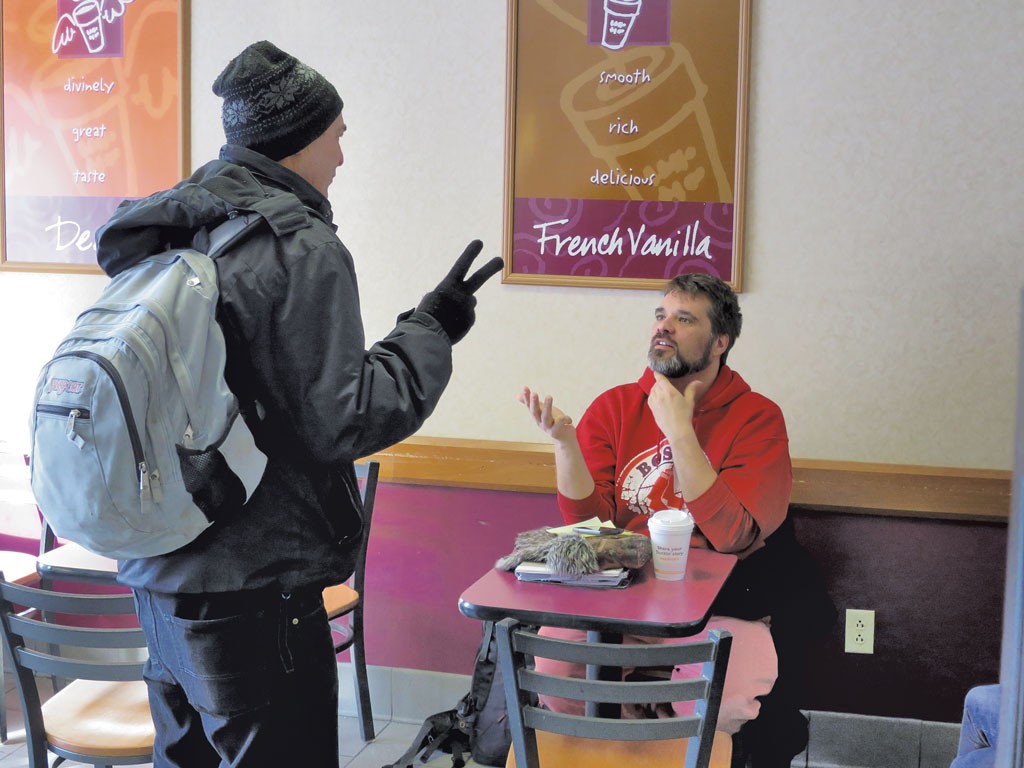 A steady flow of customers entered, departing with steaming Styrofoam cups. During the hour that Ploof stayed, just one person — a friend on his way to work — stopped by his table. The man dropped off a pair of gloves for Ploof, and they made plans for what would be the candidate's first and only literature drop, that weekend.

Nothing about Ploof or his table would have suggested to patrons that he was running for political office. He sported pink pants stained with road salt and a worn Red Sox sweatshirt. "I'm the poor man in the race," he told a reporter.

Ploof, 44, runs a dog-walking business — he explained that pink pants make him more visible to drivers — and his canine predilection comes across strongly in his policy proposals. He wants the city to use "dog-friendly" salt on its sidewalks, and he has proposed putting a dog park on part of the land to be traversed by the Champlain Parkway.

He's running on the Libertarian ticket, but Ploof, a perennial candidate, has history with just about every Queen City political party — the Progressives, the Greens, the Democrats and the Republicans.

By his own admission, he's the least polished of the four candidates, but he insists that's a virtue. He's also the most visceral in his criticism of the incumbent: "I voted for Miro. It almost makes me want to vomit."

Taking an occasional drink of his coffee, Ploof seemed unperturbed by the lack of attention other patrons paid him.

Ploof's most passionate about what he calls the city's mistreatment of homeless people. He said he spent a year on the streets, sleeping at bus stops in below-freezing temperatures. Today, he rents a one-bedroom apartment in the New North End that he shares with his mother but can still barely afford.

The candidate, who admitted to feeling "burnt out" from the campaign, said he's sat at Dunkin' Donuts from 8 a.m. to 9 a.m. Mondays through Fridays since the race began. That morning, he blamed the bad weather for the poor showing.

Single-digit temps wouldn't stop him from the next activity on his schedule: taking a Tibetan mastiff and a pit bull for a stroll. 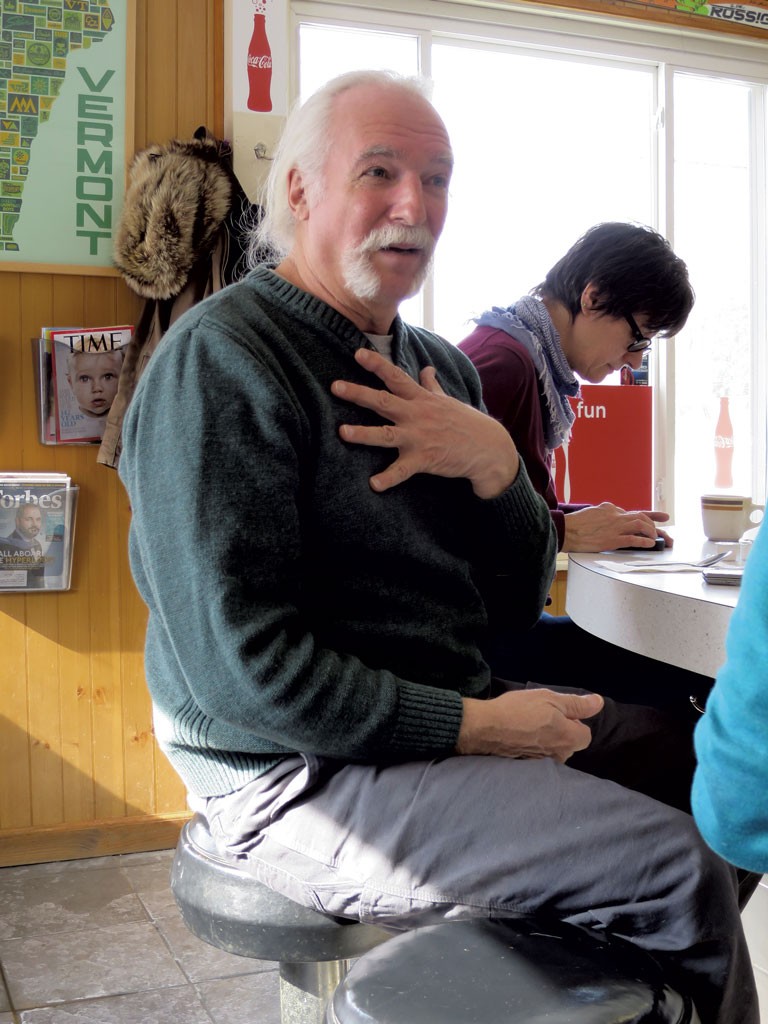 Steve Goodkind drank Coke through a straw at the horseshoe counter of Handy's Lunch. The Progressive candidate was there to capitalize on the midday rush, but at 11:15 a.m. on Friday, the restaurant was still quiet. Wearing work boots and gray Carhartt pants, he chatted with his wife. On the counter, a bright orange binder contained a large stack of typewritten pages of his policy positions.

When a reporter arrived, the 63-year-old former public works director whipped out an old budget summary for his department and — not for the first time — began rebutting the mayor's claims that he mismanaged the department. "It's so dishonest," Goodkind said. "It's disgusting." He's been defending his record since the first debate, when Weinberger first cast aspersions on his stewardship.

Despite the spat, Goodkind feels good about the campaign. "I think he's feeling the heat," he said of Weinberger. Unlike the sitting mayor, who uses conditional phrases — "If I have the privilege of being reelected..." — Goodkind starts his sentences with "When I'm mayor..."

As the counter filled up, Goodkind made the rounds among diners, asking each: "Are you a Burlington resident?" If they were, he'd continue: "I don't want to ruin your lunch, but I'm running for mayor."

One man mentioned that his motorcycle was at Goodkind's son's repair shop, Moonlight Cycles, in Winooski, which spawned a lengthy conversation about bike mechanics.

Another guy recognized him from the slopes. Goodkind, who sports a distinctive fur hat and a long white ponytail, has been skiing at the same mountain since 1969. "If I was running for mayor of Smugglers' Notch, I'd win in a landslide," Goodkind said when he returned to his stool. 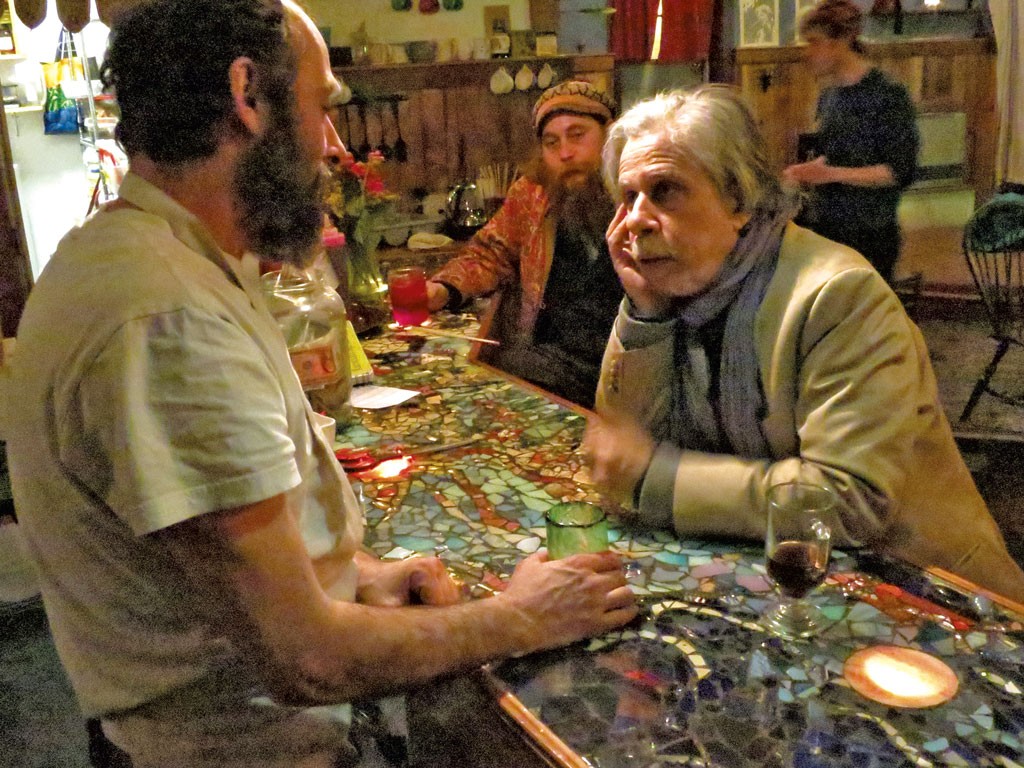 At the Wellness Co-op's open mic night last Friday, a large man in a diaphanous pink frock played the keyboard. A guy with a guitar delivered David Bowie renditions, and another performer sang a song in a "fictitious alien language."

When it was his turn to take the stage, Greg Guma, the independent candidate for mayor, took off his tan sport coat and told the much younger crowd: "I'm in the middle of this performance piece I call 'running for mayor.'"

His act that night: telling stories about his childhood and how he came to be a candidate. Guma, 67, recounted a child-acting gig in New York City that ended when "my parents realized I was becoming an egomaniac." And he recalled flourishing on his Catholic high school's debate team.

The writer and activist ran for city council in 1981 and 1989, but it's been more than two decades since he's had to dust off his debating skills. Still, his polemical flair has been on full display during several mayoral debates — he's the only candidate who palpably enjoys them. But he's also prone to overly nuanced answers that get deep into Burlington's political history. His challenge, Guma said, "is to have to boil it down, to not have too many ideas."

The 15 or so people at the Wellness Co-op laughed at Guma's stories but seemed less interested in the campaign pamphlets he passed around afterward.

From there, Guma walked down North Winooski Avenue to Pyschedelicatessen, a quirky café and performance space that eschews fixed prices in favor of donations. It's run by Phinneus Sonin, one of several people who goaded Guma into running.

His face illuminated by the green glow of a nearby lamp, Guma was animated describing his epic science-fiction novel, Dons of Time, which was published by Fomite Press in 2013. Sipping black coffee at 8 p.m., he was just as animated when talk turned to politics. Guma said he'd lost 10 pounds on the trail, noting, "Intellectual energy burns calories, too."

After a lengthy recap of an eclectic career — which included covering the last Burlington mayoral election as a journalist — Guma got up to talk strategy with Sonin. Nearby, a man at the bar drank a beet smoothie.

"Don't make me out to be too much of a hippie," Guma told a departing reporter. "I am wearing a suit."

The original print version of this article was headlined "Four for Mayor: Queen City Candidates Vie for the Helm"