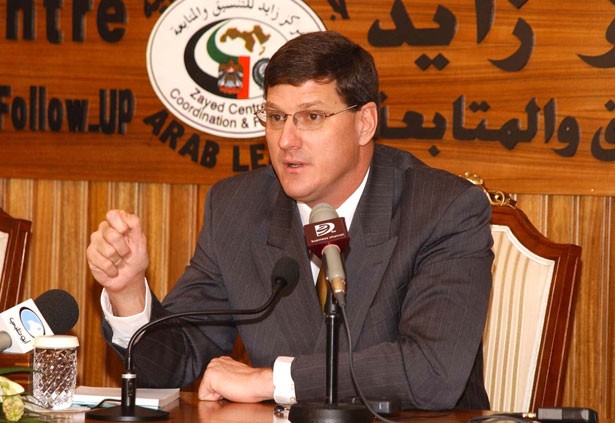 Scott Ritter is not the man the Department of Defense hoped he would be.

The former intelligence officer made international headlines in 1998 by resigning in protest as chief weapons inspector for the United Nations Special Commission. A year later, Ritter published Endgame: Solving the Iraq Problem - Once and for All, a critique of U.S. Iraq policy. The book, which encountered significant resistance from the Pentagon, prompted the Washington Post to call Ritter an "American rarity."

Ritter, now 47, has furthered his iconoclastic reputation with five subsequent books that challenge the U.S. government's foreign policy. Target Iran: The Truth About the White House's Plans for Regime Change, warned against what could be America's next pre-emptive invasion of a sovereign nation. Ritter's latest title, Waging Peace: The Art of War for the Antiwar Movement, critiques the peace movement.

Earlier this week, Seven Days spoke with Ritter by phone in advance of his upcoming series of lectures in Vermont.

SEVEN DAYS: In 2002, you claimed to be "holding the mirror up" to elected officials. But these days, you seem to be holding their feet to the fire. Has your approach changed?

SCOTT RITTER: The situation's changed. In 2002, I was basically asking policy makers to do their job. Today, we have to look at this in a harsher light. Action was taken on an incomplete data set. And so now, it's not just a matter of holding a mirror up to people, it's a matter of pointing out that they failed to do their job.

We are in a war: Over 4000 of our servicemen have died. And it's not just Congress or the elected officials that failed to perform; it's the entire nation collectively, from the president, the congress, the media and the people. So, yeah, I'm a little bit harsher in my critique, because I think the circumstances warrant it.

SD: Speaking of the media, what role does it play today?

SR: I think we need to recognize that when we speak of "the media" informing the general public, we're really speaking about mainstream media.

I think people need to recognize and understand that when you turn on TV [or] buy a newspaper, you cannot view this as a singular source of information upon which to base your own independent point of view - you're getting propaganda.

It's not fatal to a society to have a biased media. Take a look at England, where they have a plethora of newspapers, all of which possess strong bias: All you need to do is put on your bias filter, and you can get to the kernels of fact. Here in the United States, we try to pretend that there isn't a bias - you know, that it is "All the news that's fit to print," that it is "Fair and Balanced." That's garbage, and we need to understand that.

The problem isn't the media. The problem is in the consumer of its product, the people of the United States. The people are so lazy, so ignorant, that they delude themselves into believing that when they open up a newspaper, they are in fact getting unbiased reporting. And the end result is a malinformed public that cannot hold its elected officials to account.

SD: What about investigative journalists like Dahr Jamail (Beyond the Green Zone: Dispatches from an Unembedded Journalist in Occupied Iraq) and Jeremy Scahill (Blackwater: The Rise of the World's Most Powerful Mercenary Army)? What role do they play in shaping public consciousness of U.S. foreign policy?

SR: I have the highest respect for Dahr Jamail, Jeremy Scahill and others. But they're preaching to a choir - they're not mainstream. I mean, Scahill wrote a book on Blackwater that had a brush with mainstream, but it's gone now. He's not a driving force in mainstream media. Dahr Jamail is not reporting for the New York Times, is not on "60 Minutes," isn't impacting mainstream America.

SD: In December, you said that war with Iran was "inevitable." Will it happen before the Bush administration cedes power?

SR: People need to wake up: We are at war with Iran, as we speak, today. These are war-like policies. We need to understand that a war with Iran is a broad-brushed endeavor. What's going on right now in Iraq - the attempt of the Iraqi government at the behest of the United States to nullify the Mahdi Army - is seen by several analysts, myself included, as a precursor to a larger conflict with Iran . . . I think there is a real risk of military action against Iran prior to the Bush administration leaving office.

SD: You've suggested that the next U.S. president should "divorce" him- or herself from a policy of "regime change" in Iran. What are the chances?

SR: I think that, of the three candidates in the mainstream, only one has the potential. Barack Obama has stated that he will host a summit of Middle Eastern nations - and not just talk to them, but listen. In doing that, we're headed down the path of responsible interaction.

SD: What's your critique of the peace movement, in a nutshell?

SR: There is no peace movement. I mean, "peace movement" implies a nationally based, viable entity that has the ability to impact policy. We have a loose-umbrella organizational structure that has a whole host of grassroots movements plugging themselves in. But it's not a viable movement . . .

SD: Do you think George Bush will ever visit Vermont?

SR: I don't know [laughs]. Why would he? What's in it for George Bush?

Scott Ritter will speak during "Media Silence on Iraq and Iran in an Election Year," a Vermont tour organized by the Peace & Justice Center of Burlington. Wednesday, April 2, at the Robert A. Jones House at Middlebury College; and Thursday, April 3, at the McCarthy Arts Center at St. Michael's College. Both at 7:30 p.m. More info, 863-2345, ext. 3.