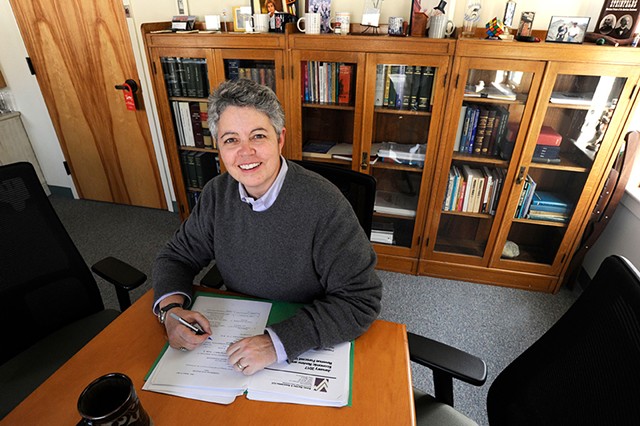 In June Tierney's office, everything that hangs on the walls or sits on the shelves has a deliberate purpose, just like the woman behind the desk.

Take, for instance, the True Grit movie poster. Tierney identifies with Mattie Ross, the ponytailed 14-year-old upstart who endures obstacles in the classic Western while pursuing justice for her murdered father.

Tierney's own true grit was tested when she served in the Army as a lesbian in the 1980s — an era before "don't ask, don't tell," when gays faced discharge for their sexual preference. Not being able to mention her personal life at work was humiliating, she said.

"I felt completely robbed because, but for that public policy or whatever you want to call it, I would have served in the military for my career," Tierney said.

Tierney traded that career for civilian public service: Instead of serving as a soldier in defense of her country, the 53-year-old defends the letter of the law. She spent the last nine years as a lawyer with the state Public Service Board and seven years before that at the Public Service Department, laboring behind the scenes over energy policy legalese.

In January, she took over as Gov. Phil Scott's public service commissioner, heading the department where she once worked.

Observers don't know what the appointment of this earnest civil servant signals about Scott's plans for energy policy following an election in which he pledged to push for major changes, including banning ridgeline wind development.

Where does Tierney come down in the debate over whether Vermont has too much or needs more large-scale renewables? "It's not about me and my views," she said. "It's about public policy."

She would, she said, have been willing to do this job for either Scott or his pro-renewables Democratic opponent, Sue Minter.

Tierney is not the ardent stick-with-carbon-fuels appointee that environmentalists feared a pro-business governor like Scott might choose, said Ben Walsh, climate and energy program director for the pro-renewables Vermont Public Interest Research Group. "You're getting a legitimate expert who's a career public servant," he said.

But neither is she the house-cleaning outsider whom those frustrated by Vermont's recent energy-siting policies had desired.

"It was not an appointment I expected," said Annette Smith, who, as executive director of Vermonters for a Clean Environment, is the state's most outspoken critic on renewable-energy siting.

As the quasi-judicial Public Service Board's lead lawyer for five years, Tierney helped write many of the decisions that critics of large-scale wind view as favorable to renewable-energy developers. Smith is also wary of the revolving door between the board that regulates utilities and the department that is supposed to represent utility customers.

Tierney was so steeped in cases as the board's lawyer that she's recused herself from all projects pending before the board as of December 15. Those include Vermont Gas' natural gas pipeline and the seven-turbine Swanton Wind project.

But like Walsh, Smith expressed optimism that perhaps this deliberate by-the-books lawyer can bring order to what she sees as an unruly permitting process. "If the Scott administration slowly moves things back to neutral, that is a better democracy," Smith said.

Tierney's appointment is not the only hard-to-read message Scott has sent, energy advocates say.

Smith and fellow critics of former governor Peter Shumlin's pro-renewable policies loved Scott's campaign promises, including the wind moratorium and his pledge to give communities more say in where solar projects are sited. But, they wonder, will Scott deliver?

"Obviously, we would have [already] loved to have seen [a moratorium]," said Christine Lang, who's trying to halt Swanton Wind, which would be built next to her home. "It's not moving as fast as we would have liked." 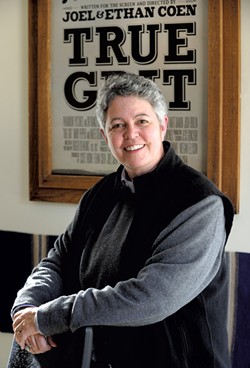 As it turns out, she will likely never see that moratorium. Though he insisted he'd work for one as recently as December, Scott acknowledged in a recent interview that he'd never get such a policy through the legislature. Nor does he have the legal authority to simply ban wind projects via executive order.

"We have contemplated a moratorium and don't feel as though that'd be the appropriate path at this point," Scott said. "We're contemplating another way to prevent ridgeline wind."

That includes trying to stop the Swanton project, the largest pending wind proposal in the state, Scott said. Though developers Travis and Ashley Belisle argue that their hillside site is no mountaintop ridgeline, the governor said opponents have persuaded him that the site is unsuitable.

How can Scott halt projects without enacting a moratorium? Those who follow energy policy in Vermont say a governor has considerable, though not all-encompassing, power to affect the outcome of energy-development cases.

The people Scott appoints to various state agencies — including the Public Service Department and the Agency of Natural Resources — have leeway in interpreting data about a development's potential effect on the environment. That can make or break the project's prospects for getting the necessary certificate of public good from the Public Service Board.

"The governor has put people in agencies who are there because they've expressed an ability to support these policies," Tierney said. "From a Scott administration, I think you could fairly expect to see a Public Service Department that is saying, the public good requires there be no wind on ridgelines, and here's the evidence."

Tierney has already shown signs of shifting wind policy. In mid-January, she filed comments to the Public Service Board on proposed new rules governing wind projects' sound emissions. Tierney recommended that the board lower the sound threshold allowed outside neighboring homes from 45 decibels to 42. She also argued that the board should broaden the range of factors it considers when judging turbine sound to include the impact on neighbors.

Olivia Campbell Andersen, executive director of the trade group Renewable Energy Vermont, called Tierney's comments "a drastic shift" that could amount to a moratorium. "The requirements go beyond what is technically possible" and would prevent even small wind projects from being built, she said.

Campbell Anderson said the Public Service Department's interpretations have "a tremendous influence" on the board's decisions.

Indeed, that seems to be the case. Last Friday, the board issued proposed rules on sound emissions that are arguably even more restrictive than those Tierney requested — 42 decibels during the daytime and 35 decibels at night. Smith still finds the levels, and the state's enforcement of sound standards, insufficient and hopes for more changes before they are enacted.

Scott will also soon put his imprint on the Public Service Board.

The governor will pick a chair to succeed James Volz, who was appointed to consecutive six-year terms by former governors Jim Douglas and Shumlin. As the only full-timer on the three-member panel, the chair has considerable power over the board's direction.

"That's huge," said Richard Sedano, who works on energy policy for the Regulatory Assistance Project in Montpelier. "There are a lot of choices in the way a board manages cases. They can be creative."

Volz has stayed on the job past the March 1 end of his term, as Scott has not yet interviewed replacement candidates. The governor said he wants "someone who is fair, judicious and shares in some of my vision."

Scott said he also wants a chair who can make the board "more user-friendly. It doesn't seem as though it's user-friendly out there."

Lang agrees. When she testified before the board about the Swanton project, "It's like we weren't even there," she said. "You need someone who listens to the people."

Vermonters should expect shifts in how the state's energy policy is delivered as one governor takes over from another, said Sedano, who served as public service commissioner under Democratic governor Howard Dean.

"I think, from Dean to Douglas, it changed quite a lot," he said. "The new people in Douglas' administration were laser-focused on high electric rates ... What we were seeing during the Douglas administration was a kind of passive approach to anything that wasn't about lowering rates."

Tierney said affordability is central to Scott's administration but won't be the only consideration. Energy-policy decisions will reflect his commitment to reaching the state's goal of 90 percent renewable power by 2050, she said.

But Campbell Andersen contends that the state can't meet that goal without wind power — "especially if we want to be energy independent," she said.

Scott disagreed, though he may have a different definition of energy independence. On a recent trip up north, the governor sought to solidify the state's relationship with Hydro-Québec in hopes that the Canadian hydroelectric company can supply more renewable power to Vermont. That, coupled with new forms of energy still in development, would bring Vermont to its goal, he said.

"I'm confident we do not need ridgeline development," Scott said.

Tierney agreed that the goal is reachable and is one she'll work to achieve as a soldier in Scott's army. She didn't seek the job as commissioner, she said, but "when the governor calls, you say 'yes' in my world."

The Army veteran and the lawyer in her make the difficult job sound simple. The human being — the one whose personality is on display in the décor of her downtown Montpelier office — appears to know how hard the job is.

On the conference table in her office, just below the True Grit movie poster, sits a crystal ball. "A lot of what we do is looking into a crystal ball and planning for the future," she said.

But reality more resembles what she calls her "muddled ball," a dark green glass orb that sits on the windowsill. "That's the one I actually look into," she said.