Former Schools Are Being Used for Childcare, Homes — and Community 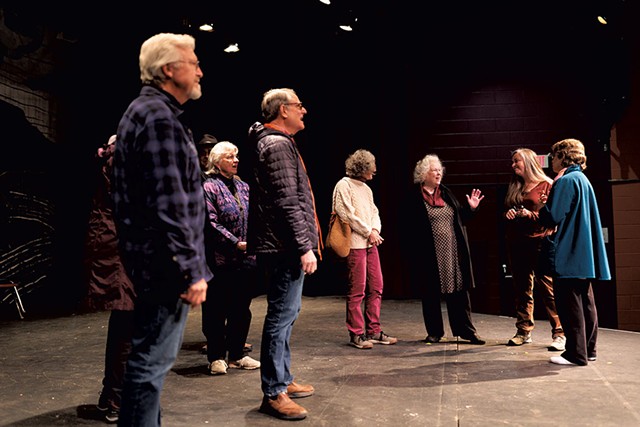 In 2018, Rochester High School closed its doors. For years, enrollment had been dropping; the school's final graduating class had just two students. Prompted by the passage in 2015 of Act 46 — a Vermont education law that encourages school districts to merge into larger units — Rochester joined with Stockbridge to form a unified school district and started sending its high schoolers out of the district.

With the closure came a sobering reality. For years, the space had been the nucleus of the town, hosting meetings, sporting events and performances.

"When the high school closed, I think there was a sense of grief on some level," said Vic Ribaudo, cochair of the Rochester High School Repurposing Committee, a volunteer group formed in February 2020 to explore options for the building.

A vote in March will determine whether the town should purchase the building from the school district for $1 to allow the committee to start implementing its plans.

"One of the hopes we have in establishing this [building] as a multiuse facility is to bring intergenerational connectivity, engagement and energy back to the town center," explained Ribaudo.

Even before Act 46, schools were closing regularly in Vermont, owing to dwindling enrollment numbers. But with the passage of the landmark education law, the number of school boards in the state was reduced by more than 150. State officials have not been tracking the number of school buildings that have closed but can say with certainty that at least 20 schools have shut their doors since 1998, according to Ted Fisher, director of communications and legislative affairs for the Vermont Agency of Education. That number is likely higher, though. For many of the newly formed merger districts, closing a school building made the most financial sense.

As Vermont's education system transforms, so do these spaces. They are being repurposed to help address other longtime and common needs in the state's rural towns: affordable housing, economic development, childcare and civic gatherings that keep communities cohesive.

"This is not unique to Rochester, Springfield or any other town," explained Kathryn Schenkman, cochair of the Rochester High School Repurposing Committee. "It is across the board that these towns are having to figure out how to pivot."

Wilmington is a case in point: A school district merger in 2004 left the small Windham County town with a vacant high school smack in the middle of its business district. A group of concerned volunteers formed the Old School Enrichment Council and got to work. "It was a really great spot for something to happen," explained Meg Streeter, a council member, "other than a vacant building or a hole in the ground."

The council formed a nonprofit, purchased the school for $1 and began renting out the space to tenants. A neighbor who had won prize money on the TV show "Sports Jeopardy!" even organized a business competition for the town with a $20,000 prize. Two of the winning proposals — a bakery and a personal fitness company — are now tenants of the Old School Community Center, which opened in 2013. Streeter said the former school's gym, in particular, has been an asset to the town. A pickleball club has started practicing there, and it's one of the few places in Wilmington large enough to host gatherings and events.

"The adaptive reuse of these buildings offers a way to re-foster that sense of community — and to reaffirm it." Ben Doyle tweet this

In Springfield, volunteers are hoping to repurpose the defunct North School, which closed its doors in 1984. Volunteers see the school's downtown location as an ideal spot for town gatherings.

Community-wide events often disappear when a school closes. In Wilmington, nonprofit and community groups can use the old school whenever they want, and for free. "Schools have this additional importance when they are revitalized," Gallagher said. "They once again become 'third spaces' as community centers or places of gathering," she added, using a term for social environments aside from work and home.

Old schools are also being used to address Vermont's chronic childcare shortage, which can be acutely felt in rural areas. Windsor County lacks childcare spots for six in 10 of the kids who need it, according to a 2021 Let's Grow Kids report.

In Bridgewater, a 2015 merger led the town to close the beloved Bridgewater Village School, which served grades pre-K through 6. In 2017, a group of residents came together to save the school from being demolished and turned it into a nonprofit community center, with a top priority of providing childcare. At the time, there was no licensed facility for babies or toddlers in the town.

Bridgewater Community Childcare opened in the old school in 2021. Program director Kristiana Birmingham said obtaining certification for the center was significantly easier than the process at other places she had worked. "The bones were already there for us," she explained. After only a year of service, Birmingham said she plans on expanding the operation to a second classroom, more than doubling her capacity from 14 to 36 children.

In Wilmington, the inclusion of a childcare company in the Old School Community Center has "been a game changer for the community," Streeter said.

Some old schools could help alleviate another crisis: Vermont's housing shortage. The dimensions of classrooms make the buildings ideal for single-unit and studio apartments, critical for filling the "missing middle" of housing stock. The layouts typically lend themselves well to cohousing and other forms of communal living.

One private developer, Frank Briscoe, thinks a former school in Brandon could ease the small town's need for missing middle housing. Surrounding Rutland County lacks enough rental property for all income levels, according to a 2021 housing needs assessment commissioned by the Housing Trust of Rutland County. The county's rental vacancies stood at 3.5 percent, under the 5 percent rate considered healthy.

Briscoe plans to redevelop Brandon High School, which closed its doors in 1981 and has remained empty since. The building has high ceilings and huge windows, elements that Briscoe said would make for light-filled, spacious units; tenants could work out in the former gym. The building is in the heart of downtown Brandon.

Briscoe, who specializes in architectural conservation, said he's received overwhelming support from the town, which approved his building permit. He plans to start construction in the spring and to move people in by the summer of 2024.

There's a place for below-market-rate housing, too, in these unused buildings. The Champlain Housing Trust has converted two school buildings in Swanton and one in St. Albans into subsidized housing.

In Rutland, the former Immaculate Heart of Mary School was transformed in 2021 into a mix of 19 one-bedroom and micro-units — apartments with less than 350 square feet of space — for low-income and formerly homeless residents in the area. The tight quarters are ideal for community members transitioning out of homelessness, who are often intimidated by large spaces, according to Mary Cohen, executive director for the Housing Trust of Rutland County. The gym was converted into a community space and café, which Cohen said has proven invaluable for community building.

But repurposing old schools comes with its own set of challenges. For one, historic buildings often require expensive upgrades and repairs. Plus, most buildings built before 1980 could contain toxic construction materials, such as PCBs. In some cases, such as Burlington High School, which sits abandoned, contamination makes rehabilitation cost-prohibitive.

While developers are required to institute an environmental review under the National Environmental Policy Act, PCB testing is not yet mandatory. The legislature is expected to decide how nonschool buildings should be regulated for PCBs. For now, though, the state's focus is on reworking functioning schools.

Adaptive reuse — as many architects coin it — is a well-known strategy for historical preservation. But local zoning regulations aren't always friendly to the concept. Gallagher estimates that only about half of all municipalities in the state have regs that readily accommodate new purposes.

Reimagining old schools requires a huge amount of volunteer time and resources. "It's a large commitment to take on a 33,000-square-foot high school building without the benefit of a school budget," admitted Schenkman of the Rochester High School Repurposing Committee. "We're sort of like the midwives for this whole thing," Ribaudo added.

And yet, volunteers continue to push forward. Streeter saw a real transformation in Wilmington when the old school was converted into a community center. Suddenly the building showed signs of life and turned into a resource for the community once more.

"Now, it looks like we care about our town," she said with pride.

"Particularly in our small towns, these schools really are the focal point of community," explained Ben Doyle, executive director of the Preservation Trust of Vermont. "There's a sense of loss and fear that comes up when these schools close. But the adaptive reuse of these buildings offers a way to re-foster that sense of community — and to reaffirm it."

The original print version of this article was headlined "After Schools"