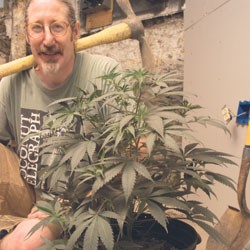 Myer manages Green Herbalist, which advertises in Seven Days as “Vermont’s only consultant on medical marijuana.” For the last two years, the business has assisted more than two dozen patients and caregivers on Vermont’s medical marijuana registry in growing and preparing their own “medicine.” Some even raise their plants in one of Green Herbalist’s two secure growing facilities.

Is Myer breaking the law? It’s unclear. The 52-year-old claims his attorneys have reviewed his business and determined it’s kosher. Myer says he’s also been up front with state and local police. As he puts it, “Nobody has said to me, ‘You can do this.’ But no one has said, ‘It’s illegal.’”

Myer, a former pharmacist, has been down that road, too; in November 2009, he was convicted of three counts of marijuana possession. That motivated the Vermont Board of Pharmacy, which had previously taken disciplinary action against Myer for “unprofessional conduct,” to suspend his pharmacy license indefinitely. Currently, he is not allowed to dispense drugs in Vermont.

Myer has found another way of helping patients — through an apparent loophole in the law. In 2004, the Vermont Legislature legalized medical cannabis for patients with specific ailments and symptoms, but the law didn’t specify how patients or their caregivers could obtain it.

Earlier this year, Gov. Peter Shumlin rectified that situation by signing into law Act 65, which permits up to four nonprofit medical marijuana dispensaries to open in the state. However, those dispensaries won’t be operational until July 2012; in fact, the Vermont Department of Public Safety, which will oversee them, has yet to draft the rules governing their operation.

Green Herbalist bridges the supply gap. Once a patient shows Myer a valid registry card, both parties sign a contract spelling out the terms and duration of a relationship, which varies from patient to patient. In some cases, Myer or his employees visit the patient’s home, then design and build a complete grow operation. Green Herbalist can also instruct patients on how to cultivate, harvest and prepare medicinal cannabis for consumption.

When patients are unable to grow marijuana themselves, state law allows them to designate a registered caregiver to do so. If patients don’t have a caregiver, Green Herbalist can set them up with one who cultivates and prepares the plants on their behalf.

“The contract is very specific,” Myer says. “If you don’t have the registry card, you can’t get anything.”

Some patients cannot, or choose not to, grow marijuana at home. They may lack the garden space, worry about burglars or live in federally subsidized housing that could be jeopardized by the discrepancy between state and federal drug laws.

For those patients, Green Herbalist provides off-site, locked grow rooms in which “caregivers” raise the plants on their own, then prepare them into an edible form. Myer says that all of his clients eat their cannabis rather than smoke it, because in that form it’s more potent and lasts longer. Once a grow room is leased, Myer says he has no involvement or contact with the plants inside.

Currently, Green Herbalist operates two grow facilities, in Lamoille and Caledonia counties, with a total of 12 individual locked rooms; plans are in the works to open a third in Rutland County, which would add another six rooms. Myer would not disclose the locations of the facilities because of past break-ins.

By law, a registry patient in Vermont may have no more than nine plants and two ounces of processed product. Using a master key, Myer periodically spot-checks to ensure that his “tenants” are staying within those limits.

“If they’re beyond nine plants, we’re done doing business,” he says, noting that it’s already happened three times. “I even had one kid come to me and say, ‘I want to grow two ounces a week and a hundred plants.’ And I said, ‘No. Our business is over.’”

Myer isn’t just a “consultant”; he says he’s also a patient on the state medical marijuana registry. In 2005, he broke his left arm in a bad skiing accident that almost resulted in an amputation. He says the opiate painkillers doctors prescribed put him in a “chemical coma” for six months. At the time, Myer claims, he had never tried marijuana. He’s since swapped prescription meds for pot; he uses marijuana every day to manage his chronic pain.

Myer’s registry status could not be independently confirmed because the state keeps the identities of all registry patients confidential. Likewise, Myer is unable to verify that his clients are legally registered.

He’s definitely operating in a gray area, according to Francis “Paco” Aumand III, who is director of the Division of Criminal Justice Services — the civilian arm of the Vermont Department of Public Safety, which oversees the state’s medical marijuana registry.

“There’s nothing in the law that prohibits someone from consulting,” says Aumand, who notes that he doesn’t have a law degree. “But I think he is walking a fine line.”

Aumand also questions whether having numerous patients growing under one roof constitutes “possession” by the property owner.

“Is there truly a landlord-tenant relationship that exists here?” he asks. “That’s one of the legal decisions that has to be interpreted.”

Despite Myer’s claim to the contrary, Lamoille County Sheriff Roger Marcoux Jr. says he did not know Green Herbalist was operating in his jurisdiction until he was contacted by Seven Days. Marcoux says the business, based on the description given, “bears investigation.”

His first concern is that Green Herbalist may be profiting from patients with end-stage cancer, multiple sclerosis, AIDS or other terminal diseases.

“If people take advantage of this” in a way that has Vermonters rethinking the law, “it’s going to ruin it for people who really need it,” Marcoux says. “That was not the intent of the folks down in the legislature who worked hard to get this through.”

If local police determine that Myer is breaking the law, it won’t be the first time. In September 2008, police discovered 19 pot plants at Chez Claudine, a Stowe restaurant owned by Myer’s then-wife, Claudine Myer. Police had previously discovered 27 plants on land the couple owned in Morrisville. On November 10, 2009, Myer pleaded no contest to three counts of misdemeanor possession. The license suspension came through a year later.

But Myer insists he’s not out to make a profit. He says most patients spend $12,000 to $15,000 a year on Green Herbalist’s services, which covers the cost of electricity, fertilizer and equipment. He tells clients at the outset a private grow room will cost them about $13,000 a year, he adds. In total, he estimates the costs work out to about $400 per ounce — roughly equivalent to the street value of high-quality pot.

“Most people we don’t even charge,” he insists. “I would say I’ve treated 12 patients in the last six months and not charged them one penny.”

In recent weeks, flyers have begun appearing on Burlington-area bulletin boards advertising classes on how to grow marijuana — for either medicinal or recreational purposes.

No, it isn’t a ploy by the Drug Enforcement Administration to nab would-be drug traffickers. The aptly named Budding Academy bills itself as “the nation’s number one source of cannabis education.” Hyperbole notwithstanding, the school was founded two months ago by Ray Larkin, a 30-year-old entrepreneur from Providence, R.I., who previously ran a bartending school called On the Rocks.

As Larkin explains, Budding Academy offers two 12-hour courses: an introductory and an advanced class, which collectively cover the entire growing process, from seeds to buds. The classes also touch on the history and science of the cannabis plant, growth prospects for the industry, and other legal, political and medicinal issues.

Both classes include a safety program on the drug’s mind-altering properties. Called “BudSmarts,” it covers dosages, intoxication and pot’s effects on the human body.

Though Budding Academy is still in seedling form — Larkin admits no classes have actually been taught yet — the school has a very slick website that, among other things, promises students will acquire “a unique education that can possibly ‘pay for itself’ several times over.”

Is Larkin high? Probably, but that hasn’t stopped him from offering his pot-cultivation courses in Rhode Island and California, as well, with additional classes planned for Colorado, Oregon and Washington state. In Providence, Larkin placed a classified ad looking for experienced growers to work as instructors and got nearly 100 responses. Many had been growing for decades, and some had advanced botany degrees, he claims.

Larkin seems unconcerned that marijuana hasn’t yet been legalized in Vermont.

“We feel that it will probably go in that direction,” he says, and adds that “when it comes right down to it, we’re not breaking any law” because the classes won’t be using actual cannabis plants, only substitutes with a close resemblance. Counterculture meets continuing ed.

The beginner class in Vermont is tentatively scheduled for October 1 and 2; advanced classes for October 15 and 16. However, Larkin may change those dates to coincide with the Bern Gallery’s annual glass-pipe-making competition in Burlington.