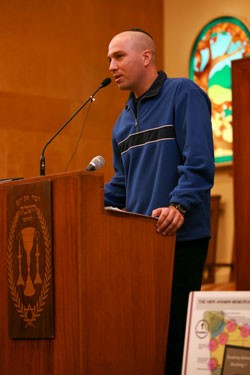 BURLINGTON — The conflict between Israel and Palestine has defined and taken lives on both sides for 60 years now. With opposition that passionate and unyielding, the simple act of crossing lines to communicate can constitute treason. Yonatan Shapira, an ex-Israeli Air Force helicopter pilot, discovered this two years ago when a superior at the helicopter charter company where he worked found out Shapira was a refusenik — a member of the armed forces who refused to serve on missions he considered morally questionable. Perhaps worse, Shapira was not ashamed of initiating contact with Arab residents in the Palestinian territories.

“I was fired immediately,” he said matter-of-factly last Sunday afternoon at Ohavi Zedek Synagogue in Burlington. “There used to be an old joke that said, ‘In any room with two Jews, you’re going to get three opinions.’ Now it seems that, in a room with 100 Jews, there is only one opinion, and that is that Palestinians will be our enemy forever.”

Shapira would like to change that, and so would former Palestinian fighter Bassam Aramin. That’s why the two men helped found Combatants for Peace, along with other ex-militants, and are currently sharing their message of peace on a speaking tour of the U.S. The organization’s tenets are fourfold: the rejection of the tactic of conflict resolution through violence; the end of Israeli occupation of Palestinian territories; the establishment of a Palestinian state; and the determination to use only non-violent means to accomplish these goals.

At Ohavi Zedek, Shapira and Aramin sat before a rapt audience of 150 Jews, Muslims, Christians and non-theists. Their presentation, sponsored by Combatants for Peace (www.combatantsforpeace.org) and moderated by Rabbi Joshua Chasan, was the latest in a nationwide series of speaking engagements intended to educate Americans about the conflict.

After losing his 10-year-old daughter, Abir, to an Israeli rubber bullet a decade ago, Aramin would seem to have more reason than most to embrace the perpetuity of hate. Instead, this 39-year-old father of five, who spent seven years in jail for planning an attack against occupation soldiers in the late 1980s, turned his grief outward, and joined forces with Shapira to replace political rhetoric with more fundamental goals.

“Combatants for Peace was founded upon the assumption that simply speaking to each other . . . to learn about each other’s lives and struggles and the pain we inflict wasn’t just better than violence,” Aramin offered. “It was the only way out of violence, and I knew that it was one of the best ways to honor my daughter.”

Shapira’s commitment to peace cost him his position as a pilot in the Israel Defense Forces. After refusing to fly “assassination runs,” he encouraged other members of the armed forces to do the same, and was instrumental in creating the “Pilots Letter” of 2003. That letter, signed by 27 other officers, stated that they refused to “. . . continue to harm innocent civilians. These actions are illegal and immoral, and are a direct result of the ongoing occupation which is corrupting all of Israeli society.”

“And that’s just the point,” Shapira told the packed congregation. “The occupation, whether it is direct or in the form of hundreds of checkpoints that humiliate the people there . . . that is the enemy. All our Jewish values are based in a love for liberty, and how can we embrace that when we occupy another’s land?”

Both men were quick to sidestep the inevitable political questions surrounding a solution to the crisis, stopping at an acknowledgment that a “two-state” resolution is the best of many tough options. This drew a question from Rabbi Chasan, who wanted to ensure that the goal of ending the occupation means redrawing the borders to those of the 1967 state, and not the borders as they existed before Israel was founded in 1947. Both Aramin and Shapira agreed that the former was their aim.

Combatants for Peace has its share of detractors, including organizations such as StandWithUs and former U.S. military intelligence officer-turned-columnist Jerry Gordon, who accuse the group of being too quick to blame Israel for the violence in the region. But the Burlington audience members remained polite. Most expressed gratitude for the message of peace, although, after Shapira suggested that part of the ongoing problem in the Middle East is establishing “any national identity, let alone government, along religious lines,” a listener quickly stood up.

“I respect your message, but we have to accept that in a region with Palestinian territories just a few miles, and in some cases just a few yards, from Israeli settlements, how would we ensure the safety of the Jewish people without [occupation] checkpoints?”

“There are more than 450 checkpoints in the West Bank territories alone,” Aramin responded. “You can’t go to work, to the store or to visit friends without checkpoint after checkpoint. What they mean to us is slavery.”

“They are a constant reminder to the people that they are not free,” Shapira added. “It might be time to wonder if they are creating more violence than they are deterring.”

A young woman asked what the panel thought of recent efforts by the Bush administration to broker a deal between the two sides, and Shapira barely suppressed a laugh as he responded.

“When you consider that the violence we are discussing, though terrible, is tiny compared to the atrocities being committed against the Iraqi people by the United States, you’ll forgive me if I’m not too optimistic about [Bush’s] sincerity. What I imagine [the administration’s] goal is, is to perpetuate the current state of occupation anyway, and that isn’t acceptable.”

Aramin added that what he wanted was to see “a new generation of children . . . raised with less violence . . . without occupation in a two-state region,” he said. “If the present situation continues, then I see little hope.”

At this, Shapira quickly added, “But hope can arise in unexpected ways.” He was referring to a ruling by the Israeli Supreme Court in September 2007 that directed the military to re-route a separation wall off Palestinian land.

“It was a small decision in the grand scheme of things,” Shapira admitted. “But it had an amazing effect. It showed to the Palestinian people that someone was listening, and it restored their faith in a dialogue, even if only for a moment. We can’t underestimate the curing power of hope.”

The Combatants for Peace tour extends through the end of February, traveling next to Maryland, then Washington, D.C., and finishing with nine stops in California. Smiling as if in wonder at this breakneck pace, Rabbi Chasan asked, “And what do you do for day jobs?”

Aramin grinned as he looked at his family sitting in the front row. “I work in the archive office of the Palestinian Authority,” he said. “But being a father of five . . . that’s my job.”