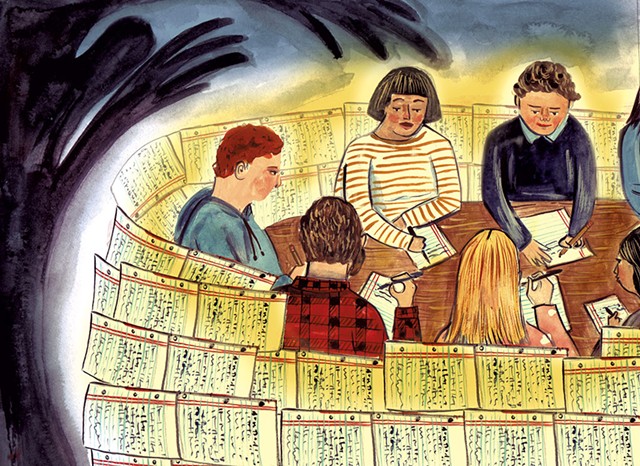 This past Christmas, Jack Gower, 28, celebrated one year of sobriety. In Vermont, writing is helping the Florida transplant stay that way. "Having a creative outlet is crucial for recovery," he says.

Gower found his outlet with Writers for Recovery at Burlington's Turning Point Center. His dad, John, is a workshop participant, too, and introduced his son to the group after Jack moved here from St. Petersburg a year and a half ago.

The workshop for recovering addicts began as filmmaker and social activist Bess O'Brien of Kingdom County Productions wrapped her documentary The Hungry Heart. The 2013 film provides a window into the world of prescription drug and opiate addiction by following the work of Dr. Fred Holmes, a St. Albans pediatrician.

"I wanted to do one more thing in St. Albans: to gather stories," O'Brien says. So, in summer 2013, she and Holmes organized a workshop at Turning Point of Franklin County. Initially, they brought in professionals in photography, radio, visual art and writing to work with recovering addicts.

For later workshops, O'Brien shifted the focus to just writing. Why? "All you need is a pencil and paper," she points out.

Montpelier author (and Seven Days contributing writer) Gary Lee Miller taught in that first St. Albans workshop. At the end of its 10-week run, he and O'Brien weren't ready to call it quits. "They took to it like fish to water," O'Brien says, "and it was a wonderful experience, so I wanted to continue that."

After the filmmaker secured more funding, Miller returned in summer 2014 to lead what began as another 10-week writing workshop, this time at Turning Point Center of Chittenden County in Burlington. That group has continued meeting to this day.

Since then, O'Brien and Miller have organized five more workshops in recovery centers and correctional facilities all over the state. Participants in all five have just compiled a collective debut anthology of poems and short fiction, titled One Imagined Word at a Time, due out this month.

With new funding from the Rona Jaffe Foundation, Burlington Labs and the Vermont Department of Corrections, among others, O'Brien and Miller will offer close to 10 different workshops this year.

The structure of the Writers for Recovery workshops is simple. They are open to individuals recovering from any addiction, as well as to affected family members or friends. Writing experience is irrelevant; it's a "come as you are" operation. While Miller often brings in reading material or invites Vermont authors to speak, most of the workshop is spent — no surprise here — just writing.

Miller offers participants prompts and gives them seven minutes to respond. Why seven minutes? "There's no time to think or worry that you're doing it wrong," he says. "It gives them freedom.

"The first prompt we do is called 'I am from' — it's a good way for people to introduce themselves," Miller continues. "They talk about their past and get to know each other." Other prompts have included "A morning in addiction," "All I remember from that night," and "Dear ___, here's what I want you to know about my addiction."

Not only does the seven-minute time limit eliminate the natural tendency to self-edit, but it also accelerates relationship building among participants. "We're really challenging people," Miller says, "and the culture of the group helps them take chances and say the shit that's really bothering them, that they need to say. It can take a while to build that culture," he adds, "but when you're sharing your writing back and forth, it can happen really fast."

Miller notes that his writers tell stories in the group that they've never revealed to anyone before. "People talk about the horrible things they did, as well as the horrible things that were done to them," he says. "It's a real bonding experience, which is part of the reason I haven't left."

The workshops culminate in a public reading. "That's one of the best things — it's a big deal for them to get up and read." Miller says.

Gower, who says he struggles with anxiety, can attest to that. "I read a couple of times in [Writers for Recovery], and it gave me the chance to overcome that anxiety," he says.

Another workshop participant, who prefers to be identified only as Caitlin, says she still gets nervous when she gets up to read. But she sees doing so as a service both to herself and to her fellow writers. Caitlin has been sober for more than four years. The New Hampshire native worked as a nurse for 18 years, until her license was revoked because of behaviors stemming from her drug addiction. She's been attending the Burlington workshop for almost a year.

"When I get up and talk about my personal story with recovery, it helps so many other people," Caitlin says. "It gives them hope."

That's a hard sentiment to come by, given that addiction, depression and severe anxiety often go hand in hand. Caitlin's poem "Dear Addiction" is included in the group's anthology. In it she writes: "Perfection is not possible, but progress feels good."

Her poem acknowledges the constant pull of addiction and the strength it takes not just to overcome it but to live with it. "Progress is no longer being sent to the hospital because I'm having seizures or I've overdosed," Caitlin says. "Progress is that my children want to have a relationship with me; I have a job where I'm trusted. I'm not suicidal. I have hope."

Writers for Recovery workshops aren't a replacement for other services. Both Gower and Caitlin participate in a 12-step program. Gower also goes to free yoga classes offered by Burlington's Turning Point Center.

"There are so many ways of moving through recovery," O'Brien says. "This [workshop] is just another way of getting to that place of reflecting on who you were and who you are now."

"Once we saw the quality of the work," she notes, "we thought, Wow, this needs an audience." The result was the anthology, which will have a release party on Saturday, January 23, at the Flying Stage in Barre. O'Brien and Miller aren't the only ones impressed by the writers' output: Four poems by three workshop participants appear in the current issue of New York-based literary journal Epiphany.

Miller and O'Brien remain committed to the workshops — and excited about increasing their numbers. As Miller puts it, "The only word we're hearing going forward is 'yes.'"

Why I Write for My Recovery

Remember when you were very young lying alone in a field or park and the clouds overhead somehow resonated in an idle sort of way with images and stories deep within your soul? Of course it was silly, but it still mattered, and mattered deeply. Writing for recovery is connecting with that very important silliness. Before we learned how not to be, it never occurred to us that we weren't wonderful. Writing for recovery gives us play and gives us heart. It suspends in midair the possibility of what might happen next. This unleashing of uncertainty moves us across the high wire, where balance only comes from moving the story along. One word followed by the next, we move our wonderful life forward while the crowd looks on in awe, and balance comes not by looking down or back, but from imagining where you're going next. Writing for recovery is recovering your balance. It's moving your life forward, one imagined word at a time.

To learn more about Writers for Recovery or reserve a book, contact Bess O'Brien or Gary Lee Miller at writersforrecovery@icloud.com

The original print version of this article was headlined "Write On"