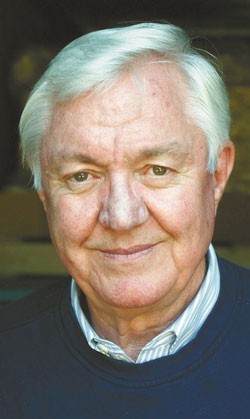 The issue of race in the 2008 presidential election will either be a toxin that infects the body politic, or a tonic that heals centuries-old wounds. But once the votes have been tallied, it’ll be difficult to determine whether the “toxin” or “tonic” prevailed, because many Americans won’t own up to how racial bias influenced their votes.

On Thursday night, Dunsmore will put the issue of race and electoral politics into a broader historical context in a talk entitled, “Race in the Presidential Election: Transcendent or Still Toxic?” The September 25 event at Montpelier High School is the first in a series of fundraisers for the Central Vermont Anti-Racism Study Circles (CVARSC), an ongoing, statewide effort to combat racism in Vermont.

Dunsmore spent much of his career reporting from bureaus in Paris, London, Rome and Beirut. In recent years, he’s been a regular columnist for the Rutland Herald/Montpelier Times-Argus and an occasional commentator on Vermont Public Radio. Dunsmore admits he’s no expert on race relations, and while he traveled extensively with seven U.S. presidents — from Lyndon Johnson to Bill Clinton — he was never on the campaign trail with them.

Nevertheless, the veteran journalist knows how to read between the lines of what politicians and journalists say — or, more often, don’t say — about race. In the 2008 campaign, Dunsmore has noted “covert” or “coded” references to race that tap into the historic and deep-seated fears of many white, working-class Americans.

“I, for one, will feel that if Obama should lose this election — and that seems well within the range of possibility, given the way things are at the moment — that race will have been a factor,” he said.

Dunsmore points to the way Republicans are trying to paint Obama as an elitist and a celebrity who’s out of touch with ordinary Americans. “My immediate reaction to those allegations,” Dunsmore explained, “is that what they’re really saying is, ‘He’s an uppity black.’”

Dunsmore is not saying that Americans who vote for McCain will do so because they’re racists. However, gathering statistical data on how much race is a factor in this election will be difficult. Historically, polling about black candidates has been skewed by voters’ reluctance to admit their own racist biases — a phenomenon known as the “Bradley effect.” The term refers to a tendency among white voters to tell pollsters they are undecided or leaning toward a black candidate to avoid appearing racially biased. Tom Bradley, an African-American, lost the 1982 California governor’s race despite being ahead in the polls.

Despite a self-confessed support for Obama, Dunsmore insists that subtle, and not so subtle, references to race are evident not only in the message from Republicans, but from Democrats and some in the mainstream media.

For instance, in the final weeks of Hillary Clinton’s bid for the Democratic nomination, members of her staff, as well as some journalists, reported that she had strong support among white, working-class people without college educations who made less than $50,000 a year.

“The next sentence could have been, ‘who historically have been suspicious and afraid of black people,’” Dunsmore said. “But you can’t really say that unless you really know that.”

Dunsmore is not alone in making such allegations. As The Nation reported in January, major newspaper reports on the leading Democratic candidates in the first 10 months of the campaign referred to Obama’s Harvard law degree 178 times — nearly six times more than the 30 references to Clinton’s degree from Yale.

Such references lend credibility to the idea that Obama is a member of a privileged elite who’s benefited from affirmative-action programs and got where he is only because he is black.

Why should Vermont, one of the whitest states in the nation and whose voters have supported Democratic presidential contenders since 1964, care about this issue? As Robert Appel with the CVARSC points out, whoever occupies the White House in 2009 will shape civil-rights programs for years to come.

Speaking as a member of the study circles — and not in his capacity as executive director of the Vermont Human Rights Commission — Appel points out that the Bush administration has moved philosophically away from civil-rights issues by gutting the civil-rights division of the U.S. Department of Justice, which enforces the Civil Rights and Voting Rights acts of 1965.

The justice department has also made drastic cuts in grants for criminal-justice programs, such as community policing. Community policing is often credited with reducing racial tensions between police and minorities. During the Bush years, Appel said, that focus has “gone in a wholly other direction.”

“Race plays out in everyday decisions in all sorts of facets of life, and many people are blissfully unaware of that dynamic,” Appel added. “Obviously, having an African-American man running in a presidential election — and doing quite well — would prompt some further analysis of race and racism in this country. And we thought Barrie would be a good person to speak to that.”

Barrie Dunsmore's "Race in the Presidential Election: Transcendent or Still Toxic?" will be held on Thursday, September 25, at 7 p.m. in the Montpelier High School. Auditorium. Info, 229-2340.