Theater review: Peter Pan, or The Boy Who Would Not Grow Up

You know when you try to retell a dream you’ve had, and all the details suddenly seem absurd? That’s what it feels like to watch a play you haven’t seen since childhood. Watching Peter Pan, for instance, you start seeing the Darling family as slightly deranged. You realize that it might not be so fun to be a girl in Neverland. You recognize how weird it is to be an adult, but how sad it would be never to grow up.

In a “Fresh Air” interview that aired last week to commemorate Maurice Sendak’s death, the legendary children’s author recalled seeing a production of Peter Pan as a child. “I detested it,” he said. “This was a conceit that could only occur in the mind of a very sentimental writer, that any child would want to remain in childhood. It’s not possible. The wish is to get out.”

Sendak might have appreciated the Saints & Poets Production Company version of the classic tale, which hews closer to J.M. Barrie’s original story than does the musical version. It’s darker and stranger. This nonmusical production, adapted by John Caird and Trevor Nunn, is intended for all-ages audiences, and plays through next weekend at Burlington’s Main Street Landing Black Box Theatre.

What the play lacks in musical numbers and flying harnesses, it makes up for with Saints & Poets’ signature puppets designed by director and coproducer Kevin Christopher. The Darling family’s dog, Nana, is a multisegment, lion-size wooden puppet on wheels, which rumble deeply whenever Nicole Grubman rolls her into a scene. Mermaids are made from Barbie-size dolls on sticks. The Never Bird is a dreamy, white, feathery thing, which a puppeteer holds aloft on a stick while dragging a skateboard fashioned into an egg-filled nest.

The Darlings are a peculiar family. Mary Darling (Patricia Julien) is dainty and doting, yet oddly at ease leaving her beloved children in the care of a dog. When she spots a strange boy lurking in the window of her children’s bedroom, she is startled but not terribly concerned. Like a good sleuth, she holds on to the evidence: his shadow.

“He’s no one I know, but he does look a scoundrel,” says George Darling (Don Loeb), examining the black, boy-shaped shred of fabric. Mr. Darling is even odder and more childlike than his wife. He sulks when he has to take his medicine. And after his children fly off to Neverland, he begins sleeping in Nana’s kennel, eating from her bowl and, bizarrely, experiencing great professional success.

More comic relief comes in the form of Seth Jarvis as Liza, the Darling’s maid. Dressed in a long skirt, floral apron and billowy cap, he bounces a pipe between his lips and does nothing to soften his booming voice.

Eva Espenshade is adorable as Wendy, striking the perfect balance between maternal English schoolmarm and wide-eyed little girl. In many ways, she gets the short end of this adventure in Neverland: She’s enlisted to mother the unruly Lost Boys, unwittingly dragged into a love triangle with Peter Pan and Tinker Bell, and nearly killed multiple times.

Isabelle Fenn is a delightful Peter Pan, alternately charming — while wooing Wendy to Neverland — and brooding, as he begins to resent her mothering and her nagging attempts to define their relationship. “It’s only pretend that I’m their father, right?” Peter asks Wendy while the Lost Boys feast on an imaginary supper. When Wendy tells a bedtime story about mothers leaving their windows open in case their children return, Peter loses his cool.

“You’re wrong about mothers,” he shouts. Peter tried to go home years ago, but there were bars on the windows and another boy in his bed.

There’s a darkness about Peter, who tries to console himself later, as the tide threatens to drown him in the mermaid lagoon. “To die would be an awfully big adventure,” he says. When Wendy, John and Michael leave him, Peter hyperventilates. “There’s a saying in Neverland that every time you breathe, a grown-up dies,” explains the narrator.

Peter’s not the only one to take a homicidal turn. Cael Barkman makes a sassy and vindictive Tinker Bell, who huffs and puffs and fluffs up her sparkly tulle skirt whenever she catches Peter giving Wendy attention — and later attempts to murder her.

On-stage flying is usually the hallmark of a Peter Pan production, so it’s a bit of a letdown that the Saints & Poets version lacks harnesses. Instead, Peter and the Darling kids wave long sticks topped with miniature puppet versions of themselves as they stand in a cluster below. It’s cute and creative — but some of the thrill is gone.

Still, they make it to Neverland. “We have all been there,” says narrator Kim Jordan, with big eyes and an unwavering smile. “We can still hear the sound of the surf, but we shall never return.”

The Neverland set, designed by Aliyana Gewirtzman, is all ladders, rope railings and playground-type towers, which serve as the Lost Boys’ underground fort. Played by adults, these boys look like scruffy prep-school rogues in knee-high Argyle socks, long shorts, button-down shirts and striped ties. The same actors transform into the pirates by donning hats, bandanas and hoop earrings.

And then there’s Captain James Hook, whom Marianne DiMascio infuses with delicious angst. The one-handed villain is tormented not just by the ticking crocodile that made off with his hand — the beast is another wooden creation carried by two puppeteers, one wearing tap shoes — but by inner demons. “No little children love me,” Hook laments.

The biggest heartbreak comes at the end. When Peter returns for Wendy a year after the main action — taking her to Neverland for a week so she can do his spring cleaning — he has already forgotten some of the adventures they had together. He forgets Captain Hook and Tinker Bell. Then, the next year, he forgets to show up at the Darlings’ altogether.

When Wendy is a grown-up with a daughter of her own, Peter returns. “And thus it will go on,” the narrator explains, “so long as children are young and innocent and heartless.”

Harsh words for the little ones — but none of the kids in the audience seemed to mind. 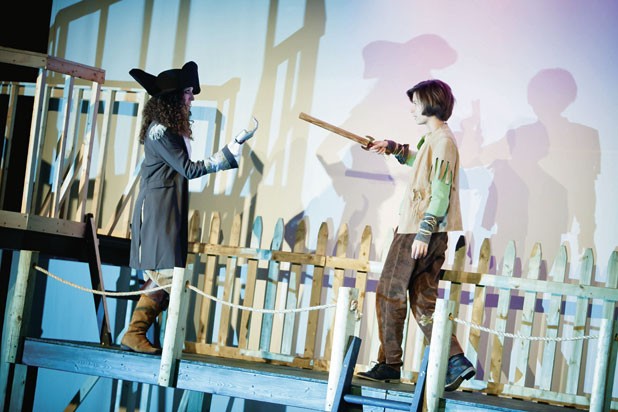