Foraging Flowers for a Sweet Taste of Spring 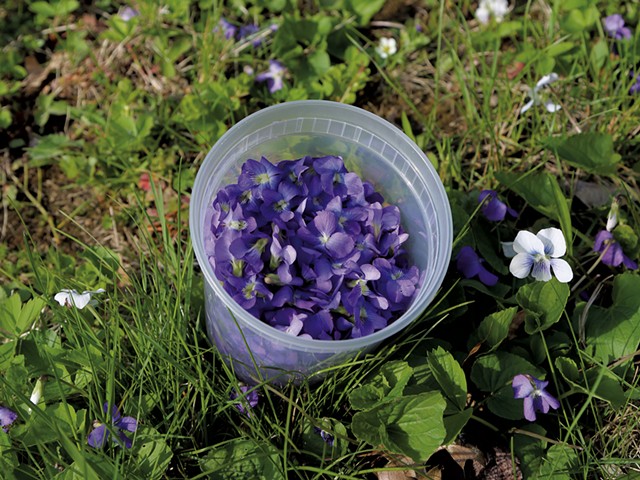 'Tis the season for ramps and fiddleheads. After the (hopefully) last snowstorm of the year in late April, both of those popular wild foods began popping up on restaurant menus, at farmers markets and on social media around Vermont.

There's growing concern, however, about the sustainability of gathering these green signs of spring. Ramps are especially susceptible to overharvesting, and picking the entire plant — or plucking too many from a patch — can prevent them from returning the following year.

Foragers have long protected the locations of their favorite woodland patches of the garlicky wild leeks and fiddlehead ferns. Now, some are forgoing them altogether. Instead, they're turning their attention to the bright, plentiful flowers such as dandelions and violets scattered throughout fields, lawns and forest edges.

"They're wild, they're weedy and they're abundant," said herbalist and former chef Rachael Keener. She's the owner of ALKAME CO, a Burlington-based elixir and herbal tonic company — and is one of those foragers who's stopped seeking out ramps and fiddleheads. 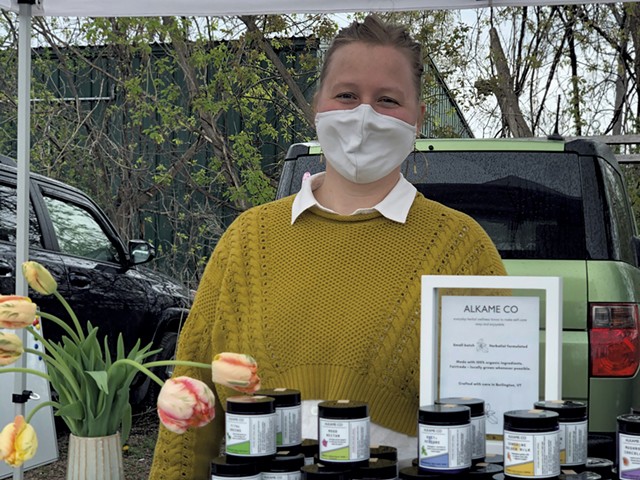 "I love both of those plants, but I worry about them being over-foraged," Keener explained. "Most of the time, when you pick a flower, that plant really wants to reproduce, so it's going to send out more flowers."

Violets are a particular favorite for Keener; she used them to craft crème de violet popsicles for her previous business, Joy Ride Pops.

"All plants kind of have their energies or their folklore about them," Keener said. "You don't even have to be that woo-woo to look at violets and see that they have this sprightly, sweet energy. They're fairy flowers."

Wild violets are easy to identify, even for beginning foragers. The purplish-blue blooms — there are also white and yellow varieties — grow low to the ground, surrounded by heart-shaped leaves.

Folk herbalism's doctrine of signatures says that a plant's appearance is a clue to its effect on the body. Keener takes that with a grain of salt, but she considers it a fun way to relate to plants. In the case of violets, the clue is in the heart-shaped leaves.

"One of the first things I think of when I think about violets is what they do for the heart — the emotional heart," Keener said. "They bring sweetness, and they're soothing. That makes them good for grief, worry and anxiety."

Besides their playful appearance, the flowers have cooling properties and are demulcent, or slimy, which makes them useful for treating inflammation and heat topically.

"Think about that emotionally," Keener said. "Anxiety, stress — that's a manifestation of heat in our nervous system, in our heart."

Violets like to grow on the edge of wooded areas and in the woods themselves, but they also pop up in fields and backyards. Keener advises would-be flower foragers to harvest only from places that aren't treated or sprayed with chemical pesticides or herbicides; to test backyard soil for lead; and to avoid trailside patches, where flowers might be contaminated with dog urine.

It's a good rule of thumb to pick only 25 percent of the flowers from each patch. In early spring, it's best to leave the flowers as a food source for bees and other pollinators. But as trees, dandelions and other flowers start to bloom, pollinators mostly move on from the violets. The flowers typically continue blooming through early June. 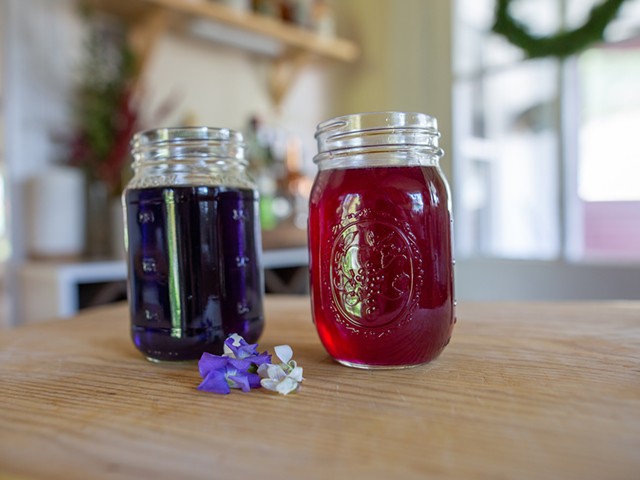 Violet leaves are edible and make a nice addition to a spring salad. The flowers themselves have many culinary uses: Violet jam and treats topped with violet sugar are classic springtime delights. Candying violets is time-consuming, but the finished product makes for an especially whimsical cake decoration.

The easiest way to embrace violets' fairylike magic is to make violet syrup. (Find the recipe in the latest Home on the Range.) Pouring hot water over the petals and letting them steep for 24 hours results in a vibrant blue liquid. Combined with sugar or honey, it makes a nectarous, floral syrup that can be used in cocktails and sweets. And if you add a squeeze of lemon juice, the color transforms to a bright magenta. Keener likes to add it to seltzer with a splash of cream for a seasonal cream soda.

If foraging flowers and making syrups doesn't appeal, don't worry. Several local businesses are selling violet products this spring, including doughnuts from Miss Weinerz and flower-coated, dairy-free fudgesicles from Curly Girl Pops. But for those who dare to DIY, foraging for flowers is a great way to connect with the natural world — and to slow down and enjoy the season.

"It's easy to be extractive," Keener said. "So I love the things in the process that actually take a lot of time and attention and intention. It puts the brakes on a little bit." 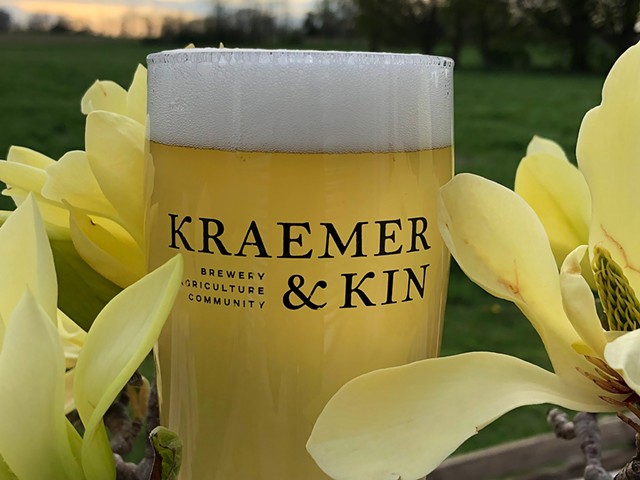 Flowers are unconventional beer ingredients. But at Grand Isle's Kraemer & Kin, magnolias and dandelions are as likely as hops and malt to show up in the brew kettle.

"We try to bring our love of naturalism and fascination with the forest and flora to our brewing," co-owner Heather Kraemer said. "We use flowers, stuff from our gardens and things that we're purchasing from local farmers."

Kraemer & Kin released its magnolia sour the second weekend in May, and a dandelion sour is in the works. Both are part of the brewery's annual summerlong Sour Flower series.

Brewing with flowers is a delicate process, Kraemer explained, as immersing buds and blooms in hot liquid for too long can overwhelm their flavor. The payoff, though, is a floral, earthy, sometimes citrusy aroma and flavor.

"Even the mouthfeel is delicate," she said.

When brewing with magnolias earlier this spring, the brewery used the entire flower bud, keeping them whole and immersing them gently using a large steeping bag.

"We found that when the magnolia buds are masticated or crushed, the bitterness really comes out," Kraemer noted. "So it was a very light process, trying to capture the sweet and floral parts without imparting bitterness."

Kraemer & Kin also brewed a sour with dandelions last year, picking more than 1,000 flowers from unsprayed, carefully selected growing environments. After harvesting the dandelions, they separated the petals from the green base of the flower head; the base has vegetal characteristics that they don't want to carry through into the beer.

This year's batch is currently in progress — after brewing, the kettle sour rests a few days before the flowers are harvested and added. Kraemer estimated that the batch will be released sometime in the next few weeks, depending on how the beer matures.

Each Sour Flower batch from the brewery's 3.5-barrel brew system is roughly 100 gallons. Bloom-seeking drinkers can try the beers on draft at Kraemer & Kin's tasting room at GreenTARA Space in North Hero Friday through Sunday or look for cans at local retail outlets.

The original print version of this article was headlined "Roses Are Red, Violets Are Tasty | Foraging flowers for a sweet taste of spring"