For Vermont's Elders, the Hardest Phase of the Pandemic Is Still to Come | Coronavirus | Seven Days | Vermont's Independent Voice

For Vermont's Elders, the Hardest Phase of the Pandemic Is Still to Come 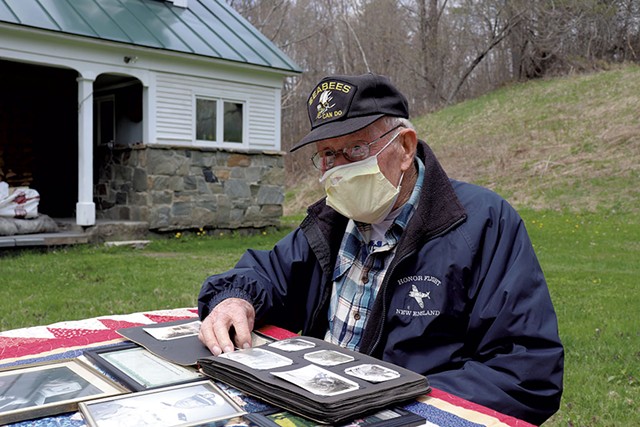 The pandemic can seem very distant from the long dirt road in Cavendish where James J. Hasson lives. But it is shaping every day of the 94-year-old man's life.

Hasson has lived in this tucked-away wedge of southern Vermont since 1947, in a white clapboard house that abuts the Knapp Brook Wildlife Management Area, bounded by woods and the namesake stream.

Before the new coronavirus found its way to Vermont, Hasson treasured his regular trips to the Thompson Senior Center in Woodstock to eat lunch with friends, as well as his shifts as a docent at the Old Constitution House in Windsor. In the last two months, he's started up his Toyota truck just twice — once to be sure the engine still turned over, and a second time to fill it with gas.

Without television or internet, Hasson and his 67-year-old son James D. Hasson, who lives with him, have few ways to pass the time. And there's no end in sight.

"I can see something like this going on for years," the elder Hasson said. "I dread the thought of it."

A two-month stay-at-home order has managed to limit the virus' initial spread in Vermont, but COVID-19 will remain a continuing threat as the lockdown is gradually lifted.

On May 6, Gov. Phil Scott allowed residents to resume small social gatherings between "trusted households." The reprieve doesn't apply to older adults or those with certain medical conditions, groups that have accounted for the vast majority of pandemic deaths around the globe. "They should continue to shelter in place," the governor's order reads, "and family and friends should do everything they can to help keep them safe."

The move marked a new phase of the pandemic response in which isolation ceases to be a shared experience. While many Vermonters will rejoin society in the coming weeks, the state's elders will be forced to navigate a period that is even more treacherous, and potentially even lonelier, than the one they've just endured. Some worry their needs may get lost in the push to reopen businesses and repair a damaged economy.

"There's a real fear that older Vermonters are going to be left behind," said Ruby Baker, executive director of the Community of Vermont Elders, an advocacy group, "that all of these changes are going to start happening and the world is going to move forward without them."

Weeks of lockdown have already presented a slate of difficulties in a state that has one of the highest percentages of residents age 65 and older in the country. Senior centers and adult day centers were ordered closed, while the demand for home-delivered meals has spiked dramatically. In-home services such as laundry and cleaning have been reduced. Scams that target the elderly proliferate.

Area Agencies on Aging have adapted during the crisis, aided by an influx of volunteers. Age Well, which provides Meals on Wheels and coordinates senior services in northwestern Vermont, said it served roughly 40 percent more home-delivered meals last month than in April 2019. The Southwestern Vermont Council on Aging set up a volunteer grocery shopper program. Some senior centers, including the Thompson Senior Center, have offered virtual classes or bingo games over the phone.

The Woodstock-based center also set up a curbside meal-pickup service for older adults who enjoy the excuse to leave their houses. Besides distributing more than 30 meals each day, employees hand out puzzles and donate copies of local newspapers.

"People are just really tired of being at home and not able to do the things they want to do," executive director Deanna Jones said. "We're trying to keep people's spirits up."

The virus has presented an unsettling new trial for Hasson, a retired plumber who signed up for the Navy's construction battalion, the Seabees, as a teenager during World War II.

A mask-clad Hasson described his lifetime of service during an interview last week at his backyard picnic table, where he'd laid out photos from his time in the military for his visitor.

Five of his childhood friends died during the war, Hasson recalled as he flipped through the pages of a photo album. After he returned from his service in the Pacific, Hasson said, he made a point to visit his deceased friends' mothers. He later served again, in Vietnam, at age 43.

Hasson said he wishes he could aid the coronavirus response, but "I don't dare leave the house."

"It's been such a waste," he said of spending the past eight weeks on lockdown.

Hasson said the Thompson Senior Center has delivered him four meals each week, and the Reading-West Windsor Food Shelf drops off groceries. He also gets daily check-in calls from one of the senior center's employees, which he finds especially rewarding.

"The people calling in are the only riches I have left. I just cherish these phone calls," he said. "They recognize you're a human being."

Social isolation was a challenge for Vermont's rural seniors before the pandemic, said Janet Hunt, executive director for the Vermont Association of Area Agencies on Aging, a nonprofit trade group. She started a task force last fall to begin tackling the problem, which has only become more complicated since.

State officials have already said that long-term care facilities, where residents have been unable to receive visits from family members since March, will be among the last places to relax visitation restrictions. No one knows when senior centers and adult day programs will resume in-person services or what those will look like. Some offerings may continue online but will be limited by patchy broadband and technology access around the state.

The coronavirus is also exacerbating a caregiving shortage that has plagued the state in recent years. Callers to the Southwestern Vermont Council on Aging's help line have reported losing homemaking supports such as laundry and cleaning, aging services directors Dana McMahon and Jennifer Plouffe said.

"Technology doesn't fix everything," McMahon said. "There's the need for people to come into the home and assist with a task."

Some supports for seniors rely on volunteers — who are often older adults themselves. Jones said more than 60 percent of the Thompson Senior Center's volunteers are older than 70. Many of those volunteers have been forced to isolate themselves since March.

Younger people have filled the gap — "one glimmer of hope" to come from the pandemic, Hunt said. Others worry that such volunteerism won't continue once younger people return to work.

Advocates see the weeks ahead as a pivotal period. On one hand, it's an opportunity for the state to renew its commitment to making Vermont a safe place to age, but it's also a dangerous moment that could leave older adults more isolated than ever.

"There may never be a time where older adults feel comfortable participating in society the same way they did," Baker said. "The more we are thinking about what the world should look like, how we should respond best, we need to make sure that older adults and family caregivers are at the table."

If communities fail to do so, they will also lose out on older adults' contributions. Helen Beattie, 65, recently retired from UP for Learning, the education nonprofit she founded. The East Hardwick resident has spent her weeks in quarantine organizing a volunteer mask production and distribution program. Her team of more than 20 volunteer sewers delivered 500 masks within the last two weeks, with plans for at least a thousand more.

Beattie said she and her husband will be "very conservative" in the months ahead, wearing masks in public, avoiding public forums and forgoing trips to see their out-of-state children in favor of camping locally. In the meantime, Beattie wants to help promote mask use in the face of "predictable resistance to using them."

"I feel responsible and feel excited about figuring out how we send that message in a way that motivates people to wear them," she said.

In Cavendish, Hasson is also hoping for a cultural shift. "There might be some good to come out of this thing," he said. "It will show people what's really valuable."

As Hasson stood in his front yard, a truck carrying two kayaks drove past, in the direction of Knapp ponds. Hasson pointed to his own springtime escape, in the form of some recently tilled dirt by the brook, where he and his son will soon plant their garden.

"You've got to have something to look forward to," he said.

The original print version of this article was headlined "Isolation Generation | For Vermont's elders, the hardest phase is still to come"