For the Past 15 Years, the Burlington Bocce Club Has Hosted Friendly Throwdowns at Oakledge Park 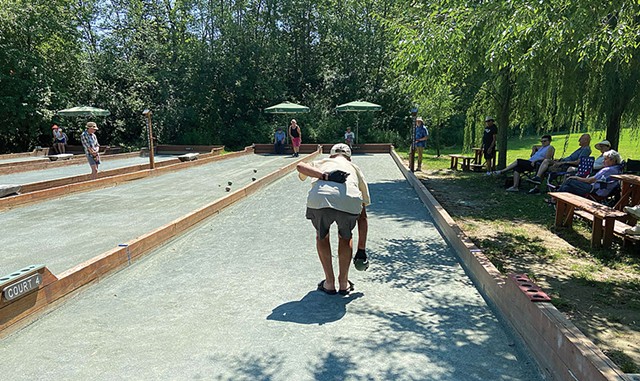 It's easy to sympathize with Oakledge Park visitors who recall better days when blue-green algae left Lake Champlain more or less alone. But for members of the Burlington Bocce Club, regulars on the park's recreational scene, the good times roll regardless of bacterial load.

For 15 years, the club has claimed a tract tucked behind some trees off the lower parking lot. With membership now at nearly 200 players, and the bocce courts numbering four, the Burlington Bocce Club heads into the twilight of its 2022 season at peak popularity. A pandemic can't stop it. Even pickleball — the invasive zebra mussel of athletic endeavors — doesn't stand a chance.

Bocce has roots reaching back, by some accounts, to 900 BC. Historians trace the game through Egypt and Greece into Rome, where bocce most likely took on its association with what is now Italy. The word bocce originates in the Latin bottia, which means "ball."

Although bocce is played worldwide — England has a lawn version called bowls, and France has pétanque — the Italian variation is most visible in Vermont. The two most active Vermont bocce clubs outside Burlington are the Italian American Club of Rutland and the Island Bocce Club in Grand Isle. The Vermont Italian Cultural Association books the Oakledge courts for its own tournaments throughout the season.

The Burlington Bocce Club's origins are as cosmopolitan as the game itself. tweet this

It's easy to understand why the game might have been popular in simpler times when one considers its simple objective. Players take a few balls, roughly the size of croquet balls, and throw them underhanded or roll them toward a smaller ball, each player aiming to get closer than the other players. The target ball is typically called the pallino. Points go to the ball closest to it — or balls, if a player has tossed more than one ball closer than any of the competitors'. A thrown ball that rests against the pallino is a called a "kiss," and it earns a player an extra point.

The Burlington Bocce Club's origins are as cosmopolitan as the game itself, beginning with an informal lawn bocce group in Calahan Park. One of those early players was Zander Ponzo, a University of Vermont professor who'd seen bocce played while on vacation in New Zealand. Another was Smajo Sehovic, who'd refereed matches professionally in his native Bosnia.

Both men's names come up often in conversation with Burlington Bocce Club members. Ponzo, who died in 2021, is described as an enthusiastic club recruiter always eager to teach newcomers the sport. The club held two tournaments in his name this season. Both were geared toward novice players to honor Ponzo's teacherly spirit.

Sehovic, at 77, is known as one of the club's leading competitors. The club's tournament history tells a tale of his prowess. He heads a five-person team, Vrbas (named for a river in Bosnia and Herzegovina), that includes his grandchildren.

Sehovic estimates that, in the early years of the club, roughly 70 percent of the members were Bosnian. Today, he said, it's more like 30 percent.

According to Burlington Bocce Club president Deta Pearce, a member of the High Rollers team, most club members belong to one of three leagues — red, green or blue. Each league has about a dozen teams. While some tournaments can involve singles or doubles players, as in tennis, all Burlington Bocce Club league teams play doubles matches and can have up to five players.

Leagues play weekly. Nonleague players play whenever they like. (Membership includes access to the gear shed.) The club also holds tournaments throughout the season, in which nonmembers can participate for a modest entry fee of $5 to $10.

Beyond the simplicity of playing bocce, the club's robust growth owes something to its affordable seasonal dues: $20 for an individual and $40 for a family; league teams pay an additional $40 per team (not per player).

"On the court, there's almost something Zen about it." Ashley Watson tweet this

While the barrier for entry may be low, this is not the bocce you've played in someone's backyard while waiting for burgers to cook. The "pro" courts at Oakledge Park are boarded on all sides and surfaced with Har-Tru, a greenish mineral blend that tennis fans might recognize from green clay courts.

Tending to the bocce courts is a regimen of sweeping, raking, spreading the Har-Tru, rolling, wetting and rolling again. Even with all of that TLC, the courts find their own groove over the course of play. Getting the lay of the land can benefit the astute player, but club member and maintenance head Lew White sees that as no major advantage.

"I walk them all the time. I know the courts pretty well," White (team La Dolce Vita) said. "I still can't always get the ball to do what I want."

The courts and other refinements, such as a shed to house the playing and maintenance gear, are fruits of the club's collaboration with Burlington Parks, Recreation and Waterfront. According to Deryk Roach, the city's parks and central facilities superintendent, Burlington Bocce Club's facilities have benefited from the taxpayer-funded Penny for Parks capital improvement program. Two of the courts are wheelchair-accessible, shade trees cut the heat of high summer, and the city recently ran a water line to the courts, which kick up a lot of dust.

The "symbiotic" relationship aligns with his department's mission, Roach said: "[The cost] adds up, but it's all part of a great park experience. That's why we do our job."

Running a club in a popular public park is not without its challenges. Park signage clearly conveys Burlington Bocce Club's priority use of the courts, and Roach said the club and the public have shared the space amicably. Still, club officials have had to respond to at least one report of someone answering nature's call in the woods between the bocce courts and the Southwind Drive neighborhood. And not everyone is psyched to play bocce downwind of a marijuana-tinged breeze, which can drift over the courts from time to time on league nights (probably the green league's).

Jeff Spengler, of team Bocce Bums, is the club's unofficial liaison with Roach and, like many club members, a booster for bocce's benefits. He joined the club at age 58, decades after stepping away from softball, touch football and the like.

In an email, Spengler described the bocce club as a "re-creation" of the play experience that had faded from his life: "It was reminiscent of playing outside as a kid until you got called in for supper. It was addicting!"

La Dolce Vita team member Ashley Watson can relate. "It's not very complicated. You don't have to be athletic, but there's something about it that's kind of addictive," she said, noting a fondness for the sound of a ball smacking the boards. "On the court, there's almost something Zen about it."

While bocce may not offer the kind of cardiovascular workout going on in other parts of the park, its wellness benefits are myriad. Luba Routsong (team Breaking Balls) offered heartfelt testimony to the club's importance to her and her husband, Tom Murray, who is experiencing stage I Alzheimer's disease.

"Bocce is a brain activity," she said. "And that's what keeps him coming back ... The doctors have told us, 'Don't stop moving.'"

Routsong said other club members take care to include her husband, forgiving him an occasional lapse about a rule or the status of a match. "No one gets mad at him," she said. "He's a normal joe who loves bocce."

Burlington Bocce Club members consistently cite that sense of community as a draw. "It's just a great group of people," said club president Pearce, who threw her first bocce ball six years ago, after relocating from Maine to Vermont.

While bocce action is undoubtedly a great fit for older players, Pearce and Watson were quick to note that Burlington Bocce Club members range in age from teens to octogenarians.

One of the younger players, 14-year-old D.J. Curran, has been a club member for eight years, having started while vacationing in Vermont. "I just love bocce. I've always loved bocce," he said. "It's fun. It's good for the brain. I like meeting people and watching." 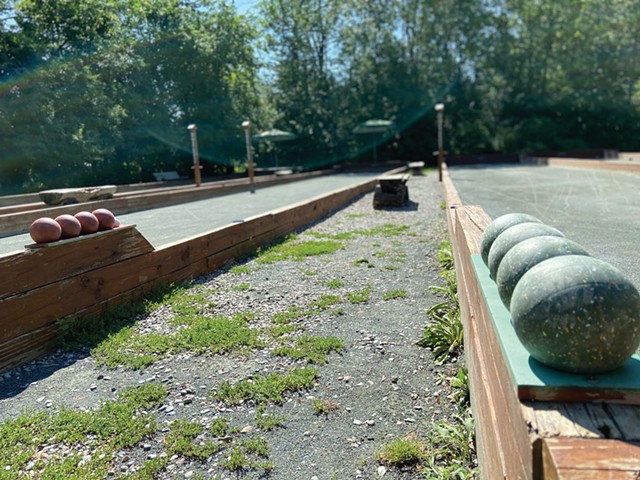 That sense of community doesn't mean club bocce isn't competitive. Tournaments tend to have a more serious vibe than league play, Watson noted; you won't hear music playing at a tournament, for example.

Lois Price (team Flash Mob), who runs the club's tournaments, said civility and good sportsmanship "are never overlooked," even if the handshake has yielded to the pandemic fist bump. The expression "Good bocce" rolls off players' tongues before and after each match.

Jay Ashman (team Roll Models) appreciates the friendly vibe. "It's really competitive, but the words 'friendly competition' don't really do it justice," he said. Although the measuring tape often comes out to ensure fair scoring, "There's never any complaining or disputing. It's all just really good-natured," Ashman said.

The Burlington Bocce Club has carried an ancient game into the current era by welcoming a cross section of people as diverse as those who visit Oakledge Park — even flatlanders. As Roach put it, the club "combines new people, old people and everybody in between."

And Oakledge Park, cyanobacteria be damned, "is a pretty nice backdrop," he added.

No offense to pickleball.