For the Love of Light: The Lamp Shop Is Turned On | Housewares & Décor | Seven Days | Vermont's Independent Voice

For the Love of Light: The Lamp Shop Is Turned On 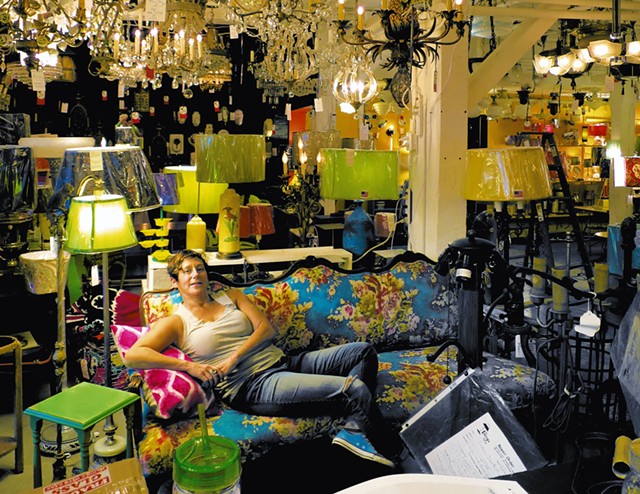 Liz Segal unwinds the bubble wrap from a chandelier encircled with orange and red plastic tiles, like a carousel around a brass center. It's one of a matching pair of '50s-era dangling lamps that she discovered in upstate New York on her latest buying trip.

The owner of the Lamp Shop, a lighting boutique in Burlington's South End, Segal selects the bulk of her mostly vintage inventory during this annual August jaunt. She also visits her favorite "pickers" and flea markets in central and western New York and sometimes travels through Ohio, Pennsylvania and rural Virginia.

These trips result in hundreds of newfound pieces that Segal and her staff will unload into a storage room behind the Lamp Shop, which occupies the pink storefront at 424 Pine Street. During the summer, the covered front entrance is lush with plantings in retro receptacles. And during the South End Art Hop, Segal attracts admiring passersby with sculptural, colorful lighting that spins overhead.

"We tend to find things and buy things in weird themes," Segal says, noting that orange repeatedly popped up during her recent trip. "Themes just present themselves, and whatever you happen to fall in love with, you buy."

Sometimes Segal purchases pieces she doesn't personally love but knows will appeal to those with different tastes. Sometimes she fulfills a regular customer's request. Or she tries to replenish stock that has dwindled, such as the Italianate floral chandeliers that fly out the door.

In general, Segal looks for "anything that's different, funky and cool."

The Lamp Shop embodies all three qualities. It's jam-packed, a jungle of lighting fixtures. Chandeliers crowd the ceiling, grouped by style. Constellations of crystal twinkle over an arrangement of living room chairs and tables. Floral fixtures cluster like overhead bouquets near the counter. Midcentury globes and groovy colored-glass enhancements hang on another side of the shop. Art-deco pendants hover over the center, along with large fixtures such as a wagon-wheel-size ring of lights that would look right at home over a banquet table in "Game of Thrones."

Table lamps perch on nearly every surface, including a group of ceramic bust bases by a local sculptor. Floor lamps bunch like flocks of flamingos. More lampstands, awaiting repairs, sit in a storage room on the north side of the shop. Every style of sconce adorns the walls.

Open shelves hold stacks of lampshades in a multitude of shapes, sizes and colors. The Lamp Shop corners the local market for unique shade options, Segal declares. They come in pink and lime green, in paisley patterns and geometric waves. They're made of silk, linen and recycled plastic bottles — and mostly fashioned by American companies, she says. One style has an unusual shape: oval on top and rectangular on the bottom.

The Lamp Shop sells finials, bulbs and a small amount of jewelry, such as necklaces made of sliced billiard balls. A year ago, Segal brought in furniture, rugs and home décor accessories by designer Jenny Blanchard, who previously owned a Shelburne shop called Chez Bohème. Blanchard favors vivid colors and bold patterns, and her upholstery transforms conventional antique furniture into modern art. She hand-sanded a metal table that's currently in the shop, endowing its surface with crazy swirls.

It's "your grandmother's cool stuff, reimagined," describes Segal. She has turned the Lamp Shop's entry room into a Blanchard showcase, complete with a large leopard-print rug and a chair with a white shag seat.

Interior designers from Boston and beyond stumble upon the Lamp Shop and return for its eclectic collection, Segal says. And it looks different every time.

"We don't have full control over it," she says. "It's whatever we happen to find."

Paige Savage of South Burlington likes to bring out-of-town guests into the shop. Her daughter, an interior designer, introduced her to the place. On a late August afternoon, Savage arrives with Martha Walker, who lives in California's Bay Area.

"It speaks to you when you come in," Walker gushes. "It says, 'Wow! This is fun.' Whoever did all this loves to play."

In 2000, Segal and her husband, Andy Arp, bought the lamp business that his brother-in-law operated in a small space in Rochester, N.Y. They took over his inventory and moved it into the building where Segal had a studio upstairs and had made wooden children's décor since the mid-'90s.

Business has boomed over the last few years, Segal says, though she didn't give specific numbers. The summer tourist season benefits most Burlington retailers, but the Lamp Shop continues to shine during winter doldrums, when people crave light, she notes.

"The second the clocks shift to darkness," Segal says of the November change from daylight saving time, "it's amazing what happens with our business."

The shop houses about 750 pieces at a time, with 1,000 or more in the back rooms waiting for repairs or refurbishing before hitting the sales floor. Prices range from about $75 for a sconce to $2,200 for an elaborate fixture; a particularly special model might be upwards of $4,000. Shades cost between $30 and $300.

Segal and her staff take pride in the cheeky sayings they write on price tags. The tag hanging from a huge plaster ceiling fixture, painted to mimic brass, reads, "Plastered never looked this good!"

Turns out, Bombardier loves lamps. She's a whiz at wiring and repairs, which Arp taught her. On her left hip is a large tattoo of a slipper-glass sconce — an art-deco design with an elegant, impossible-to-replace frosted floral-shaped shade. It's the kind her husband calls "too much," she says. While unpacking the latest buys, an ornate arm or yellow-marble base of a floor lamp prompts Bombardier to ooh and ahh.

"Um, hi, where did you get this beauty?" she asks Segal in the rear storage room as she gently removes the plastic from a lamp base of iridescent glass in gold and pink tones. Bombadier turns it over to examine the bottom. "Oh, it's Czechoslovakian."

Segal retains a cadre of pickers she inherited from Arp's brother-in-law. "Back Row Joe," whom she first met manning a table in the back row of a Utica, N.Y., flea market, sends her smartphone pictures of his discoveries all year. Pickers scour estate sales or dig through attics for worthwhile treasures, setting aside those they know Segal will like. Some pickers clear out old factories or storage units and sell to multiple clients.

On her own excursions, Segal meets people who connect her with others who have stashes of lamps. One time, she recalls, a guy showed up in a U-Haul at 10 p.m. to let her rummage through a truckload.

"Because we buy so many lights, people start finding us," she explains.

On her recent trip, Segal picked up two huge metal movie reels that she plans to turn into chandeliers. In the storage room, she holds up a theme-appropriate orange bomb casing that she envisions as a lamp base. Wearing turquoise Chuck Taylor All Stars and huge hoop earrings beneath her cropped, reddish-brown hair, Segal unwraps a plastic light-up "Taxi" rooftop sign.

"I kind of picture the taxi light going on top of somebody's bookshelf," she says.

Segal rejoices in these quirky catches. She points to an earlier score: the Love Analyzer bar-top video game, which tests the user's sex appeal with several questions.

"Unfortunately, we've used it for too many Art Hops, and it's broken," Segal says.

Regular customers from Washington, D.C., stop at the Lamp Shop every year during Art Hop, she adds. Another attendee fell in love with a giant Murano glass lamp shaped like a flower, and her husband called later to have it shipped for the woman's birthday.

Each incoming piece gets tagged with a code that indicates where and when it was purchased and the price paid. The staff rewires most lamps, "because we just don't trust other people's work," Segal says. Christy Mitchell, who runs the S.P.A.C.E. Gallery down the street, works in the Lamp Shop a few times a week to help out with repairs at the workbench behind the front counter. She learned the biz from Andy Arp and, later, at Conant Metal & Light.

Despite its glowing run, the Lamp Shop has experienced disaster, too. On Super Bowl Sunday in 2015, Segal and Arp were returning from a trip with their son when a pipe burst on the third floor of the building. Water flowed directly into their shop.

"We had, like, standing water in fixtures," Segal recalls. "Everything was soaking wet. We lost over 700 lampshades."

She and the staff had to refurbish the entire space. And they dumped a lot of stock that they realized they didn't need.

"It was a blessing disguised as a really tragic event," Bombardier says.

Segal agrees: "It's a much happier store."

Correction, September 19, 2017: An earlier version of this story misstated Christy Mitchell's training and the location of Liz Segal's Burlington studio.