For Stonemason Thea Alvin, Life Is About Making and Sharing Beautiful Art

An astonishing stone corkscrew arch marks the spot along Route 100 where Thea Alvin put down roots — and rocks — in Morrisville. It took her two years to build the Helix, as she named it, which frames the Green Mountains in the distance through a series of arches that resemble a stretched-out Slinky.

Her work can also be found farther afield, from Saint Michael's College in Colchester to Duke University in North Carolina to the Piedmont and Puglia regions of Italy. Alvin's precisely circular or keystone-shaped openings in curvilinear walls, all of which she improbably constructs from dozens of tons of fieldstones, have caught the attention of the New York Times and Oprah Winfrey.

"She really lives in a work of art." Meg Reinhold tweet this

For years, Alvin, now 54, would travel for her work and return to her 1810 farmhouse and century-old barn in Morrisville. That is, until a devastating 3 a.m. fire in December 2017 destroyed the barn and half of the house. The cause was never identified; Alvin suspected spontaneous combustion in a load of hay that had been delivered the previous day.

The fire killed 10 goats and 30 hens, along with 10 trees, and destroyed the living and working spaces of several artists who had been renting from Alvin. The tragedy spurred Alvin to a new creative project: designing and constructing the barn and house she had always wanted and healing from the ordeal in the process. 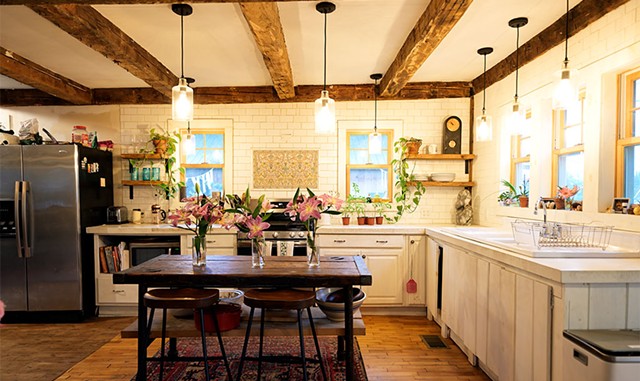 Alvin showed Nest around her home on a recent sunny day, starting with the Helix. Asked why she made it, she said, "Because it's impossible. I like to do hard things, big things — because I'm little." (Alvin is 5 feet, 2 inches tall.)

In April, the 20-year-old Helix was destroyed by a street sweeper. Alvin called on "my stonemason community," as she put it, for help. In four days, 20 of them rebuilt the sculpture on top of a raised berm that Alvin created, out of the way of future sweepers.

That communal approach was typical. Generous and collaborative, Alvin operates in a world of enthusiastic friendship and mutual support. When her barn burned, Philip Sweet of Sustainable Earth Project in Waitsfield helped her design a new one. A team of professional timber framers cut the pieces in 17 days, and some 100 friends showed up to raise the new barn over three days. The volunteer crew slept in tents on Alvin's land or in her half-burned house, sharing meals and listening to music while they worked.

One barn raiser was Greg Reid, a client who became a friend after Alvin built several stone structures on the grounds of his event garden, Mandala Gardens in Marion, Ill.

"I drove from Illinois," Reid recalled by phone. "I have no framing experience, but I was willing to go out there and do what I could, [because] she herself is so giving."

"[Alvin is] an extrovert, just a really friendly person. People want to help her, and she helps them," said architect Mac Rood, of Bast & Rood Architects in Hinesburg. Rood and Alvin teach classes at Yestermorrow Design/Build School in Waitsfield. They also coteach a stone restoration class through the school in Ghesc, Italy, an abandoned 15th-century village constructed completely of stone.

Vermont filmmaker Art Bell of Dreamlike Pictures documented Alvin's barn raising in a short titled "A Barn Built From Love." Narrating the experience, Alvin expresses her primary reaction to the fire: anger. "I felt violated and shamed," she says in the voice-over. "It leaves your heart bleeding all over the blackened snow."

There was little sign of that trauma as Alvin showed off her new barn. Along the way, she replenished the chickens' water — her brood is again at 30 — and tended her 10 Angora goats. The females roam with their five kids between the barn and an adjacent enclosure. The two billy goats are kept in a separate pen, where they vie for Alvin's attention. ("This is my boyfriend, and this is my other boyfriend," she said, introducing the affectionate animals.)

The hens produce about 18 eggs a day. Alvin gives them away to the community or uses them for barter — as she does with the blueberries and apples she grows, the honey she collects from her beehives, and the mohair yarn spun from her goats' sheared coats.

A back stairway leading to the barn's second-floor deck — built, like many features on the property, by Yestermorrow students — provides the entrance to an upstairs studio and living space outfitted with a woodstove. Alvin hopes eventually to host an artist residency there in the style of the Johnson-based Vermont Studio Center's Vermont Artists Week, which she has attended.

Just below the deck and beside an outdoor sculpture studio — built for stone sculptor Michael Clookey — is a stone retaining wall featuring a circular arch fitted with a whimsical round, yellow door. The Alice-in-Wonderland-like space serves as a root cellar in the winter and a tiny getaway cave, complete with rug and armchair, in the summer. Alvin led a workshop through her stonemason business, MyEarthwork, to help construct it.

She also built the two ponds on her property — a small koi pond and a large one with a waterfall running over a projecting slab — and the stick-and-vine archway, called the Portal, that leads to her burial site for animals. And the pizza oven, a circular fieldstone construction with a conical cement top that imitates the stone houses she restores in Puglia, called trulli. Alvin holds regular pizza nights there for friends in a grassy space strung with lights.

"We wanted to build a beautiful place to be because we work from home," she said, as the tour turned to the house. The artist also cares for her mother, Abbie Alvin, who has Alzheimer's, as well as three golden retrievers.

The post-fire house is a concatenation of forms. The surviving part of the old farmhouse contains a new kitchen with original ceiling beams now exposed between plaster installed by a Yestermorrow class. ("We never knew the house was timber-framed until the fire," Alvin said.) A tower addition at the back — designed, framed and roofed by Rood with his Yestermorrow class — holds a living room with a main bedroom above it.

A breezeway containing Alvin's stained-glass and fiber studios — she learned to make windows at Yestermorrow and taught herself to dye yarn — connects the living room to the former garage via a hidden door that's disguised as a bookcase. The garage is now a cozy living room for Abbie, who lives in an attached second tower that contains a small kitchen and upstairs bedroom.

Handmade features and objects are integrated everywhere: Granville artist Meg Reinhold's living room mural of giant Queen Anne's lace, and another of birch trees in the bedroom; a carved wood table and cabinet made by Alvin's grandfather, whose parents emigrated from Italy; gingerbread balusters on the staircase that Alvin carved in homage to her upbringing on Martha's Vineyard in Massachusetts.

Reinhold, who recently became a full-time muralist, was a cook at Yestermorrow when she first met Alvin. She subsequently took a class with her, pre-fire, that included a tour of the house. Alvin's bedroom mural, completed two years ago, was Reinhold's first large-scale commission.

"She gave me free rein and really encouraged me," Reinhold, 38, recalled. "She's been a mentor to me."

While she was painting the living room mural in May, Reinhold continued, community members were constantly coming and going: a woman who purchased one of Alvin's stained-glass pieces, a homeschooled child who was helping Alvin with her seedling plants, a doula who came to help the goats going into labor.

"She's always been really open with sharing her space, and she's such a gracious hostess," Reinhold said. "I've visited as a student [and] as a friend; she's had spinning and knitting nights at her house, fabulous pizza parties — any excuse I have to go there.

"It's a sanctuary space," Reinhold added. "Thea's always bringing people through. She loves to share all the art incorporated in her lifestyle. She really lives in a work of art."

For Alvin, that last point is the key to life.