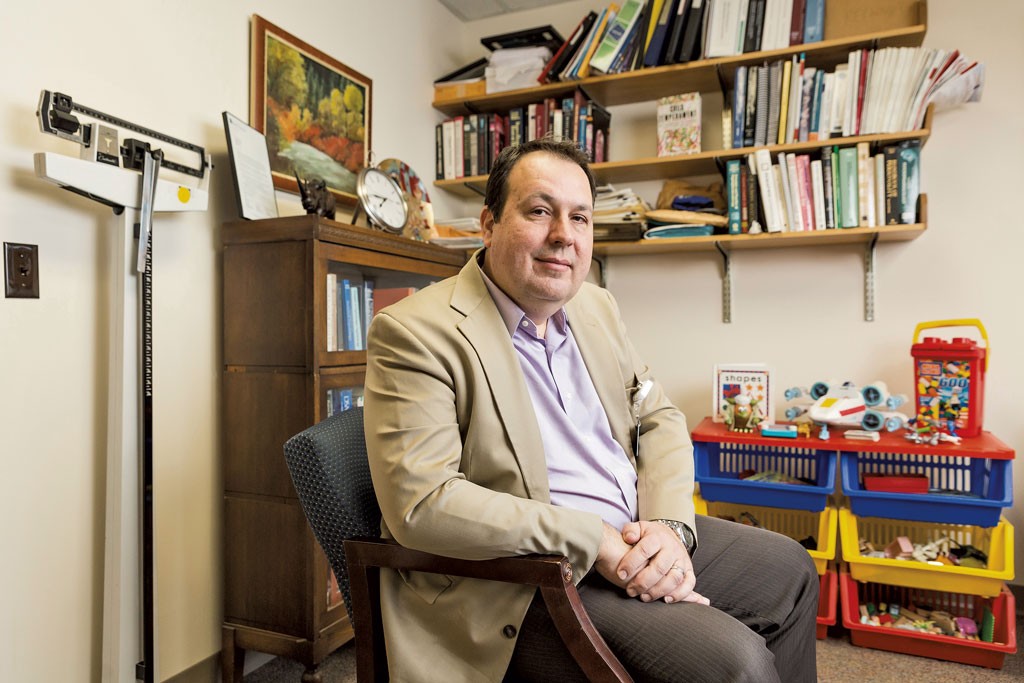 Dr. David Rettew's office has a flying Lego machine and a three-story pink and purple dollhouse, but his work is far from childish. The toys help transform a potentially scary examination room into a welcoming space for his patients — young Vermonters with psychiatric needs.

Rettew is a tall, bear-like man, but his friendly demeanor makes it easy to envision him interacting with young patients. He is one of some 30 child psychiatrists in Vermont — specialists in short supply to meet increasing demand.

"Our waiting list is getting close to a year," said Rettew, who heads the pediatric psychiatry clinic at the University of Vermont Medical Center. "We have the longest waitlist in the entire medical center," he said of the family-focused clinic that attracts patients from Vermont as well as upstate New York.

For decades, the number of medical students who choose to become child psychiatrists has remained flat, Rettew said, and the shortage of pediatric psychiatrists isn't new or unique to Vermont. But "demand has gone up," he added. One reason is that people are more likely to seek treatment for behavior they used to ignore, Rettew said. Another is that the threshold for making a diagnosis is lower than it once was.

The most common reason children are referred to psychiatrists is "aggressive, defiant behavior" that primary care doctors have treated without success, Rettew said. "We see a lot of kids with anxiety, obsessive compulsive behavior, bipolar and autism."

"I try to have crisis slots," Ehret said, which allow her to see some children within a couple of weeks.

"We have been working with the designated agencies to ensure there is timely access to child psychiatrists," McMains said. "We don't want more than three or four weeks." Adults can also have trouble scheduling timely psychiatric appointments, a state official acknowledged.

Long wait times, especially with psychiatric illnesses, can have detrimental effects. Treatment begins with an assessment, which can be a lengthy process with children. Often the assessment looks at family members, too. Treatment may include psychotropic drugs that affect the brain and talk therapies that help change behavior.

"The longer the lag time, the more difficult to treat," said Dr. Robyn Ostrander, medical director of child and adolescent services at Brattleboro Retreat. With 20 psychiatrists on staff, it's the only hospital in Vermont that provides in-patient care for children with psychiatric illnesses.

Ehret agreed, noting that mental illness in children can impact their social interactions, academics and emotional growth, and delays in treatment may result in a child developing new symptoms, such as depression, anxiety and anger. "Then they come in with all these issues," she said, in addition to the underlying illness.

"One of the hardest times to wait is when your child is leaving the hospital and there is a long time to see a psychiatrist," said Kathy Holsopple, director of the Vermont Federation of Families for Children's Mental Health, a nonprofit organization of families trained to help other families. "Often the family needs support, as well as the child," Holsopple explained. "You can feel very much alone."

Families also rely on primary care doctors, psychologists and other mental health providers to help fill the gap while children wait for appointments with psychiatrists. Primary care physicians can prescribe psychotropic drugs, but many only feel comfortable recommending some of the basic medications, not complicated combinations or medicines with significant side effects.

Local child psychiatrists describe the specialty as one that struggles to attract medical students. Some believe "it is not as cool as other medical specialties," Ostrander said. Ehret explained that "there are a whole bunch of people who see it as soft science." And Ehret and Rettew agree that many doctors-in-training receive little exposure to child psychiatry. As a result, students never get the chance to fully investigate it as a possible field of study.

Ehret also argued that the push to grow the number of primary care doctors has come at the expense of fields such as child psychiatry. For some future doctors, money may be the problem. The path to become a child psychiatrist is lengthy and expensive: It involves two additional years of training beyond the standard four years of medical school and a three-year residency; for primary care doctors, just a three-year residency is required after medical school.

New child psychiatrists are saddled with a mountain of debt that they can't pay back as fast as doctors in specialties that perform "procedures," Rettew said. "Time versus procedure, the reimbursement is less," he said.

And though reimbursement rates are the same for psychiatrists seeing adults and children, Ehret said, "There is so much more time involved in treating a child. I would say three times more time and energy. I can see why that may not be appealing."

Mental health officials in Vermont are working to attract more people to the field. The College of Medicine at UVM has funding from the Klingenstein Third Generation Foundation "to foster interest in child mental health issues and careers in child psychiatry," Rettew said. "The program here is like a club that any medical student may join for free. It is totally voluntary," he explained. Students attend lunch presentations on various child psychiatry topics, shadow child psychiatrists and attend a national conference on the topic.

Third-year medical student Anja Jokela has attended the program. "So much of our classroom work is not focused on mental health. You have to seek it out," Jokela said. "I have a strong interest in pediatrics and mental health." But she expects to combine those interests by pursuing family medicine rather than child psychiatry.

Rettew noted another initiative to attract child psychiatrists to Vermont. In 2009, UVM launched a child and adolescent psychiatry fellowship that provides two years of specialized training to doctors. Two fellows are admitted each year. "At least half our graduates stick around," Rettew said.

Technology can also play a part in treating patients remotely. Telemedicine involves a doctor — often one of the psychiatric fellows — seeing a patient via interactive television. "We try to extend our reach that way," Rettew said.

But Ehret in Berlin isn't sold on it. "I've gotten some negative feedback," she said. "There is so much to learn from seeing someone in person."