For Many Temps in State Jobs, Health Insurance Is Not an Option | Business | Seven Days | Vermont's Independent Voice

For Many Temps in State Jobs, Health Insurance Is Not an Option 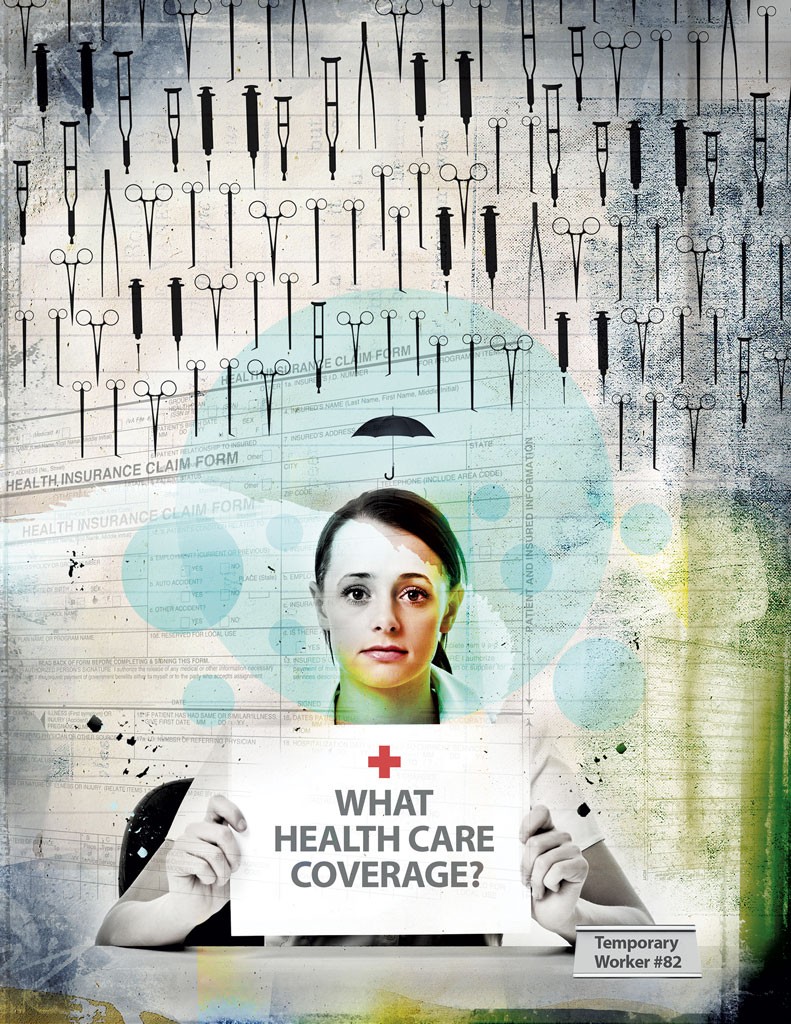 Even as the legislature wrestles with issues such as mandating sick pay for all workers and trying to get universal health care, a sizable number of the people working for the state receive no benefits.

State officials used temporary workers to fill critical customer service jobs for Vermont Health Connect, which launched in October 2013. But because the state doesn't extend benefits to temps, those workers were not offered coverage.

After Haslam's organization spearheaded a Health Care Is a Human Right campaign, he heard from several of those temps. They said that they looked at purchasing health insurance on their own but found it too expensive. "They chose to go without benefits and pay a penalty," he said.

None of those workers wanted to talk to the press for fear of being fired, Haslam said. One confirmed that worry in a phone chat with a reporter, but declined to say anything more.

"When you don't have job security," Haslam said, "how is it possible to advocate for yourself?"

A year ago, temporary slots authorized for Vermont Health Connect totaled more than 100. Positions had been added to the health access eligibility unit of the Vermont Department for Children and Families, based in Essex. With the launch of the federally mandated health insurance exchange, the unit had a new task: to evaluate the eligibility of Vermont Health Connect customers for federal tax credits and state premium assistance.

Maribeth Spellman, the state's human resources commissioner, defended the decision to use temps. "It is a little risky creating 113 full-time positions when you don't know what your need is going to be or what the funding will be. It invites caution," she said. However, the lack of benefits and limited term of the positions made it difficult to attract and retain workers, Spellman acknowledged. The state was never able to fill more than half the slots.

Thanks to a hiring experiment or "position pilot" authorized by the legislature last year, DCF was able to convert 113 temporary call-center positions into 73 full-time slots — with benefits — in September. The position pilot also gave hiring flexibility to a few other state departments. Since summer, 141 temporary or contract positions have been converted to full-time slots with benefits.

The position pilot beefed up the staff in the health eligibility unit just in time for the health insurance exchange's second open-enrollment period, which began in November and wraps up on February 15. The positions in this unit are "limited service" rather than permanent, which means they are authorized for two to three years, with extensions possible.

"This produced better outcomes for both staff and for the Vermonters they serve,"said Lawrence Miller, senior adviser and chief of health care reform for the Shumlin administration.

The 73 full-time positions cost the state the same amount as the 113 temporary slots — a condition set by the legislature. Cost is especially important because the federal funding that paid for the operation and maintenance of Vermont Health Connect during its launch year must be replaced with state dollars — $51 million in the upcoming budget year. And lawmakers are wrestling with a $93 million gap between projected revenues and spending.

There's another group of people who work for the state but receive no benefits: private contractors.

The 2014 Workforce Report shows that the state spent $92.6 million on 2,011 personal-services contracts issued in the year ending June 30. Those contracts are agreements under which an individual or entity provides a service valued at $10,000 or more in a year.

Two contract companies are providing critical customer-support services to the state's health insurance programs. Yet even as the state relies on contractors, it has also challenged how some private employers use them. The Department of Labor has taken legal actions against numerous businesses it claims misclassified workers as independent contractors to avoid paying for their unemployment insurance and workers' compensation insurance.

Lawmakers have wrestled with bills that would change the definition of independent contractors but have been unsuccessful because they have yet to find a way to please both businesses and the labor department.

The state has contracted call-taking services for its subsidized health programs for 17 years. The 90 folks answering Vermont Health Connect phone lines all work for the contractor Maximus at a call center based in downtown Burlington. Maximus handled calls for the state prior to the launch of Vermont Health Connect.

Most of the 90 call-takers are full-time Maximus employees, although they may have started as temps because the contractor uses an employment agency to find workers, said Sean Sheehan, public information officer at Vermont Health Connect. Once Maximus hires them, the call-takers become eligible for the company's health-insurance benefit, which includes medical, dental and vision coverage.

The company and workers share the expense, but the Maximus website doesn't specify the workers' share of the insurance premiums or size of the deductible they pay. It does note that employees cover the full cost of vision insurance. Maximus spokesperson Jessica Klenk declined to comment.

Last summer, the state hired another contractor — OptumInsight — to help fix the myriad problems at Vermont Health Connect — including a backlog of 14,000 cases in which Vermonters needed to make changes in their insurance. Optum hired temporary workers in North Carolina, Florida and Texas. Their benefits depended on the temp agency that supplied them to Optum, said Christine Farazi, an Optum spokeswoman.

The Optum operations in Texas and Florida closed in late December after much of the backlog had been eliminated, but a small contingent remains in North Carolina.

For more than a decade, governors and lawmakers limited the number of full-time, permanent state workers because politicians saw that as a measure of the size of state government. They didn't want the public to blame them for unbridled government growth, and temps and contractors were a way around the cap.

Steve Howard, executive director of the Vermont State Employees' Association, says many state temps "should be permanent, classified state workers with all the benefits, because they are doing the work of state workers."

The union argues that many temporary employees are "exploited" because they often work side by side with permanent staff but receive none of the benefits, such as health insurance, vacation or sick time.

Leslie Matthews, chair of the VSEA's legislative committee, cited temps in the corrections department and in the state's environmental lab as examples of slots that ought to be permanent.

But commissioner Spellman believes that temps have a place in state government. She described short-term jobs for which temporary workers are appropriate, such as supplementary workers who help process income-tax filings, summer state park and historic site staff, and extra drivers for winter plowing.

In 2014, the VSEA went to bat for temps, pressing the state to grant them sick days. "That is a pretty basic value," Howard said. "If you are sick, you should be able to stay home." Union members supported the initiative partly out of self-interest, Howard acknowledged; permanent workers didn't want to be exposed to illnesses because temps came to work sick.

Howard said the provision was axed at the last minute because Senate leaders wanted to avoid a floor fight over the more controversial push to mandate paid sick leave for all workplaces. Instead, lawmakers directed Spellman to look at the feasibility of providing sick leave for temporary workers.

Spellman's report, filed with the legislature in January, pegged the cost at $420,000 if 2,000 temporary employees used 80 percent of their sick leave and other workers had to be hired to fill in. The report recommends a simple structure for the benefit if it were to be offered: Workers would earn one hour of sick leave for each 40 hours they work.

Lawmakers face another round of lobbying and debate over sick pay, and Howard said he expects the Senate Economic Development, Housing and General Affairs Committee to take up a bill mandating that all employers offer sick leave.

Meanwhile, the position pilot — which converts temps to permanent state workers — will come up for review as budget writers develop next year's spending plan.

Some lawmakers, such as Assistant House Republican Leader Brian Savage of Swanton, have yet to be persuaded that adding more permanent and limited-service employees to the state workforce is a good idea.

Savage worries that the long-term costs of bulking up the state workforce haven't been taken into account. He noted, for example, that the state has struggled to get its pension program on sustainable footing, and hiring more people could aggravate the problem.

Given the state's short-term financial struggles, Savage also questions a hiring strategy that seems contrary to what most businesses do in hard times. "It is the reverse," he said. "Usually private industry will do outsourcing instead of hiring people."

The original print version of this article was headlined "For Many Temps in State Jobs, Health Insurance Is Not an Option"