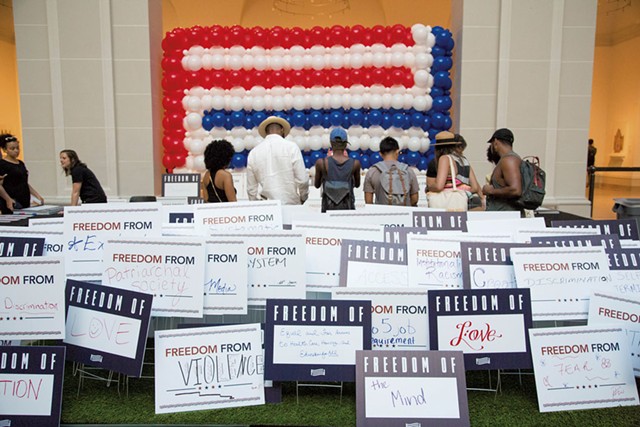 In 1943, during World War II, the Saturday Evening Post ran a series of four illustrations by its star artist, the Arlington, Vt.-based Americana illustrator extraordinaire Norman Rockwell. Expanding on president Franklin Roosevelt's 1941 speech of the same name, "The Four Freedoms" (from want, from fear, of worship, of speech) were used to drum up American patriotism — specifically to help sell war bonds.

Now, more than seven decades later, the "Four Freedoms" are getting a serious reboot — in the 50 states, plus Washington, D.C., and Puerto Rico. Billed as the largest public art campaign in U.S. history, the "50 State Initiative" of New York-based platform For Freedoms aims to facilitate national civic engagement through art and creativity. It comes at a time when questions of American identity, freedom and fascism are roiling.

For Freedoms' interventions have been many and varied: exhibitions, town-hall-style events, artist billboards and other forms of public artwork in art institutions, along highways and elsewhere.

Among the high-profile artists participating are Trevor Paglen and Carrie Mae Weems. Paglen's billboard in Denver reads, "Protect us from our metadata." Weems' Cleveland billboard proclaims, "With democracy in the balance, there is only one choice."

"Centered around the vital work of artists, we hope that these exhibitions and related projects will model how arts institutions can become civic forums for action and discussion of values, place and patriotism," states For Freedoms' website.

Brittany Powell, associate director of the Vermont College of Fine Art's MFA program in graphic design, is facilitating Vermont's engagement with the multifaceted project. Being in the Green Mountain State, she told Seven Days, has raised several unique challenges.

"Because Vermont doesn't have billboards, we didn't propose doing a billboard at all. We proposed the idea of doing a public video projection and a sign-making," Powell said. "We [also] didn't want to say we were going to have a 'town hall' and then have all of Montpelier show up to talk about town governance."

Participants will have the opportunity to complete their own "Four Freedoms"-inspired lawn signs, filling in what they want freedom of, from and to — what Powell described as "freedoms that you take for granted that are kind of being threatened now."

The completed signs will be installed en masse on the VCFA campus. In addition to the sign making, Beltré and Lee will speak on a panel discussion about art and democracy.

For Freedoms and VCFA have also solicited a public installation from Toronto artist and VCFA faculty member Luis Jacob. Though final details are not confirmed, the work will be a large sign titled "Land Acknowledgment," to be installed on the corner of East State and West streets in the north section of the college green. The work will reference the Abenaki as Vermont's indigenous forebears and will be installed in conjunction with Indigenous Peoples' Day, which falls on October 8 this year.

"I think it's incredibly moving," Powell said of For Freedoms and the 50 State Initiative, "because it's a project that has a lot of reach. I also think it really highlights that [these topics are] the focus of so many artists' work right now, and it really brings people together in a way that's very collaborative."

Though Rockwell did address racism later in his career, his original "Freedoms" are warm-hued and gushy, glorifying a relatively comfortable white America. While the fruits of the 50 State Initiative in Vermont remain to be seen, they're likely to reflect a new and changed world.