For Chef and Food Writer François de Mélogue, Cooking Is About Stories 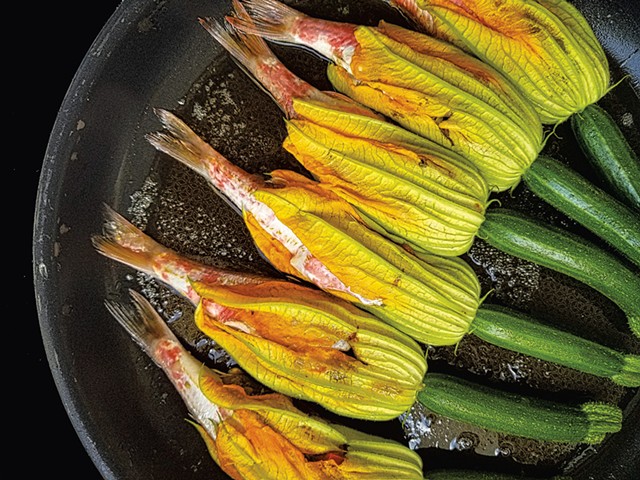 In the back of a freezer at his St. Albans home, nestled near trays of homemade moussaka and dozens of containers of garden tomato sauce, François de Mélogue keeps tubs containing six pounds of "super fat." For more than eight years, de Mélogue, 58, has been saving the flavorful cooking fat from his duck confit, occasionally mixing in other fats such as well-seasoned pork lard. After he uses and cools the mixture, it goes back in the freezer until he needs it again. And again.

De Mélogue's super fat has a story — a history made of up many meals — and that suits him well. A writer, photographer and erstwhile founding chef at the acclaimed Provençal restaurant Pili Pili in Chicago, de Mélogue owns more than 2,000 cookbooks, most of which are historical and French. He's busy writing three of his own.

Today, de Mélogue earns his baguettes and beurre as a freelance writer and owner of VT Snapshot, taking photographs for architecture firms, real estate agencies and other small Vermont companies. What binds all of his work together is a passion for weaving tales using light, color, words and food.

Some of de Mélogue's culinary essays — such as "How a Rabbit Taught Me to Cook," about the time that he was tricked into eating his childhood pet — appear on Medium's Heated site, which was originally curated by Mark Bittman.

While Bittman's cookbook persona is that of "the minimalist," however, de Mélogue leans more toward "maximalist," embracing an aesthetic characterized by abundance and vibrancy. His kitchen is neat and spacious, but it features a dispenser used solely for pastis, a clear, pale green, anise-flavored liqueur that turns opaque and milky when mixed with a few drops of water. Nearby is an antique mezzaluna, a curved Italian tool for chopping herbs, resting on a thick butcher block hollowed from use. 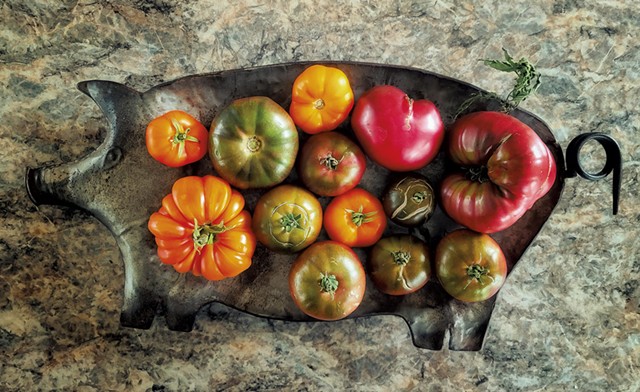 Through a sliding door, visitors find a trim yard and an ever-expanding garden, bursting with French and Italian heirloom tomatoes, radicchio, and alliums such as leeks and shallots. Deep-red piment d'espelette peppers cling to plants that are rapidly turning brown. Then there are the zukes: "Last year, we had 150 consecutive meals with zucchini," de Mélogue said with a chuckle. This year, his 11-year-old son insisted that he grow fewer squash plants.

Most days, de Mélogue serves up restaurant-worthy midday meals for his family. His wife, Lisa, an executive assistant for a tech company, leaves her home office at lunchtime to dine on an array of salads, thin chickpea-flour pancakes known as socca and whatever else her husband has dreamed up. After she returns to work, de Mélogue might spend the afternoon developing recipes and editing photographs.

Spending time in de Mélogue's airy kitchen, watching him stand at a spacious rolling island shelling just-harvested cranberry beans and chopping tomatoes for soupe au pistou, is like being in the audience at a reading. His stories, threaded with pithy phrases, have a practiced quality, and his delight in them is evident. 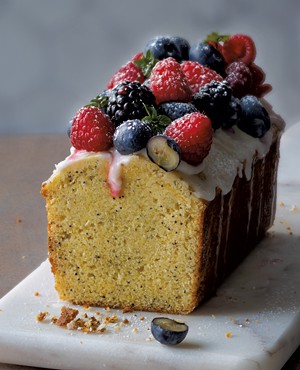 Orating as he wields a chef knife — a family heirloom, he said, not of particularly high quality — de Mélogue discussed his appreciation for French recipes. But he doesn't think less of any other cuisine. "Food is perfect. There is no such thing as imperfection," he declared. "If it tastes good, it tastes good."

That's a tenet he learned from his mother, a native of Marseille.

Born in Chicago to French immigrants in 1964, de Mélogue grew up assisting his mother in the pursuit of fine ingredients. She would put him on her bicycle and ride through dangerous parts of town to find sweetbreads, or drive an hour to buy a baguette, de Mélogue recalled.

On one occasion, his mother sawed the legs off the family's "beautiful dining room table" to make it more suitable for a Moroccan dinner party. "She was fearless," de Mélogue said.

His father, a French professor at the University of Chicago, was somewhat more restrained, though equally fervent about sharing his heritage.

In his late teens, de Mélogue was reading Gourmet magazine when his interest was piqued by an ad for the New England Culinary Institute in Montpelier. To apply, he simply had to write an essay.

"I didn't know where I was going to fit in in the world," de Mélogue remembered. He already had a camera and had turned his bedroom into a darkroom, but the cooking profession called to him. Culinary school seemed like a match, even when NECI chef-instructor Michel LeBorgne tried to scare young recruits with tales of 100-hour workweeks and holidays spent away from family and friends.

De Mélogue attended NECI and fell hard for the Vermont landscape. Vowing to return one day, he went west for his first externship, working with chef Franklin Biggs at the lauded Café Mariposa in Park City, Utah.

"It was the best job. He was unpretentious," de Mélogue said of Biggs. And Biggs put up with his young apprentice — who was, at the time, de Mélogue confessed, a loudmouth and "an asshole" with a brash, "take no prisoners" attitude. Biggs took de Mélogue's youthful foibles in stride and gave him the chance to invent specials, with the caveat that he accept critical feedback.

In 2002, after many gigs at urban restaurants, rural inns and everything in between, de Mélogue helped open Pili Pili in Chicago. The Provençal spot was named one of the world's best new restaurants by Food & Wine and praised in the pages of Gourmet and Bon Appétit.

By that time, though, de Mélogue was beginning to tire of the industry, as his culinary school teachers had predicted. The long hours were taking their toll on his personal life and energy level. A few years after he met Lisa, he decided to shift his focus to travel, writing and photography.

In 2015, de Mélogue produced his first cookbook, Cuisine of the Sun: A Ray of Sunshine on Your Plate, which he candidly called "terribly written and self-published."

His next book, French Cooking for Beginners: 75+ Classic Recipes to Cook Like a Parisian, was contracted by a publisher that identifies hot trends using analytics and finds writers who can pump out books to meet the demand. Nevertheless, de Mélogue said, he's pleased with the result, published in 2020. "I love that book because I got to tell stories," he said.

A reader would be unlikely to detect that French Cooking for Beginners was the product of a book mill. The volume features elegant photography (not by de Mélogue), childhood stories, and clear, simple recipes for dishes such as lentil salad, roasted chicken and ratatouille, with plenty of informative sidebars and tips.

Although the dishes in the book bear their French names — such as Potage Saint Germain, Hivernale — most are simple and seasonal. The fancy-sounding "potage" is split pea soup with ham. The spirit of French cooking, de Mélogue says in the book, is being adaptable and using what you have, such as canned chickpeas, or water in place of stock. "Let your own taste buds be the judge," he writes.

The day his book was published, de Mélogue and Lisa began looking for a home in Vermont. They wanted to provide stability for their son during his boyhood years, although their long-term goal is to live in a modified school bus and travel the country in search of delicious meals.

The home they eventually purchased was larger and had less land than they'd hoped, de Mélogue said, but they got it at a fair price, despite the pandemic real estate bubble. Plus, he noted, the rolling kitchen island, which can be tucked away under a cupboard, was a significant selling point.

Settled for the time being, de Mélogue is pursuing his passion projects while building his photography business. His book ideas include a memoir with recipes and a book about the foods of Provence, which will go into depth about the origins of each recipe. Someday, he would like to give the same treatment to the classic recipes of Vermont. 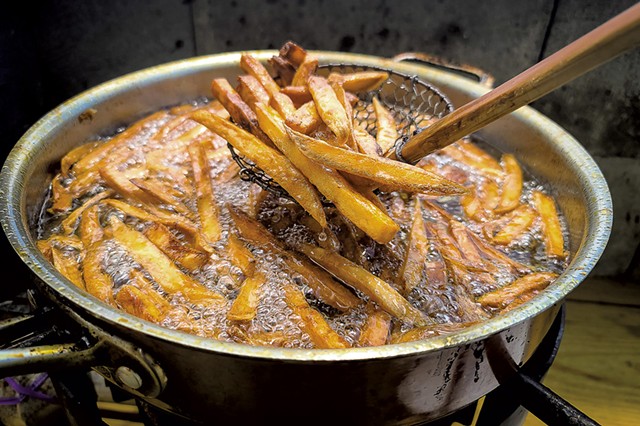 De Mélogue sees his yet-to-be-written books as his legacy, just as the cookbooks he collects hold the legacies of their 19th- and 20th-century authors. "I'm not going to invent a cure for a disease. I'm not going to become a billionaire. A book is what will keep my soul alive after I'm gone," he said.

That and a few pounds of luscious, decadent super fat.

The original print version of this article was headlined "Fat of the Land | For chef and food writer François de Mélogue, cooking is about stories"