For All the World 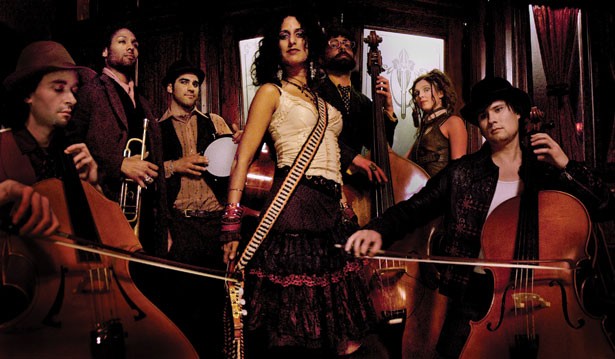 San Francisco's Rupa & The April Fishes are causing quite a stir in both world and indie-music circles, corraling myriad stylistic influences into a globetrotting aural mash-up that's both comfortingly familiar and breathtakingly unique. Led by silk-throated vocalist Rupa - the daughter of Indian immigrants who was born in the U.S. and raised on three continents - the group comes by its duality honestly. In addition to her duties as the band's primary songwriter and singer, Rupa is also a practicing physician, adding another unexpected wrinkle to the musical mystery embodied by the band's forthcoming release, eXtraOrdinary rendition, their first for edgy Charlotte-based world-music label, Cumbancha Records.

Seven Days recently caught up with Rupa via email, in advance of her upcoming Higher Ground performance.

SEVEN DAYS: Do you see parallels between the duality of growing up both Indian and American and your seemingly dichotomous career paths?

RUPA: Yes, I see most aspects of my life having an aspect of multiplicity - the folks I love, the passions I follow, the foods I eat, the clothes I wear. So much of what I do feels like a bringing together of seemingly disparate things. I think it's because I believe these things exist in all of us. I was never a fan of Cartesian dualism - the mind vs. body, arts vs. sciences, Apollonian vs. Dionysian. I believe the spectrum of human experience lies in all of us. It's often a question of what we allow ourselves to believe, experience or understand about ourselves that sets the limits.

RUPA: Interesting question! I was raised in a house where traditional allopathic medicine was seen with the same value as aryuvedic and homeopathic traditions from India. As a physician, I believe that both science and humanity must come together to treat the whole person (and often whole family) that comes to you. I believe we should pool the best from several traditions to find novel approaches to treating people. I think having grown up in several places and around several cultures taught me a certain reliance on my critical thinking, on my ability to use the best of what's available to solve problems or gain insight into disease process or even how to communicate with a patient. My music - what I learn from sitting and really thinking about our human experience - helps me maintain my humanity at the bedside, I think. It helps me empathize and remember how we are all struggling at one point or another.

SD: You write songs in a number of languages, and are able to elicit powerful emotions regardless of tongue. Do you think music might just be the universal language after all?

RUPA: Yes! I think that emotion is the universal language - the molecules and experiences that we all have, regardless of where we were raised or what religion we follow. The human body, the study of it, shows me the true democracy. We are all born. We are all dying. And we have a moment to share with the people we spend our time with. I have had an incredible sense of awareness of time since I was a child. It has shaped my sense of the precious and magical quality of life. It wakes me up and pushes me to write.

SD: Who are some of your Western musical influences?

SD: Tell me something about yourself that I wouldn't find in a press release.

SD: In a perfect world, what do you see as America's role in the global community?

RUPA: Ah! In a perfect world, the U.S. would recognize and take account of its deep history of genocide and racism and realize its identity as a country of immigrants. It would welcome people from around the world openly, to pursue their dreams without fear. It would take care of all its people - with proper health care and an education system that would foster deep, critical thought and a curiosity about the entire world. It would serve as a force of betterment of others around the world, first by example and then through only nonviolent means - meaning supporting education, health care and social services.

It would be a leading example of showing that responding to global warming isn't just sexy or potentially lucrative. It's necessary and vital. It would lead the call to wake up the world's citizenry to create a new currency of social and environmental responsibility.

It would fund scientists and thinkers from around the world to develop new models and new systems of transportation that will free us from our dependency on nonrenewable energy.

It would be a giant meeting place for cultures, where people feel welcomed, fed by the force of the kindness and intelligence of its population, and overwhelmed by its leadership in creating a world that is optimistic and healthy, valuing human life, good and potential over economic profit. We need a paradigm shift. Now.

SD: Americans are seemingly obsessed with labels. But your music certainly defies easy categorization, so, if pressed, what would you call it?