For a North Country Paper Mill, Natural Gas Could Be a Lifesaver 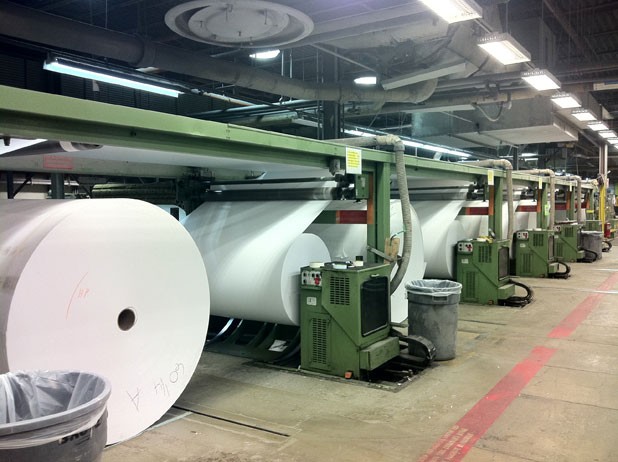 What’s a paper mill to do in an age when people are less inclined to use hard copy? Get lean.

That’s why International Paper’s Ticonderoga mill is offering to chip in $70 million to finance an extension of a Vermont natural-gas pipeline to the New York plant: They’re banking on cheap, abundant natural gas to keep the mill competitive at a time when paper consumption is shrinking between 2 and 4 percent a year.

“We live in an area where we don’t have choices,” says mill spokeswoman Donna Wadsworth. Hemmed in by Lake Champlain to the east and the Adirondack Mountains to the west, and isolated by distance from natural-gas markets to the north and south, the paper mill relies on No. 6 fuel oil to run its main boiler. The cost of that fuel nearly tripled between 2006 and 2011.

“It became the noose around our neck,” says Wadsworth.

Now IP is pinning its hopes on cleaner, cheaper natural gas that would be delivered from Vermont to the Ticonderoga mill via a pipeline under Lake Champlain. The Vermont Gas project would be constructed in two phases — the first would run pipe from Chittenden County to Vergennes and Middlebury; the second, from Middlebury to Ticonderoga. Both proposed sections are raising the ire of neighbors, primarily property owners, across the lake in Vermont. Some of them remember IP’s last proposal, almost 10 years ago, to save money on energy costs by burning tires for fuel.

“International Paper is a large, profitable company … My sympathy is limited,” says Colin Kriwox, a Cornwall property owner who worries that the gas pipeline may cut through his land. “It is a company, not a community. Their profits may be hurting, but, no, I can’t feel bad for a company of that size.”

The International Paper operation is a lifeline for the rural community in New York’s Essex County. The mill employs some 600 workers, making IP the largest private employer in the region.

“International Paper is welcome and very much wanted, not only in Ticonderoga but also in the region,” says Carol Calabrese, codirector of the Essex County Industrial Development Agency. She calls the plant a “respected” and “community-minded” employer. “We’re thrilled to have them, and people are interested in seeing International Paper succeed.”

The paper mill moved from the banks of the LaChute River, in Ticonderoga proper, to the shores of Lake Champlain in 1970; steam from the plant’s smokestack can be seen along a 40-mile stretch of lakefront communities from Ferrisburgh to Benson. Making paper is an energy- and water-intensive endeavor, and the mill pulls some 14 million gallons of water from Lake Champlain every day. The vast majority of that water is treated and returned to the lake.

Between 70 and 80 truckloads of northern hardwood arrive each day at the plant, where they’re turned into pulp and run through noisy machines. The air in the plant is heavy with moisture being extracted from the paper as it dries, gets spun into huge rolls, and is cut into pages and bound in reams.

The plant produces some 900 tons of paper every day; Wadsworth hasn’t run the numbers herself, but she says it’s enough to paper over a three-lane highway from Ticonderoga to Washington, D.C.

The mill’s parent company, International Paper, lives up to its name: IP operates in more than 24 countries and employs some 70,000 people worldwide. In 2011, the company did $29.5 billion in sales.

But it’s not immune to trouble. In mid-2012 the company announced it would close four plants across the United States, in Arkansas, California, Illinois and Ohio. The company also sold off three mills in California and Tennessee as required by the U.S. Department of Justice when it paid $4.4 billion to acquire Temple-Inland, a producer of corrugated packaging and building products. Three years ago, IP shut down a massive plant in Franklin, Va., putting 1100 people out of work. While the Franklin facility partially reopened last year — mainly to produce the “fluff” used in personal-hygiene products such as diapers and tampons, in high demand from a growing Asian market — the retooling restored only a fraction of the mill’s previous jobs.

All this behooves the Ticonderoga plant to be as efficient as possible. It made headlines in Vermont in 2004, when the factory wanted to test tire chips as a potential source of fuel. The motivation was the same: to find a cheaper way to power the operation. But the proposed tire burn incited wrath across the lake. Vermonters staged protests, marched across the Champlain Bridge and filed court appeals. Even then-governor Jim Douglas paid a visit to the plant to convince its officials it was a bad idea.

In the end, IP stuck with fuel oil. Then, last year, it learned about a mill in Maine that had converted to liquefied natural gas, which can be transported by truck. But New York has had a moratorium on LNG since an accident in the 1970s.

By “crazy happenstance,” she says, Wadworth heard a news report on Vermont Public Radio about a proposed pipeline that would carry natural gas from Chittenden County into Addison County. She decided to attend the public meeting referenced in the report, not because she suspected IP might be a potential Vermont Gas customer, but because she was curious about the public reaction to the project.

At that meeting, Wadsworth struck up a conversation with Vermont Gas executives, who told her about horizontal directional drilling, the technique they used to pipe their product under the Winooski and Missisquoi rivers. To get natural gas across Lake Champlain, the company would drill about 30 feet under the bottom, where the expanse is approximately a mile wide.

After a few months of negotiation, in October IP signed a contract with Vermont Gas just hours before a self-imposed Vermont Gas deadline that, if missed, would have jeopardized the timeline for delivering gas to Middlebury by 2014. The contract stipulates IP would pay roughly $70 million for the project, $44 million of which is for infrastructure upgrades to phase one, the proposed pipe between Chittenden County and Middlebury. The signed contract commits IP to a “series of stepped-up obligations” until the mill potentially receives gas, Wadsworth says. That means the mill is on the hook for at least some of the upgrades, even if the phase-two pipeline under the lake doesn’t materialize.

Vermont Gas spokesman Steve Wark says the IP investment is good news for Vermonters: The buy-in helps Vermont Gas get 17 miles closer to Rutland, one of the main markets the natural-gas utility eventually hopes to serve.

“It really does allow us to build for the future,” says Wark, noting his company would have had to rebuild sections of the pipeline through Addison County down the road to serve the Rutland market.

That may sound like an enticement, but Wark insists phase one has always been about serving Addison County customers. The proposed gas line will serve more than 3000 businesses and residential consumers in the area, for a projected $200 million in energy savings over a 20-year period, according to Wark. He says the company is committed to distributing gas among the village centers through which it passes, and also points out that the pipeline will be taxable infrastructure, valued at as much as $40,000 a mile.

New Haven, which is slated to have the longest stretch of pipeline in the county, could stand to see $377,000 in additional revenues each year. But Cornwall resident Jeff Noordsy points out that the pipeline’s value would depreciate over time — and so would tax payments. He is similarly skeptical about the claim that Vermont Gas would distribute in the small, rural communities through which the pipeline would travel. “To me it feels a little bit like the carrot in front of the horse — dangling that notion that, ‘Hey, we might do this for you,’ in order to quell public dissent,” Noordsy says.

If the Public Service Board approves the pipeline plan, International Paper also intends to spend up to $10 million to convert its plant to natural gas — and will receive $1.75 million in grants from the North Country Regional Economic Development Council to do so. Wadsworth says the plant is estimating a 25 percent reduction in fossil-fuel emissions as a result of the switchover.

“We’d like to do it tomorrow if we could,” says Wadsworth. “But overriding that is doing it right.”

Natural gas aside, Wadsworth insists that the Ticonderoga mill — located in what she calls the “finest wood basket in the world” — is well positioned for the future. It weathered the recession reasonably well and didn’t have to lay off any workers. The mill put the brakes on hiring for a few years, but in 2011 started advertising positions again. Last year the plant brought on around 60 new employees, and last Thursday morning the visitor’s log at the mill’s security office listed a few individuals checking in for interviews.

If the pipeline project earns approval from the Public Service Board and stays on schedule, the gas pipeline could reach IP in 2015. Seventy percent of the gas flowing through Addison County would head to Ticonderoga. Vermont Gas is still in the preliminary phases of finding a route through Middlebury, Cornwall and Shoreham to the lakeshore.

Nate Palmer, a Monkton resident, recognizes that the stretch of the pipeline through his town would have been on the docket regardless of IP’s involvement. But he still bristles at the end goal. “Transmitting gas to International Paper is not serving the Vermont public,” says Palmer, who doubts that the gas pipeline would be financially feasible without IP’s buy-in. He’s also upset that the pipeline would transport some natural gas obtained by the controversial process of hydraulic fracturing, or “fracking,” a claim Vermont Gas does not dispute.

Palmer has been offered $4000 for an easement to run pipeline through his small farm but says he’ll wait until Vermont Gas claims eminent domain before he signs over rights to his land.

“I feel bad for IP,” Palmer says of the mill’s competitiveness in the face of rising fuel prices, “and maybe something should be done for IP, but I don’t see why it should be on the backs of your average Vermonter.”