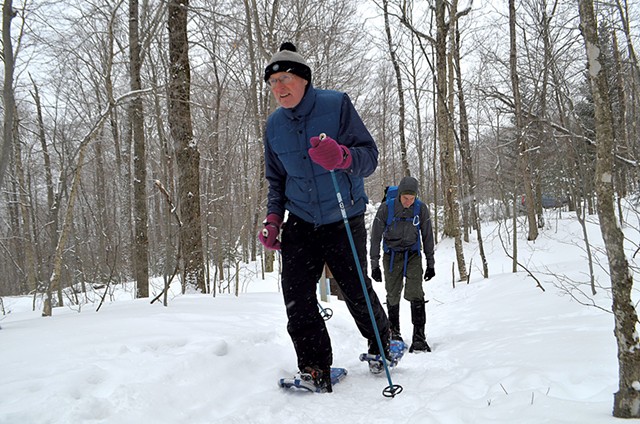 Just above the tree line on Camel's Hump last week, Curt McCormack considered turning back. The Burlington lawmaker had snowshoed up the mountain to within a couple hundred feet of the summit when a ferocious snow squall struck. He could barely move his fingers. His ruddy cheeks were so numb that he'd begun slurring his speech. An icicle of snot dangled from his frozen nose.

"Come on, Pop," his son, Jamie, shouted through the icy gusts. "We're almost there."

McCormack pulled on an extra parka and glanced up toward the unseen peak in the treeless distance. "OK," he said, and the pair turned up the snow-blasted trail.

Few who know McCormack would be surprised to hear he spent the legislature's weeklong Town Meeting Day break engaging in a highly inconvenient form of alternative transportation — or that strong headwinds failed to deter him.

In January, the 67-year-old Democrat, who has not owned a car since 2002, was named chair of the House Transportation Committee — a panel typically focused on highway maintenance and car-related issues. His assignment from House Speaker Mitzi Johnson (D-South Hero): to explore alternatives to gasoline-fueled vehicles.

"I was seeking somebody who understood public transportation and someone who was willing to really tackle head-on some of the transportation challenges in the state," Johnson said.

McCormack is eager to carry out that mandate. He'd like to speed the state's transition to electric vehicles and buses, expand commuter rail and Amtrak service, better integrate regional bus networks, and expand or improve bike lanes and sidewalks.

Many in Montpelier share his views, but not all share his urgency. McCormack describes climate change as an existential threat to the planet. His small, progressive state has a moral imperative to blaze a trail that others can follow, he argues.

"I think Vermont should stop patting itself on the back and start showing some real environmental leadership," he said.

A Heritage of Thrift

He shops at thrift stores not because he can't afford new clothes but because he hates the idea of perfectly good garments going unused.

During an interview at a café near his home in Burlington's Old North End, he tried to return his unused butter to the kitchen for reuse. He snagged a companion's unused napkin to use later as a tissue.

Curt McCormack inherited this thrift from his grandfather, John, an Irish immigrant's son who grew up on a small farm in Bethel. John later moved to New York, where Curt and his siblings grew up, but the farm remained in the family — as did the lessons he learned during summers there.

As a 17-year-old in 1968, McCormack fixed up a Volkswagen bus and headed cross-country. The van's starter soon failed, but instead of spending money to fix it, he and his friends just push-started it for the next six weeks.

As an adult, McCormack settled in Rutland. He began helping his landlord on construction jobs in exchange for lower rent and received his electrician's license in 1979. It was through electrical work that he became fascinated with energy use and began advocating for greater energy efficiency. He refused to install electric baseboard heating, which made it tough for him to work in the booming Killington area, McCormack said. And he often declined to install electric driers for people, reminding them how much more efficient gas — or, better yet, line-drying — was for the environment.

McCormack's involvement in a voluntary recycling program in Rutland sparked his interest in public policy. He won election to the legislature in 1983 and represented Rutland in the House until 1996.

During those years, McCormack worked to extend Amtrak service — the Ethan Allen Express — from New York State to Rutland. He opposed the former Rutland garbage-to-energy plant Vicon over air-quality concerns, fought the construction of Diamond Run Mall outside the city's downtown and spoke out against nuclear power.

"On all of those issues, he was seen at the time as kind of extreme," Dick said, "but today pretty much everybody shares what was Curt's view then."

McCormack left the House in 1996 to become the state Agency of Transportation's bicycle and pedestrian coordinator, and he later started his own environmental consulting firm.

He joined the Peace Corps with his second wife in 2005 and moved to Senegal, where the pair helped start a solid waste and organics program in a small city that had been in the habit of burning its trash in a wetland.

Living simply in Senegal and seeing how its residents got by with so little deepened McCormack's sense of how wasteful American society could be. So when he moved back from to the United States, newly single, he looked for a place where he could continue living a simple, car-free life. For a year he worked for the Peace Corps in Washington, D.C., where he rode the city's subway.

He moved to Burlington in 2008 and rehabbed a condemned four-plex on North Winooski Avenue, where he lives today within walking distance of coffee shops, restaurants and a grocery store.

McCormack is now one of two representatives from the most urban district in Vermont, comprising the heart of the Old North End and downtown Burlington, an area stocked with progressive voters who tend to share his values. First elected to his new district in 2012, he has been unopposed for reelection ever since.

On a walk around the neighborhood last week, he ran into former constituent Dave Przepioski, who met McCormack riding on the LINK bus to and from Montpelier. Przepioski said he loves that the legislator practices what he preaches.

He also chatted with Perri Freeman, who doesn't own a car either, about the free bus system in Akureyri, Iceland, and the pedestrian-friendly land-use policies of Pontevedra, Spain. "I always get so excited talking to Curt," said Freeman, a Progressive elected to the city council last week. 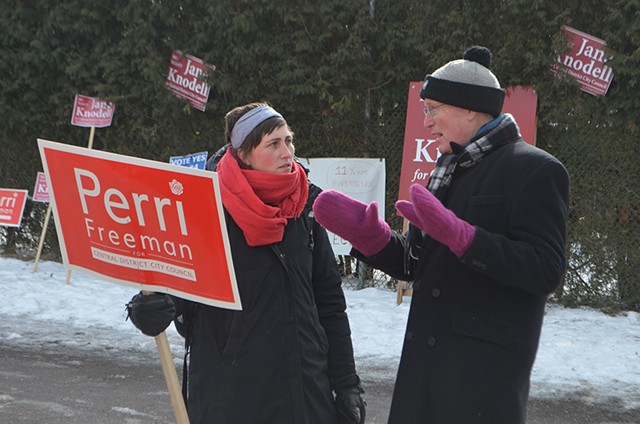 Speaker Johnson said she knew some might believe it controversial to choose a Burlington resident who doesn't own a car to chair a committee crafting transportation policy for a decidedly car-dependent state.

The state has made good progress upgrading roads and bridges in recent years, she said, and the time has come to focus on improving public transit.

Employers and residents have told her about the challenges lower-income Vermonters in particular face getting around, especially making connections between regional transportation networks. She figured someone with experience doing just that would be a good fit to lead the committee.

"When you have to do it yourself, you put the pieces together a lot faster," Johnson said.

How quickly McCormack and his committee can bring about such changes remains to be seen.

"They say he doesn't have a car, but that doesn't necessarily mean he's anti-automobile," Mazza said. "I think we can resolve our differences, if there are any."

McCormack already met with resistance to one idea he supports: raising the gas tax to improve local roads. He now doubts the committee will tackle that this year.

Other ideas he supports face significant hurdles, including extending Amtrak from Rutland to Burlington. That project is under way with a 2021 completion date, but issues remain, including complexities surrounding the restoration of passenger rail service long absent from the Burlington waterfront.

He is also hopeful that a commuter rail line can be established between Montpelier and Burlington, a project pushed by David Blittersdorf, founder of AllEarth Renewables and a major Democratic contributor. That project has its critics, however, with the conservative Ethan Allen Institute blasting it as a "boondoggle" that will serve few people and require steep subsidies.

The group feels similarly about plans to subsidize the purchase of electric vehicles for low-income and middle-income residents who might not otherwise be able to afford them, something McCormack strongly supports.

"It's really not fair to make people pay taxes so somebody else can get a car," said Rob Roper, the group's president. "The free market provides efficiency. When government gets involved, things get terribly inefficient."

Improving narrow transit corridors between population centers or replacing diesel buses with electric ones doesn't do much good for sparsely populated areas, which bear the brunt of service cuts when funding falls short, she said.

She likened the divide to urban residents who advocate for the latest wireless technology when many areas don't have reliable internet or phone service at all.

"I think Curt is very much trying to model for people being able to really use transit, and I give him kudos for that," she said. "Even so, I always remind him that he lives where that is an option."

McCormack says he wants to expand transit options in rural areas but acknowledges there will always be communities too small to serve easily.

For such areas, electric vehicles may offer the best solution. But while he believes EVs have the greatest chance of reducing the state's emissions quickly with proper incentives and charging networks, McCormack doesn't see them as a silver bullet for Vermont's climate woes.

An array of solutions will be needed, not only to dramatically reduce the state's emissions but to restore connections between people who drive in "cocoons," usually alone, back and forth between jobs in larger municipalities and homes in the "exurbs."

McCormack acknowledges that convincing people to relinquish convenient transportation in favor of environmentally superior options will be a huge challenge.

"I always tell my friends, 'It's not just for your convenience that you take Amtrak,'" he said. "'You also take it to help it stay alive.'"

After reaching the summit of Camp's Hump last week, McCormack embarked on an even more inconvenient adventure — taking public transportation to visit his partner in Bangor, Maine.

To do so, he walked to a bus that took him to the Amtrak station in Essex Junction and rode the train to White River Junction. Then he took a shuttle to Hanover, N.H., where he caught a bus to Boston. There, after walking around Chinatown, he boarded a bus for the four-and-a-half-hour ride to Bangor.

All told, the trip took about 12 hours. It's time well spent, he said. He raved about the views of the Vermont countryside from the train, as well as the chance transit offers to read or to meet people.

McCormack hopes that by reducing the inconveniences of transit, bicycling and walking, and also by stressing their myriad virtues, more people will embrace them.

"The more successful we are, the cleaner, safer and more pleasant our communities, not to mention the planet, will be," he said.