During harvest time, it's easy for most of us to feel almost overwhelmed with food — squash is ripe on the vine, apple trees are heavy with fruit, and we have more end-of-season tomatoes than we know what to do with.

That's not the case for the one-quarter of Vermont's citizens who don't know where their next meal is coming from. In fiscal year 2014, which ended last week, the Vermont Foodbank and its 270 member affiliates — food shelves, soup kitchens, shelters and in-school programs — served 153,000 unique hungry people, and an average of 18,700 in a typical week. In Chittenden County alone, 19,000 people are considered food-insecure.

"One in four Vermonters are using the emergency food system to survive," says the Foodbank's chief community impact officer, Chris Meehan. "You know many people who are using this system to make ends meet. The people we're talking about are our neighbors."

Foodbank CEO John Sayles says most food-shelf patrons are working people who have fallen on hard times. In most cases, he says, "it's not poor choices and bad habits that lead people here. It's that the jobs aren't there for people to support their families ... And we don't see them coming back in the short term."

Sayles and Meehan agree that the need is constant. Each season presents specific hardships: When school is out in the summer, for example, kids can't receive free or reduced-rate meals. But for many families struggling to keep food on the table, winter is the worst because of additional cold-weather expenses such as heating and snow removal.

Though many food-shelf patrons also receive help with their heating costs, Meehan says family finances require a constant balancing act. "They piece things together: I pull the food in from here; I can get my heating from over here... But it's never enough to cover all those expenses; something always has to give," she says. "It's a game of What can I put off today to pay this other bill? And that's exhausting, if you're trying to work a job and feed your kids, and then you're trying to figure that out day to day." 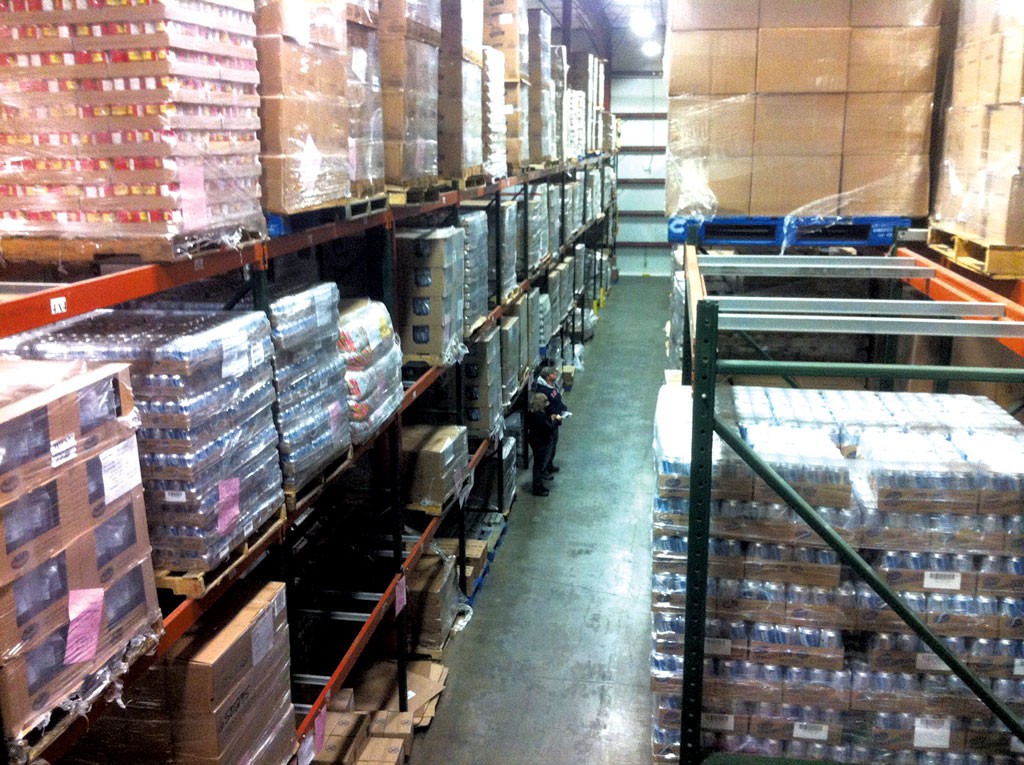 Chris Meehan's husband, Rob Meehan, is the director of the Chittenden Emergency Food Shelf in Burlington's Old North End. The largest such food facility in Vermont, it served more than 12,000 people last year. Rob Meehan notes that winter is harder not only for the patrons but for those running the place, too.

"We're dealing with the same challenges everyone else in Vermont is," he points out. Blizzards might knock out the power; Foodbank deliveries might arrive late or not at all if trucks go off the road or won't start. Volunteers can't always get to the center for their shifts. But because of the demographic the food shelf serves, closing means locking hungry people out in the cold.

"It's a bummer to close a facility that provides meals to people living in shelters or camps during the winter months," Meehan says. He notes that the season is the facility's busiest: "A lot more people need to come inside; it pretty much doubles when it's cold."

On the positive side, when winter sets in, donors become more aware of the hardships that others in their communities face. "This is our opportunity to talk about our issue," Meehan says. "This is when people talk about giving."

According to Sayles, the Foodbank brings in about 60 percent of its annual revenue between September and January. "It's wintertime, so people are thinking about nesting and being in their house with a warm fire and family around the table," he says. "They're giving thanks for the bounty that the rest of the year has brought, and it's traditionally a time of giving ... Not to mention the end of the year and tax planning."

Holiday donations keep the Foodbank afloat during the winter slump. "We do get donations in those tougher months," says Chris Meehan, "but if we didn't get what we get now, we wouldn't survive. We need to get just as much food out there in January as we do in November."

After the holidays, she says, mobilizing donors becomes more challenging.

Beyond the seasonal ebb and flow, however, is a more worrisome problem: As annual donations of both food and funds have been declining, the number of food-insecure Vermonters is rising.

"The need has grown," Sayles says, "so we keep growing to meet the need. During the financial crisis of 2008 to 2009, the Foodbank recorded a 60 to 70 percent increase in the number of people served." The number keeps climbing, despite the economic recovery.

"We've seen a lot more folks who never had to go to a food shelf before," Sayles says, and gives as an example of a fifty-something married couple he recently encountered. The husband had been laid off from his job, and his extended unemployment benefits were about to expire. "It's people like that," Sayles continues, "who used to be able to make those ends meet who aren't able to do it anymore."

Rob Meehan says he's even seen former food-shelf donors become recipients. "I've had people in this room ... who worked for a government agency who got laid off; who were crying because they never thought they would come here," he says. "And unfortunately, that's the growing face of hunger in America. It's everyone."

With more people in need, fewer private donations and reduced government assistance, Meehan says, "It's a bad scene; we're off the charts here."

Sayles says food supplied by the U.S. Department of Agriculture — items such as the notorious "government cheese" and peanut-butter tubs — has decreased in recent years, and so has federal funding for hunger-relief programs, including 3SquaresVT. In 2010, the Vermont Foodbank received $168,249 and 1.9 million pounds of food from the federal government. In 2014, those numbers dropped to $87,806 and 1.3 million pounds. In fiscal year 2013, federally supplied food represented only about one-third of the Foodbank's total distribution.

Nonprofits have been picking up the slack, gathering food from private donors and distributing it to the hungry. "No one else is doing this work," Sayles says. "In the past, it was largely federal programs that kept people fed."

Chris Meehan notes that when foodbanking began, donations arrived from food manufacturers, grocery stores and other sources, mostly goods with cosmetic damage, label problems or similar issues that would have made them harder to market. "It was all nonperishable food, but there was so much of it that food banks almost didn't know what to do with it," she says. "There was so much food."

In the past 30 years, the donation supply chain has grown and become more accountable (food banks must report all receipts to the donating companies). But that increased accountability has caused donors to begin protecting their bottom lines by diverting the second-rate food into secondary markets such as dented-can stores and Big Lots. As a result, "Those traditional sources of donated food have been drying up," Meehan says, "and we've been going through this transformation in the charitable food system."

On the flip side, produce donations have spiked. The Vermont Foodbank's Gleaning Program culls unmarketable, end-of-harvest produce from local farms and sends it to member facilities. In fiscal year 2014, the Foodbank provided more than 1 million pounds of produce to hungry Vermonters — a record amount, according to Meehan. "We've been focusing a lot more on produce because that's what's available," she says, and adds that the Foodbank is adapting its system to accommodate fresh, rather than nonperishable, foods.

Even so, Sayles adds, it's not enough. "Right now, at the height of the harvest season, we're getting apples and squash and lots of other produce, but we're still not meeting the need. We're never really meeting the need."