Fondue Is Hot Again in the Green Mountains 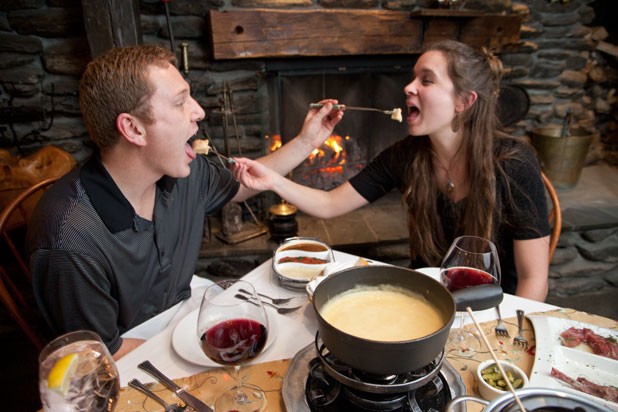 In many Americans’ minds, fondue went the way of the swinger party in the late 1970s. In the bell-bottom era, a communal dipping pot may have seemed an apt metaphor for the spouse swapping to come. But fondue is no mere fad: In Switzerland, the custom of dunking stale bread in melted cheese and wine goes back to at least the end of the 17th century. And now it’s making a comeback in Vermont restaurants.

When Restaurant Swisspot closed in 2008, it left an après-ski vacancy in Stowe that’s recently been filled by a few inns that serve the cheesy goodness to guests only, as well as two public fondue-serving establishments: Stowehof Inn & Resort, and Swiss Fondue by Heinz at the Gables Inn. (The latter will move to Café Latina, down the Mountain Road, in the near future. The café is already the site of Heinz Remmel’s daytime crêpe business.) In Burlington, the Skinny Pancake began serving fondue in 2007 and has continued to refine its $22-for-two “Skinny Dipping” weekends.

Heinz Remmel, the chef behind Fondue by Heinz, believes the recent recession took a toll on fondue. “It may have taken a dip for the past 10 years, maybe because this kind of dinner is not very cheap,” guesses the 50-year culinary veteran. “Any fondue that you will find is costly. It’s a lot of time involved — it’s an event.”

Remmel himself is working to cut costs without cutting corners. He keeps his fondue meals intimate, so there’s no need to hire staff, and staggers reservations for the dinners, which take place Tuesday through Sunday. That keeps things cozy for guests while reducing the workload for Remmel and his only helper — his wife.

Winter evenings are far quieter for Remmel now than they were in Switzerland. The Schaffhausen native worked for years in “a very strict fondue place” in Zermatt, he says, before running a catering business in Atlanta for 15 years, then moving to Vermont in 2007. In his homeland, the chef learned the discipline that makes his fondue the most authentically Swiss on the mountain.

Meals begin with other Swiss classics, such as air-dried beef, called bündnerfleisch, or that other melted-cheese dish, raclette, served with cornichons and pearl onions. Then diners choose from four different varieties of fondue. Remmel avoids fondue Bourguignonne for fear that the pot of peanut oil in which the meat cooks will “penetrate the curtains” with its odor. Instead, he sticks to rich chicken broth to cook the shrimp and thinly sliced filet mignon that make up his version of fondue Chinoise (known to fans of Asian cuisine as hot pot).

Remmel is particularly exacting when it comes to his cheese fondue. “The cheeses are all original. It isn’t local cheese or Wisconsin cheese. That is absolutely a no-no,” he says firmly. “You need to get the cave-aged cheese from Switzerland — over 180 days old before they’re ready. They’re a little bit expensive, but they’re worth it. The quality is top-notch.”

With quality comes intense attention to detail. To cut down on stringiness and give even more kick to the nutty flavors of the Alpine cheeses, Remmel adds soft vacherin cheese to his Gruyère and Emmentaler. He also doubles up on the booze in the pot, including not only cherry-flavored kirsch but hard-to-find Swiss Fendant wine. The rare Valais-made specialty, produced from a grape varietal called Chasselas, “is also a little on the expensive side,” Remmel admits. The cheese fondue comes with salad for $22 per person.

Remmel also makes chocolate fondue from 70-percent-cocoa Swiss chocolate combined with heavy cream and, if he’s feeling creative, Chambord or Grand Marnier. The top-flight ingredients are served with pineapple, marshmallows, pound cake and bananas in winter, with strawberries added in the summer.

Higher up the mountain, at Stowehof Inn & Resort, the fondue experience comes with a taste of fresh-air pursuits. At the après-ski destination on Edson Hill Road, both fine-dining Emily’s and casual Coslin’s Pub serve fondue. And even the laziest guests can work up an appetite by flying over the snow at high speeds.

Draught horses Jessica and Baby Doc (as in Haitian despot M. Duvalier) wait in front of the inn to alternate the duty of hauling guests dashing through the snow in a one-horse open sleigh. Each strong, friendly animal maintains a pleasant trot until it hits a hill, when the extra speed creates a roller-coaster effect. The stars are bright in the big mountain sky on the 25-minute ride, and horseman Paul Ruta talks about his hoofed “colleagues.”

Thoroughly chilled, guests are now ready for an immersive Alpine experience. Though a couple of fondues have been on Emily’s menu for a few years, says innkeeper CJ Grimes, last month the restaurant replaced chicken fingers and other American dishes with Stowe’s only wholly Alpine menu, complete with expanded fondue offerings.

Stowehof’s Alpine-inspired structure was built by Vermont architect Larry Hess in 1949. The low-ceilinged sitting and dining rooms feature maple trees complete with branches that serve as beams, creating a fairy-tale ambiance perfect for the creations to come.

According to chef Chad Baker, more than a decade of cooking in Stowe inspired the menu, along with time spent dining with his Swiss friends. He says the thin-pounded Wiener Schnitzel is the most popular dish among locals. The veal cutlet is highly traditional, as are the accompanying lemon, capers and anchovies. But Baker and his sous-chef, industry veteran Jason Gelineau, add uncommon twists in the form of fried, tricolor spaetzle and a topping of chasseur and cranberry sauces.

“We’re creating our own genre, almost,” Baker says. “It’s definitely Alpine cuisine, but we revamp it a little bit and absolutely have fun with it.”

The dishes do have a sense of whimsy. Former goat dairyman Gelineau created the delightful blueberry chèvre brûlée, an appetizer-size crème brûlée made of local goat cheese and blueberries. Both chefs have a penchant for the berries, combining imported fresh and frozen Vermont ones in a number of dishes.

Duck two ways, featuring tender, applewood-smoked breast and flavorful leg confit, is served in a rich blueberry-merlot sauce. The same sauce is one of the several options included with Baker’s fondue Chinoise, along with house-made mustard, aioli and Dijon-dill cream.

That fondue Chinoise is the standout among five fondues (including dessert) on Stowehof’s menu, including the oil-based Bourguignonne that Remmel eschews. In Switzerland, diners are unlikely to find broths made of anything but chicken or beef. But Baker uses the bones left over from veal, duck and lamb dishes to make his rich broth.

The result is more flavorful than the average fondue Chinoise, and Baker’s meats are also far from ordinary. Fondue Chinoise meats are usually sliced paper thin, rendering them slightly dry and less than flavorful. Baker avoids this by filling the pot with small chunks of well-seasoned beef and pork tenderloin, along with adorable mini-lamb chops. In the broth it’s easy to cook even the lamb to a beautiful medium rare, then dip it in savory sauce. Along with the crispy cake of aioli-drizzled potato rösti on the side, it’s quite a meal.

So is Baker’s Neuchâteloise fondue, a classic blend of Gruyère and Emmentaler with a rattling punch of kirsch. Luckily, there’s plenty of homemade French bread to absorb the booze. Crisp, tangy cornichons, served by the mini-bucketful, also help cut through the heavy main dish. Diners looking for fondue with local cheese can try the Stowehof Recipe fondue, which replaces Emmentaler with 3-year-old Cabot cheddar.

Or they can head to Burlington on Fridays or Saturdays, Skinny Dipping nights, when the Skinny Pancake serves fondue that stays true to its local mission. Though the Gruyère comes from Europe, the Pancake staff melts it with Taylor Farm Gouda, says director of operations Chris Benjamin. Kirsch is replaced by Vermont hard cider. The pot comes with slices of homemade baguette, focaccia and crêpe chips for dipping. An unconventional addition of vegetables, including broccoli, cauliflower and carrots, add some color.

And, in the end, that’s what fondue is all about. Benjamin links its revival to the popularity of shared small plates at tapas restaurants. “People like sharing lots of different flavors,” he says of the two currently ascendant Euro food trends. “And it’s cheese. Come on, who doesn’t love great cheese? Or chocolate, for that matter?”

If that person exists, he won’t be invited to our fondue party, that’s for sure.

The print version of this article was headlined "Melting Pot".