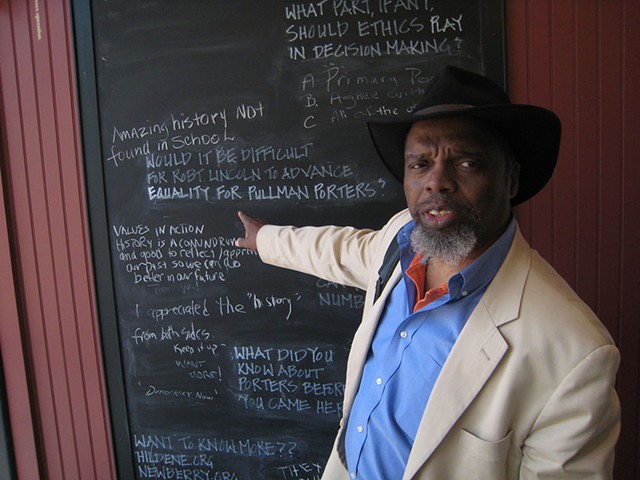 If you think about black history in America, Vermont is probably not the first place that comes to mind. The state has one of the lowest rates of racial diversity in the U.S. Nearly 95 percent of its residents identify as Caucasian, according to 2014 census data. Yet Vermonters — particularly in the greater Burlington area — have been accepting waves of refugees and immigrants into their communities, shifting that proportion. The state's future makeup looks a little less snowy white, and not just because of global warming.

Curtiss Reed Jr. believes that, as Vermonters look forward to more racial diversity, we might also become better informed about the state's African American past. The new Vermont African American Heritage Trail aims to do just that. A joint project of Brattleboro's Vermont Partnership for Fairness and Diversity, which Reed directs, and the Vermont Department of Tourism & Marketing, its curated self-guided tour includes 20 historic sites and museums from the Northeast Kingdom to the montane forests of Bennington County.

It offers everything from simple roadside markers to full-on museums, all of which reflect on the African American experience. An overarching mission of the project, according to Reed, the trail's "architect," is to encourage people of color to visit or even move to Vermont. After all, he points out, 10 of Vermont's 14 counties are experiencing a (white) population loss. "[That] has a severe impact on our tax base and ability to provide public services — basic things like roads, law enforcement, public infrastructure," he said. "So our job is [to] make Vermont an attractive destination for the multicultural marketplace."

One way to do that, he explained, is to let people of color know that the state's history overlaps with their own. That can be an uphill battle, he acknowledged. People of color from outside Vermont ask whether it's intentional that the state's population is predominantly white, Reed said. "Is there something about the progressive, liberal veneer of Vermont that says to folks of color, Nope, don't come here; this is the last bastion of white supremacism?" he asked rhetorically.

"That's a myth that's been perpetuated over the decades, when, clearly, we've been here since the 1600s," points out Reed, who is himself African American. "Our challenge is: How do we let people know that there's something here to see?"

That's where the heritage trail comes in.

None of the trail's sites were purpose-built. Rather, project organizers used history and geography to connect the dots of Vermont's African American heritage. In other words, the trail is not a physical thing but a grouping of thematically linked sites that highlights the complexity of black history in the state. To guide visitors, the state created a brochure guide, available at many locations or downloadable from VPFD's website.

Ferrisburgh's acclaimed Rokeby Museum, sited in the former home of a family of ardent abolitionists, is one of the trail's preeminent attractions. Others, such as the self-guided walking tour in Brandon of the birthplace of Abraham Lincoln's sparring partner Stephen A. Douglas, are more modest but still historically relevant.

Lincoln himself figures into the design of the trail. The president's son, Robert, built a 412-acre estate for his family in Manchester that's nestled into a picturesque nook between the Green and Taconic mountain ranges. Among the presidential exhibits on display at the home, called Hildene, is one of the three extant examples of the Great Emancipator's famous stovepipe hats.

Hildene also boasts a beautifully restored Pullman railroad car, a remarkable artifact of race history. During his 1897-1911 tenure as president of the Pullman Company, Robert Lincoln oversaw an enterprise whose racial politics were, for some historians, at odds with his father's abolitionist legacy. At the turn of the 20th century, no company employed more African Americans than Pullman. Yet working conditions were so unfavorable that critics of the day likened them to slavery. That's not a legacy of which Honest Abe would be proud.

Reed is aware of the seeming disconnect between "Vermont history" and "African American history," but he's undaunted. The Vermont African American Heritage Trail allows visitors to appraise the past, but its organizers have their eyes on Vermont's future.

"The next generation of schoolkids are the ones who'll be dealing with a much more multicultural environment," said Reed, pausing in front of Hildene's Pullman car. "Having them come here, or to Rokeby, or to Brownington [Academy in Orleans] to have this experience and to learn about not only the struggles and challenges but also the celebration of African Americans in Vermont — that's really important."

The partnership with Tourism & Marketing was a natural alliance, Reed said. Marketing efforts for the trail are largely targeted at out-of-state visitors, though he maintains that Vermonters have much to learn from the project, as well.

To that end, VPFD offers to Vermont schools a series of "cultural enrichment programs" that encourage students to learn about multicultural perspectives. One such program centers on the heritage trail itself; others, aimed at high school students, help learners detect implicit bias and understand the pervasiveness of racial stereotyping.

In April, Reed launched a still-ongoing online campaign to raise funds for the development of a smartphone app that would interactively guide visitors along the trail. Other outreach efforts include an essay-writing contest aimed at Vermont middle schoolers. This year's essays addressed the question of the persistence of racism, and how the country might move toward "a more perfect union." Winners of the contest, including first-place finisher Livia Greenberg of Stratton Mountain School, were honored at a luncheon at Hildene last Sunday.

In Reed's view, Hildene is one of the two most important sites on the trail; a small wooden building in the Windham County town of Grafton (population about 700) is the other. The latter modest structure, formerly a private home, now houses the Grafton History Museum. It contains many artifacts and archives related to Daisy Turner, one of Vermont's most famous African American residents and renowned storytellers.

Turner, who died in 1988 at the age of 104, lived nearly all her life in or near Grafton. Her parents were freed slaves who had settled in the tiny town and established themselves, against great odds, as prominent figures in its community. Turner was as charismatic and irascible as any Vermonter in history, as author Jane Beck reveals in her 2015 biography, Daisy Turner's Kin: An African American Family Saga.

The Grafton History Museum is actually one part of a twofer on the trail. Nearby is the 595-acre Turner Hill Wildlife Management Area, which encompasses the location where Daisy Turner once lived. Other sites on the trail include the Justin Smith Morrill Homestead in Strafford, Woodstock's River Street Cemetery and the Vermont Folklife Center in Middlebury.

To visit all 20 sites on the trail, visitors would need several days and a willingness to drive several hundred miles around the state. Or, you could knock them off individually as time permits. Either way, it would be impossible to visit these sites and not learn a great deal about Vermont and black history.

That dual focus is intentional, according to Reed. After all, Vermont's story and that of African Americans are intertwined.