Folklorist Stephen Wehmeyer Lectures on the Lives of Spirit Artists 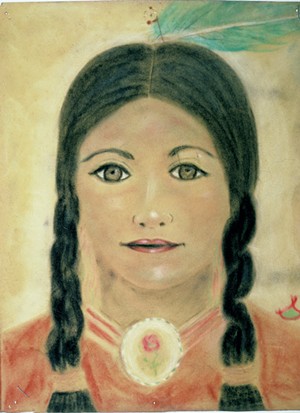 Artistic inspiration can come from pretty much anywhere. Romantic love is basically responsible for the entirety of popular music, give or take, and no small number of history's most important works of visual art were fueled by religious devotion. But what happens when the spirit that moves someone is, quite literally, a spirit?

That's the topic of "By Seen and Unseen Hands: Spirit Artists and Their Art in the 21st Century," a lecture that Champlain College associate professor Stephen Wehmeyer presents this Thursday, November 14, at the Henry Sheldon Museum in Middlebury. The free talk is part of the museum's ongoing fall exhibit of spiritualist art, "Conjuring the Dead: Spirit Art in the Age of Radical Reform," which runs through January 11.

Wehmeyer is a folklorist and ethnographer who focuses on vernacular religion and, specifically, the American spiritualist movement. He grew up in western New York close to Lily Dale Assembly, one of the oldest spiritualist communities in the country, and to Hydesville, which he says is considered "the epicenter of the American spiritualist movement." Now known as Newark, N.Y., the hamlet of Hydesville was home to the Fox sisters, a trio of mediums who helped popularize spiritualism in the 1800s. Their supposedly haunted cottage has become a tourist destination.

But Wehmeyer is less interested in ghost stories than in the stories that ghosts themselves might tell through the hands of "spirit artists," visual artists who claim to channel the spirits of dead people in their work. He is equally fascinated by how those artists work in the modern age.

"What really interests me most about religious belief, or the material culture associated with religious belief and practice, is how it functions in the everyday lives of everyday people," Wehmeyer says. "What is it like to be a spiritualist in the 20th and now in the 21st century?"

The visual arts have been a central component of American spiritualism practically since its inception. In the late 19th century, for example, famous mediums such as the Bangs Sisters traveled the country giving demonstrations in which they created "precipitated" paintings whose imagery seemed to materialize onstage, purportedly through the unseen hands of spirits.

"These pictures were exhibited as proof of the ability of spirits of the dead to influence the world of the living," Wehmeyer says. Noting the accusations of charlatanry directed at certain famed spiritualists, he adds, "Some of this was almost certainly illusion."

But if only some paintings were illusions, does that mean others were real spirit productions?

"As a folklorist, I'm not a debunker and I'm not an advocate," Wehmeyer says. "I'm not out to prove or disprove the existence of the spirit world. I'm interested in the human cultures and human societies and individual human stories underlying these practices."

Those are the stories he focuses on in his talk, which chronicles the research that has taken him all over the country. Wehmeyer has visited spiritualist communities in Los Angeles and Louisiana. He also spent considerable time at Lily Dale, where he observed and interviewed resident spirit artists, including the late medium Patricia Bartlett.

Bartlett worked by doing readings with clients and then channeling spirits of whom she drew pastel portraits. While drawing, she described the spirit and its role in the client's life, including their past relationship and the relationship she advised the client to have with it moving forward.

"What you ended up with is a piece of art that was understood to be a vision of the unseen," Wehmeyer says. He commissioned a couple of portraits from Bartlett and will display them as part of his talk, as well as describe the friendship the two formed.

Spirit art is about "engaging unseen worlds and human beings who have undergone the change called death, or nonhuman beings who exist in the spirit world," Wehmeyer says.

For his part, however, he's more curious about what happens on our mortal plane: "I'm really interested in the human dimensions."