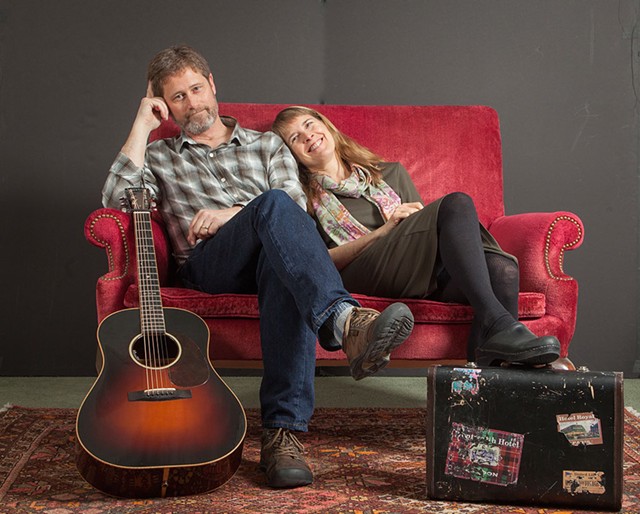 It's often said that you can't go home again. This isn't the case, however, for Dana and Susan Robinson. Once Vermont residents, they struck out individually for broader horizons, then established a shared national career as a folk music duo. Now they're back home, with a lovely new record, The Angel's Share, and a plan to take folk and traditional music in Vermont to a higher level. The Green Mountain State is already offering them a warm welcome.

Dana grew up in the Bay Area and knew early on that he wanted to be a folk musician. At the time he came of age, in the early 1980s, the northern California scene didn't seem ready for him.

"In the Bay Area, there was no model for anybody writing songs, performing them in clubs and making a living," says Dana. "Music was all on the big stage."

So he hit the road. He ended up in Northampton, Mass., where he found a blossoming singer-songwriter scene. He schooled himself at the venerable Iron Horse Music Hall, watching the likes of Bill Staines, Loudon Wainwright III and John Fahey. In 1988, Dana moved to Vermont, where he found an off-the-grid home on 30 acres near the Canadian border. He cut his first record and moved into the world as a solo artist.

In 1993, Dana moved to Asheville, N.C., where he leapt into a scene heavy with traditional influences. Within two years, he was recording and performing full time. The city played a big role in the growth of his career.

"Asheville's a magical part of the world," he says. "The climate. The mountains. The culture. The music. It's just spectacular."

That said, directions change. Dana's did when he met Susan Pufahl at a house concert in California in 2003. She had grown up in Manchester, Vt., was classically trained on piano, also played Scottish fiddle and was a folk music fan. Besides music, the two found they had something else in common: On the night they met, they talked about their mutual desire to return to Vermont.

"It took us a long time to implement the move," Susan says, a touch of humor in her tone. She moved to Asheville that year to join Dana and soon took up other instruments — banjo, mandolin and guitar. Soon the Robinsons were a pair, musically and romantically; they married in 2004. They released three records together and played more than 100 shows a year in the U.S. and Britain. It was a busy life — after a while, too busy. That's when the Green Mountains beckoned. In early 2015, the couple bought an old schoolhouse in Cabot and headed north.

"Moving back to Vermont was symbolic," Dana says. "We were both ready to change things a bit. We wanted to live and work closer to home."

It didn't take long for the Robinsons to settle in; after only a year, they've produced a new CD. The Angel's Share was laid down primarily at Tank Recording Studio in Burlington, with overdubs done at Colin McCaffrey's Green Room in East Montpelier.

On the inside flap of the CD cover, the "angel's share" is defined as "the amount of spirit ... lost to evaporation when the liquid is being aged in porous oak barrels." The title of the record is apt: The music is a sweet distillation of traditional and contemporary folk, and its spare instrumentation allows the Robinsons' rich vocals to rise like spirit into the air.

Made without a rhythm section, the record represents a conscious move toward simplicity. Both Robinsons contribute lead vocals. She plays guitar, mandolin and banjo. He plays the same, plus fiddle.

"I think it's difficult to make a good album with less," says Dana. "All the parts sound more naked, and more attention is drawn to the quality of the playing and the songwriting."

The arrangements "have to be organic," Susan says. "I see myself as kind of the band. I play the banjo to fit the pockets of Dana's songwriting."

Dana says his approach to the 12-track album's eight originals was more topical than usual. "River Flows On," a hopeful look at the potential of green energy, was inspired by a weekend the couple spent in a cabin on the banks of the Ohio, where they watched coal barges slide down the river toward a nearby electric plant. "John Muir's Walking Blues," inspired by Susan's work on water policy in California, speaks to the drought gripping that state's Central Valley.

Album opener "Going North" speaks to the couple's longing to return to Vermont. "I've had this dream ever since I was a child / I am always going north," sings Dana.

"I came full circle with Pete," says Dana. "He coproduced that first record I made in Vermont. Working with him again over 20 years later was very important to me."

Speaking of work, now that the Robinsons have slowed down on touring, they'll both be stepping into new day jobs. For Susan, it marks a return to the nonprofit world, doing freelance grant writing. Dana has taken a job as the new executive director of the Summit School of Traditional Music and Culture in Montpelier.

As for live performances, the Robinsons will support The Angel's Share with a southern U.S. tour, shows in Burlington, Montpelier and Barre, and a UK swing in the fall. They've also created a new music venue closer to home. Well, actually at home.

The Concerts at the Schoolhouse series, which takes place in the Robinsons' living room, has already hosted two shows and will present two more this year. Next up, on Tuesday, August 9, will be Texas songwriter Eric Taylor, in an event coproduced with Diana Winn's Dianaland.

"The schoolhouse was love at first sight," says Susan Robinson. "We walked into the living room, and the first thing we both said was, 'house concert.'" In the end that seems fitting. Odds are that their romance with Vermont might last a while longer.

The Angel's Share by Dana and Susan Robinson is available at robinsongs.com.

The original print version of this article was headlined "Going North"