Folino's Brings Its Pizza to Burlington 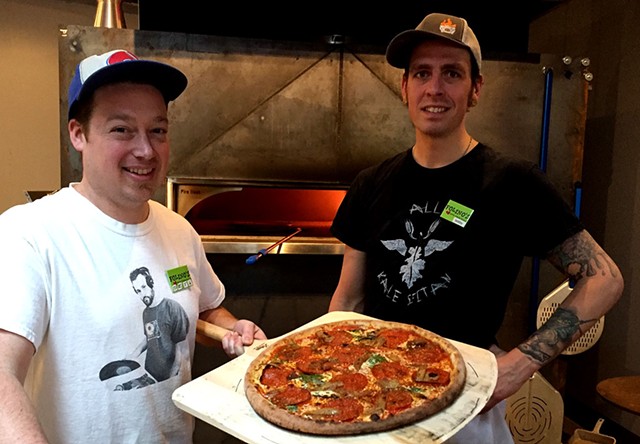 Folino's opened its Burlington restaurant last week at 71 South Union Street, bringing its wood-fired pizzas and salads to a second location in Chittenden County. The original Folino's opened in Shelburne, next to Fiddlehead Brewing, in March 2012.

The new Folino's, which opens daily at 11:30 a.m., occupies a former funeral parlor. The space was gutted and rebuilt, a construction project that started in spring 2017, according to general manager Seth Desrochers. The downtown Folino's, which employs about 20 people, does the prep work for both restaurants in its kitchen, he said.

"The energy in here — you could feel it," said Bobby Seaman, who was making pizzas that Friday night. "We had the vinyl going. It was fun."

Folino's is a family business owned by John Koerner and his wife, Carol, both of Charlotte; son Buddy; and daughter-in-law Sayuri. Both locations are BYOB. "I think it has a lot of charm to it," Desrochers said of that model. "It's affordable for people, and it's fun."

In the spring, Middlebury distillery Stonecutter Spirits will open a bar and lounge beside Folino's on South Union Street, Desrochers said. The two businesses will share a lobby in an arrangement similar to the one between Folino's and Fiddlehead in Shelburne.

"We wanted to find someone to work synergistically with," Desrochers said.

The original print version of this article was headlined "Folino's, Take Two"