Side Dishes: Crêperie opens in Shelburne 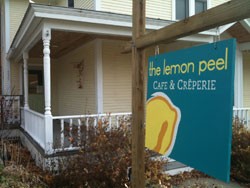 When Rob and Hilary Scharf first unveiled their French Farmhouse Crêpes cart at the Shelburne Farmers Market five years ago, it was more of a social venture than a money-making one. But “over the years, it got busier and busier,” says Rob.

So much so that last month, when a commercial space across the street from the market came up for lease, the Scharfs made a bold move: They opened a sit-down breakfast-and-lunch spot, the Lemon Peel Café & Crêperie.

The 25-seat eatery began serving on Falls Road last week with a menu of sweet and savory crêpes, cooked traditionally. For chef Rob Scharf, that means no more than three ingredients per crêpe, and if that idea seems fundamentally French, it is. “We lived in France for some years and really enjoyed the cream, the butter, the cheese, all of the food,” says Scharf, who is using the venue to whip up accompanying sauces he couldn’t produce on a cart.

The couple use as many local ingredients as they can find in their savory crêpes, which come with fillings such as ham, cheese, and egg; feta and spinach; gorgonzola and walnut; and tomato, mozzarella and basil. There’s also a hearty crêpe featuring black pudding, Shelburne Farms cheddar cheese and apples.

The Scharfs offer a sweet menu, too, with combinations of Nutella and bananas; honey, apple and cinnamon; and their most popular item — a lemon-peel, butter and sugar crêpe.

For the non-pancake-minded, the Lemon Peel has warm salads, soups and stews, as well as housemade breads, baguettes, croissants, coffee and tea. The menu may soon include a nod to Hilary Scharf’s home turf: a full Irish-style breakfast.