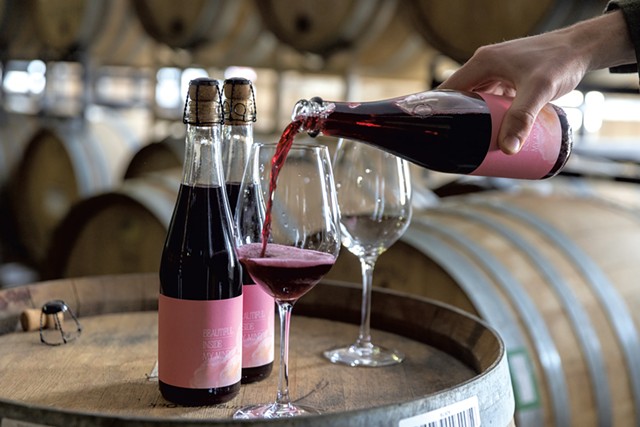 Todd Haire and Bob Grim traveled to Nelson, New Zealand, in April 2019 to look for hops for Foam Brewers. But they came home jazzed up about a different crop: grapes.

At a small winery adjacent to the hop farm they were visiting, Grim and Haire got a tour and a taste. The winery was the home of Kindeli, a much-hyped darling of the natural wine world.

"It was some real esoteric stuff," Haire said. The brewmaster, who also cofounded the small blendery House of Fermentology, is used to working with fruit as a beer ingredient.

Now, two years of farming Foam's own tiny vineyard have come to fruition. On February 11, the brewery will release its first wine under the label Natural Hack.

"A lot of the inspiration for the beers we create is pulled from the wine world." Bob Grim tweet this

Winemaking isn't a huge leap for the Foam team; founders and co-owners Haire, Grim, Jon Farmer, Dani Casey and Sam Keane are accustomed to doing "esoteric stuff" of their own. The Burlington brewery's tagline is "crafting imaginative beers for enlightened palates."

Beer nerds flock to the Lake Street taproom for an ever-changing roster of monster IPAs, wet-hopped brews, fruit-packed sours, and mixed-culture, barrel-aged beers from House of Fermentology, many containing ingredients grown by nearby farmers.

"A lot of the inspiration for the beers we create is pulled from the wine world," Grim said. "So it does feel normal to be making wine."

Foam's vineyard consists of about an acre of cold-hardy marquette vines in Hinesburg, just up the road from Red Wagon Plants. The property's owner, Paul List, gave the Foam team the go-ahead to manage his 13-year-old vineyard.

"It was vineyard CPR," Grim said of pruning, re-trellising and replanting the overgrown vines during most of 2020.

Foam's learn-by-doing approach to farming the one-acre vineyard is where the name Natural Hack comes from, Farmer said. The team members know a lot about brewing and working with local ingredients, but they aren't professional farmers.

"It was a bit of hack farming," Haire said.

Hack or not, they grew enough grapes to harvest in September 2020. The entire brewery staff got in on the fun, gathering in the vineyard to pick the fruits of their labor.

They brought the bounty to House of Fermentology's barrel cellar at Earthkeep Farmcommon (formerly called Nordic Farm) in Charlotte. From that point, the process wasn't much different from the fermentation, barrel aging and blending they normally do.

The team ran the grapes through a de-stemmer and crusher, then into a foeder, a 10-hectoliter oak barrel. It had held multiple runs of House of Fermentology's mixed-culture beer, brewed with Saccharomyces and Brettanomyces yeasts and lactic acid bacteria. Those resident cultures stuck around, and they went to work on the grapes for a spontaneous fermentation.

At the core of the team's farming and winemaking is the low-intervention philosophy popular among makers of natural wines. Instead of spraying chemical pesticides or fertilizers during the growing season, they handpicked Japanese beetles off the vines; the grapes, too, were handpicked. Postharvest, nothing was added to the juice during the winemaking process.

"We basically wanted to let this do its thing," Haire said.

The juice fermented on the skins in the foeder for about five days. Once fermentation subsided, the team free-ran the wine into smaller neutral French oak barrels, filling roughly eight. (In a side quest that's still aging, they combined the remaining grape must with a golden sour ale to see what would happen.) Six or seven of those barrels were blended down, Haire said, and aged for 12 months.

When they were ready to bottle the wine, the team primed the juice with honey from the apiary that Hare and House of Fermentology cofounder Bill Mares keep on the Earthkeep property. Their goal: to give the wine a bit of sparkle.

Now, almost a year and a half after their first harvest, the Foam team is preparing to release 1,000 bottles of Natural Hack's first wine: Beautiful Inside My Mind.

The biggest difference between fermenting a wine and brewing a beer is that you get only one shot a year at the former. That was a little stressful, the Foam team admitted.

"A lot of the House of Fermentology beers are also very small volume, and there's a chance they might not turn out to be what you want them to be as they age," Farmer said. "But your ingredients are stable, and you can brew throughout the year. With wine, you're crossing your fingers a bit."

The low-intervention approach paid off, though. The deep-red wine is unfiltered and contains no added sulfites. It's 12 percent alcohol, with high acid content, and it's got "a good funk to it," Haire said.

"Funk" is nothing new to fans of House of Fermentology's Dot series of beers. That quality comes from the Brettanomyces genus of yeast, which has a mixed reputation in the beer and wine worlds for its effect on flavor.

Some drinkers consider the presence of "brett" a flaw. Others seek out its funk, especially in natural wines and sour beers. According to the University of California-Davis Brettanomyces Aroma Wheel, the aromas it imparts can range from wet dog to sewer gas to citrus, clove and black pepper.

Beautiful Inside My Mind's funk falls on the pleasant end of that spectrum; it's more farmscape than barnyard. The first sip is almost prickly, thanks to the frizzante-like bubbles. The wine is tart and completely dry on the finish. The label recommends serving it chilled, between 40 and 55 degrees Fahrenheit. As it warms up, it develops more of the jammy notes for which marquette is known.

The 500-milliliter bottles are unusual for a wine but typical for House of Fermentology — though these bottles are clear glass, rather than the green or brown needed to keep beer from skunking.

"They're just the right size to share with somebody," Haire said. At $27 per bottle, the smaller size keeps the price point more manageable.

"We're not expecting a classic wine drinker to think that Natural Hack is the greatest thing to come out of the States," Farmer said. "But I think an audience already exists that enjoys a variety of fermented beverages and wants something low-intervention."

The team believes Beautiful Inside My Mind is a "joyous wine" rather than a serious one, Farmer said. It's perfect for drinking with friends; he and Grim have enjoyed it alongside bowls of ramen.

The wine will be on the list at Foam's next-door sister restaurant, Deep City. A small number of bottles will be distributed to select local restaurants and shops, including Burlington's Wilder Wines and Salt & Bubbles Wine Bar and Market in the Essex Experience.

Kayla Silver, the owner of Salt & Bubbles, wasn't surprised when she heard Foam was playing with grapes.

"The wine is, to me, a very natural part of their exploration of taste and fermentation," Silver said. "Yeah, they're brewers, but they're fermenters above everything else."

The two cases of Beautiful Inside My Mind allocated to Salt & Bubbles will be sold on the retail side rather than at the wine bar, due to the bottle's size.

Silver said the wine is "very Foam," with a ton of tartness, notes of "brambly" black and blue fruit, and that Brettanomyces character. She called it "almost lambrusco-style," an expression of marquette that's becoming more common among Vermont winemakers, evident in recent releases from Ellison Estate Vineyard and Stella14.

For these sparkling red wines, producers are picking the cold-hardy grapes earlier in the season. That means lower alcohol content and a brighter, fresher style. "They're not trying to make it like a cabernet," Silver said.

She's excited to see the beer crowd find its way to wine — and to have another Vermont wine on Salt & Bubbles' shelves.

"Foam's reach as a brewery is huge," Silver said. "The more winemakers we have giving it a real shot in Vermont — revitalizing old vineyard properties, producing in a more sustainable fashion — the better."

The Foam team was back in the vineyard last growing season. It plans to take the same approach with its 2021 vintage, keeping things small. Natural Hack's next release, likely to appear this spring, is a mead that's currently aging in clay amphorae with yuzu and honey from French Hill Apiaries in St. Albans. The team is also fermenting wild Maine blueberries.

"Our thing is beer," Haire said. "But it's interesting to see what we can do with these other ingredients."

"Now the space is true to its name as the House of Fermentology," Grim said with a laugh. "We've got all sorts of things going on."